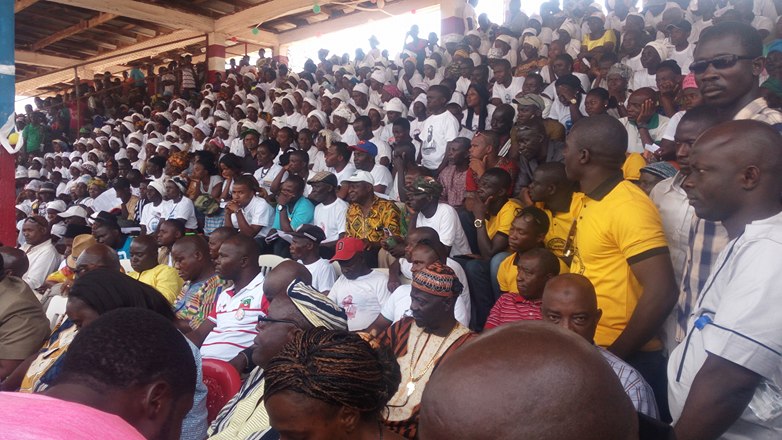 GBARNGA, Bong â€“ Representative Prince K. Moye of Bongâ€™s second electoral district has presented a report to constituents detailing his accomplishments over the past five years.

The event was held on Saturday at the David Kuyon Sports Stadium in Gbarnga.

In the report, the lawmaker told the citizens that from 2012 to 2016, he collaborated with other members of the legislature to sponsor and co-sponsor ten bills, including the bill that created Jorquelleh Administrative District.

He mentioned the construction of schools in Janyea, Gbeyenyea, Kollita-Wolah, Toloma, and annexes to the N. V. Massaquoi High School and the Multi Complex School in Sheansue Town as other achievements. Moye said he had also ensured that close to 200 Bong students at institutions such as the University of Liberia, Cuttington University, United Methodist University, and Stella Maris Polytechnic received scholarships and financial aid.

â€œFor scholarships in the grade schools across the district, we have paid L$4 million [US$38,835] for students,â€ Moye added.

Moyeâ€™s presentation of his report coincided with a petition by residents to contest in the 2017 elections. The representative accepted the petition and promised to be a â€œformidable candidate.â€

He said with the support of the citizens of the district, he would do even more developments and complete unfinished projects when reelected.

The petitioners referenced Moyeâ€™s achievements in the district in terms of education, health, women empowerment, and infrastructure as reasons to support his reelection. They also cited the provision of scholarships and tuition aid to students, financial loan to womenâ€™s groups, the construction and renovation of schools and clinics, and the rehabilitation of roads.

The speaker of the House of Representative, Emmanuel Nuquay, endorsed Moyeâ€™s second term bid and said in working with Moye at the National Legislature, he had found him worthy of trust.

â€œMoye and I worked together on the Budget Committee in the Lower House, and I know his potential and leadership ability,â€ the speaker said. Nuquay, a founding member of the Peopleâ€™s Unification Party, declared Moye as his partyâ€™s candidate in Bong Countyâ€™s electoral district two for the pending elections.

â€œEven though Moye is a member of the ruling Unity Party, but the PUP, through the governing council, has unanimously agreed to support him. If it causes me to sleep in Bong to make sure Moye is elected, I will do it,â€ Nuquay continued.

The second electoral district is the newest political and administrative district in Bong. Originally, the district was a part of Jorquelleh, but was later delineated by the National Elections Commission for the 2011 elections. The district then won administrative status in early 2013 as a result of legislation initiated by Moye.