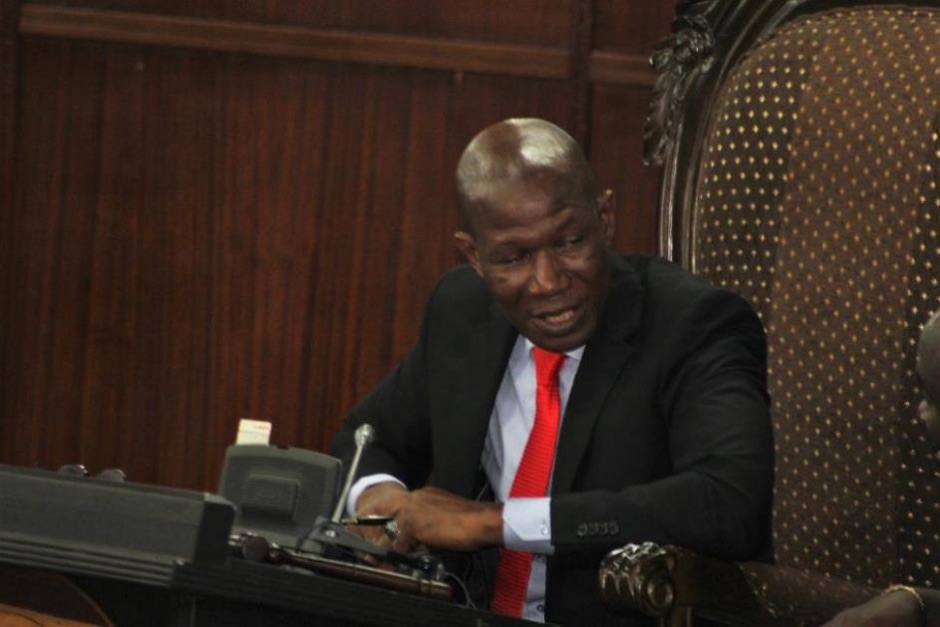 MONROVIA, Monserrado â€“ Several lawmakers within the House of Representatives are threatening to remove House Speaker Bhofal Chambers and Deputy Speaker Prince Moye for refusing to reduce their salary and benefits.

The lawmakers say they will mobilize signatures from their colleagues to oust the two men after they refused to reduce their salaries and benefits in line with a newly passed Harmonization and Standardization Act.

Speaking to legislative reporters minutes after the House closed for its annual break, Rep. Hanson Kiazolu of Montserradoâ€™s 17th district said the idea of salary harmonization emanated from the speaker and some members of the ruling Coalition for Democratic Change; therefore, they should be the ones setting examples for others to follow.

â€œOver the period, we the lawmakers, along with citizens, have been advocating for the reduction of salaries of lawmakers and government officials,â€ he said.

â€œWe have passed the Standardization Act and that should reflect the deduction in salaries of all civil servants and government officials. Up to the time, we closed today, civil servants have already started taking their July and September salaries, with deductions reflected.â€

Kiazolu further added, â€œAt the legislature, we have agreed in principle to reduce our salaries by 31 percent. While we welcome the decision, we have also captured that the speaker and his deputy are against the deduction.â€

The Montserrado lawmaker noted that Chambersâ€™ and Moyeâ€™s refusal to reduce their salaries comes even as theÂ judiciary has already agreed to reduce their own salaries by 16 percent, which he considers a reasonable amount.

â€œBeing the head of the Unity Party legislative caucus, which is the biggest political party in the legislature, I want to inform the public that Speaker Chambers maintained his salary at US$40,000 per month, which is US$29,000 as allowance plus US$15,000 for gasoline,â€ Kiazolu said.

â€œLet it be clear that we will resist it upon our return. There will be a resolution to remove them. The Liberian people will be informed as to why Speaker Chambers has been advocating for change so long and has refused to practice it.â€

River Geeâ€™s third district lawmaker, Rep. Francis Dopoh, also expressed disappointment in the speaker and his deputy. Dopoh said as a member of the Houseâ€™s Ways, Means, and Finance Committee, he worked with other members of the committee to ensure the harmonization process becomes a national program.

â€œThere are indications that the speaker and his deputy are not ready to take salary cuts,â€ Dopoh said. â€œI am here representing River Gee County not because Iâ€™m taking salary cuts, but itâ€™s the fact that we all have accepted this as a national program to help the economy.â€

Dopoh also said he wanted to work to remove the House leaders if they fail to reduce their salaries. He was joined by two female lawmakers, who condemned their leadersâ€™ actions in harsh terms.

Rep. Rustlyn Dennis of Montserradoâ€™s fourth district termed the House as a â€œshithole assemblyâ€ if representatives do not ensure that Chambers and Moye also take salary cuts.

Dennis said representatives were told by the Houseâ€™s Ways, Means, and Finance Committee that the harmonization process would reduce their salaries from US$8,500 to US$5,600, which all members agreed to, given the current state of the economy.

Rep. Ellen Attoh of Margibiâ€™s third district also saw the House leadersâ€™ actions as unjust and unfair to other lawmakers.

â€œAll the things we are doing here is not about individuals. When we decide to do something, everyone must do it,â€ she said. â€œWe are people of integrity and if the 73 lawmakers decide to do something, it must cut across. There will be serious action taken if it is proven that the leadership refused to cut their salaries.â€