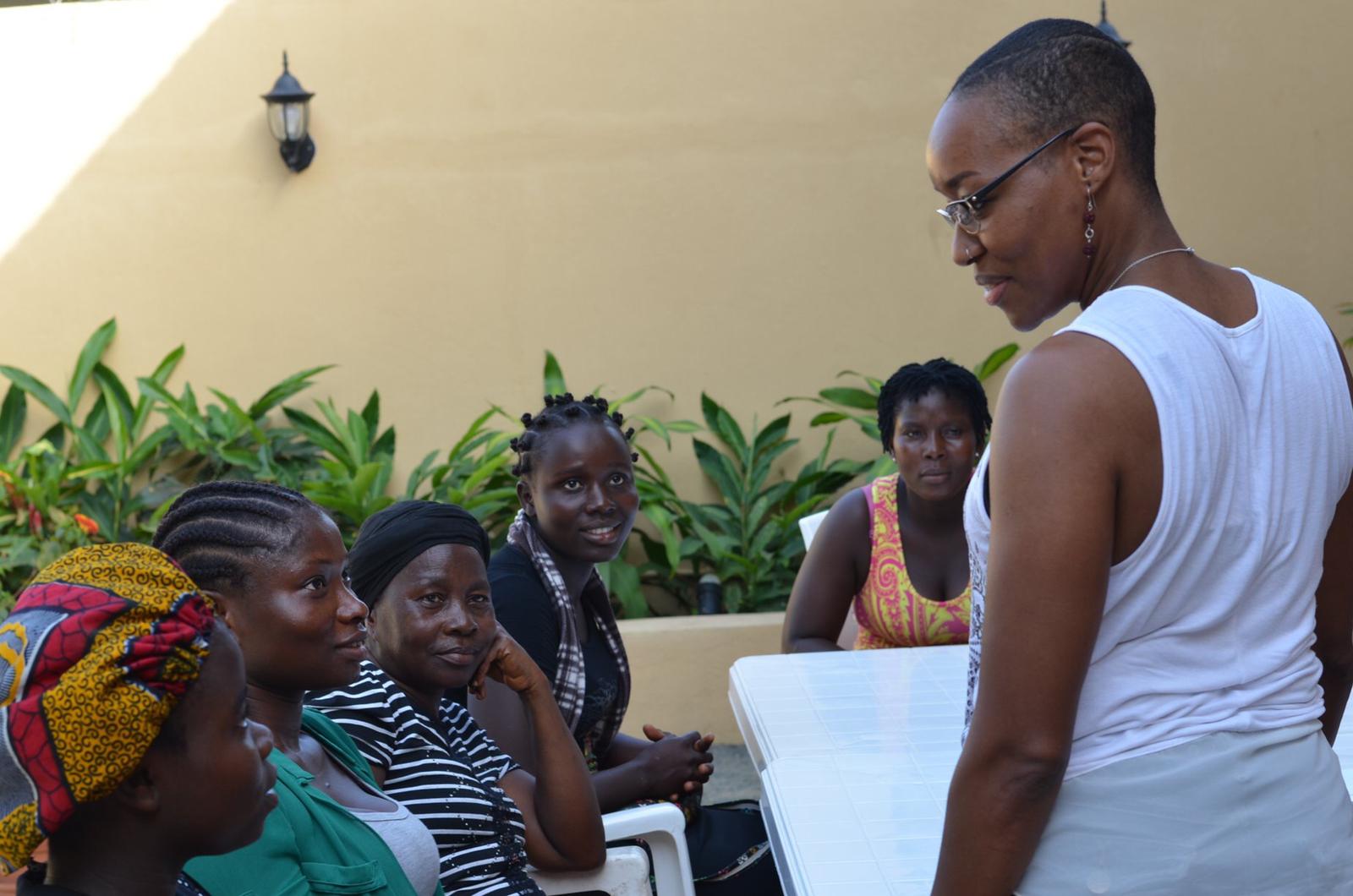 A middle-aged woman, Kou Zau sits before a camera for an interview. Sheâ€™s asked to spell her name. After a brief pause, she spells out, â€œK-O-U.â€ The interviewer then prods Zau to spell her last name.

A brief wave of embarrassment fills Zauâ€™s face before she concedes, â€œI canâ€™t lie to you. I donâ€™t know how to spell my paâ€™s name.â€

Zau is one of 10 potential women candidates who will be participating in a newly developed adult literacy program for women who live in the Airfield community. Shoana Cachelle, Zauâ€™s interviewer, embarked on this initiative after realizing how many women in her community lacked the most basic literacy skills.

â€œI didnâ€™t even realize it, but a lot of these women canâ€™t even identify the letter â€˜Aâ€™ or write their names,â€ Cachelle said during an interview at her Cachelle International Creative Arts Center compound. So much is the demand in the community that Cachelle received interest from so many women who wanted to participate. However, due to many constraints, Cachelle is starting with the 10 least advanced women to ensure the quality of the programming she intends to provide. She wants to run this program for a year â€œand document the transformation of these women through the process.â€

As the world celebrates International Womenâ€™s Day, Liberiaâ€™s women continue to lag in one crucial factor that plays a key role in development â€“ literacy. Only 54 percent of women between the ages of 15 and 49 say they can read or write â€“ significantly lower than the 77 percent of Liberian men who are literate, according to the 2016 Housing Income and Expenditure Survey.

Liberiaâ€™s situation is not unique; in fact, most of the worldâ€™s poorest countries share similar statistics. According to the United Nations, women comprise two out of every three adults who cannot read or write.

Experts in development note that having so many illiterate women is a major barrier for a country trying to eradicate poverty.

For the vast majority of the women who will participate in Cachelleâ€™s program, being literate will mean a sense of confidence. Cachelle told the story of how one of the participants had stayed in a job that paid her only US$20 a month because she felt inferior to her boss, who was a â€œbook woman.â€ Even though she knew she deserved more money, her lower sense of confidence kept her in the job for four months. She finally quit and was making four times the amount doing her own business.

â€œA lot of these women donâ€™t stand up for themselves,â€ Cachelle said, recounting how another woman was embarrassed by her illiteracy.

â€œSomeone had taken her to the police station and she couldnâ€™t write her name,â€ Cachelle added. That incident motivated the woman to go to school just to learn how to spell her first name. As soon as she learned it, she dropped out and sent her child to school instead.

â€œBeyond just teaching them how to read and write, itâ€™s building confidence â€“ also giving them some financial advice,â€ Cachelle described the program. â€œFor some of them, they have their businesses â€“ their markets and what not â€“ so just showing them and possibly investing in their businesses or trying to get investors that can help and be sponsors for their businesses.â€

She noted that she had partnered with the home care service provider Mipri to provide training and jobs to women who complete the literacy program.

Cachelle is funding this program through an event called GoGirlGrow that is being billed as a â€œcelebration of sisterhood.â€ Prominent Liberian women such as FACE Africa founder Saran Kaba Jones entrepreneur Aminata Toure Sackor, and will give short speeches at a cocktail hour event meant to inspire other women who want to learn from their experiences. The event takes place on March 9 at 4:00 p.m. at the Cachelle International Creative Arts Center on the Airfield Road (Cheeseman Ave). All funds raised at the event will be channeled into the literacy program. Cachelle is also accepting donations from those who cannot attend the event.

As for Kou Zau who desperately wants to learn to read, sheâ€™s hinging her hope for the future on this program. In characteristic Liberian English, she pleaded, â€œI want so lay people can help me to become somebody in lay future â€“ to know better. To be around my friend them. When I see paper, I muâ€™na say that different thing.â€

She added, â€œI want for them to sponsor me, for me to learn somethingâ€¦â€