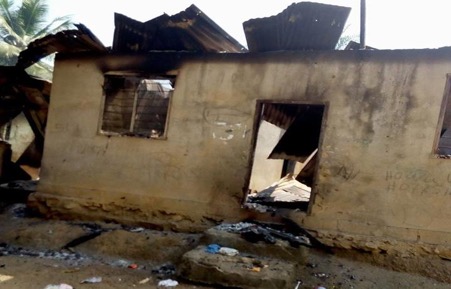 GANTA, Nimba â€“ During the morning hours of December 4, 2018, in the Public Works Yard community, an apartment building was destroyed by fire.

Witnesses believe the fire was caused by one of the tenants who had mistakenly left fire in a coal pot and placed it in a locked room before heading out.

George Tompo, Jr., the owner of the burned building in the second fire incident, told reporters that he was away when the incident took place.

â€œI left the house early this morning to go to the NTA [National Transit Authority] parking to get [a] ticket for my auntyâ€”she was due to go to Monrovia,â€ Tompo said.

Unable to acquire the ticket, Tompo said he extended his journey to the Ganta Sports Field to observe the training section of Nimba County Team.

â€œI left from there around 10 to 11 [a.m.]. I came and stood around [the] Sanniquellie Parking and saw the heavy fire around hereâ€”I knew that it was my house,â€ he said. â€œI went and started to do some background investigation on who left the fire in the house.â€

Tompo, who is a student at the Nimba County Community College, is now seeking â€œany assistanceâ€ from the public and well-meaning individuals.

â€œI am totally confused for now,â€ he added.

The building, according to Tompo, was constructed in the 1960s â€œbefore I was even bornâ€ and was one of the older buildings in Ganta before it was destroyed.

One of the victims, Norah Wehyee, a mother of two who has lived in the house for about a year, said she is frustrated about the incident and wishes that it had not happened.

â€œAll my things left in the house and got burned,â€ she said. â€œEven my money that I was keeping to buy my cement with itâ€”it left in the fire.â€

Wehyee is also seeking help from humanitarian institutions citizens, as she said she does not know where to begin her life at the moment.

Although Ganta is Liberiaâ€™s second largest city, the city has not been serious in combatting fire outbreaks. A substation of the Liberia National Fire Service was built in Ganta about two years ago, but it has no firefighting equipment.