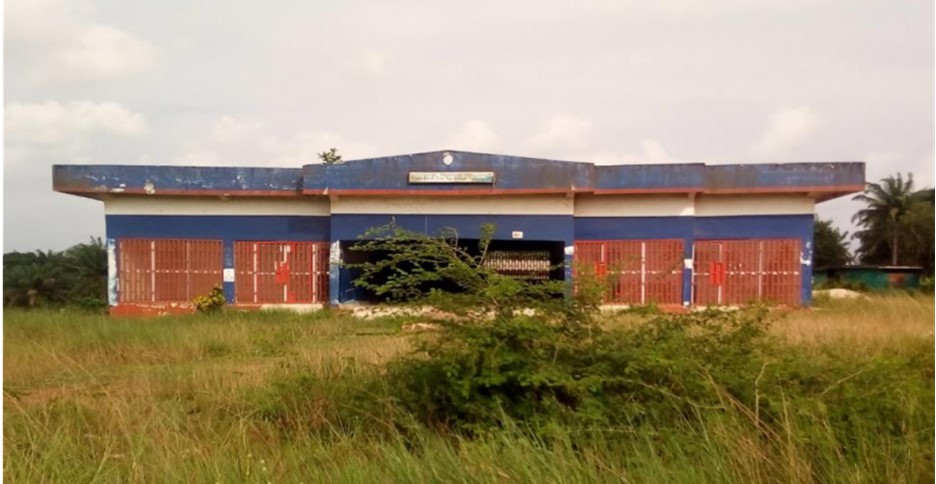 Citizens have complained that although the NTA terminals in Buchanan, Grand Bassa and Gbarnga, Bong have been completed, they were abandoned by the transit agency. Meanwhile, construction of a terminal in Kakata, Margibi remains stalled, eight years since the project began.

Previously known as the Monrovia Transit Authority, the NTA was transformed into a nationwide transportation system by an act of the legislature in 2009.

In April 2013, the agency began constructing Buchanan’s terminal through a private construction firm, Dougbor Group Incorporated, for US$97,219. The construction was completed and the terminal turned over to the NTA, but it remains unused.

Although NTA buses frequent the Buchanan to Monrovia route, passengers alight and board the buses at different locations along the streets of Buchanan instead of using the terminal. This happens even during heavy rainstorms, from which the terminal was designed to shelter passengers.

One reason the Buchanan terminal has never been used is the lack of proper planning and public consultation in selecting the location. Barley Tokpah, head of the local chapter of the National Civil Society Council of Liberia, said the terminal’s location is unsafe and not easily accessible.

Tokpah elaborated that the terminal’s location within the On Your Own Community, as opposed to a central and well-lit neighborhood, makes it an unsafe destination for passengers wishing to take trips during the early morning and late evening hours. The road to the terminal is far, dark, and isolated – all conditions that encourage criminal activities and attacks on them, Tokpah said.

He added that the decision of the terminal’s location was likely based more on where the government already had available land, instead of where was most suitable for a terminal that connected passengers from across Buchanan.

“From government to government, we’ve lack consultations at the local level,” he said. “Now that the road is not paved, [there’s] no electricity, and the building has been abandoned, I can say that it was not appropriate to build it there, taking into consideration the prevailing circumstances.”

He called on the NTA management to take responsibility of the situation because they did not conduct the required assessments before constructing the terminal.

Emmanuel Wragboe, a Buchanan resident, recommends that the heads of the agency who initiated the terminal project be made to pay for the taxpayer funds they wasted.

“This is [a] waste of taxpayers’ money,” he said. “If you are carrying development somewhere, you need to send your assessment team to do an investigation as to whether the place you want to do the development will be conducive for the people.”

Like the Buchanan terminal, the Gbarnga NTA terminal that was constructed under former managing director Karmo Ville’s administration is not being used. Bong County Youth Coordinator Dakai Mulbah described the abandoned terminal as a waste of public funds and blamed poor planning.

“The government used a lot of public resources to build this terminal, and it has been abandoned by the NTA itself and the citizens – it is a complete waste of public funds,” Mulbah said.

“The government cannot be spending a lot of money on something that is not conducive for the people. Now you see the people sitting under the rain, sun, and on the road awaiting car – it is wrong.”

The Gbarnga terminal is located on the Lofa highway, a significant distance from the center of the Bong capital.

“If the citizens were involved, they couldn’t have allowed the terminal to be built in that area,” Mulbah noted. “If you want to carry out development for a group of people, involve them. Anything that is not done properly is not done at all.”

Mulbah laments that so much government resources were wasted on buildings that would never be used: “That money should have been used on something different that would have improved the lives of the people.”

Meanwhile, in Margibi, residents still wait in the rain and scorching sun to board NTA buses. The construction of an NTA terminal has remained stalled for years.

In 2013, construction of the Kakata terminal began but was interrupted during the 2014 Ebola outbreak. Seven years later, the project has remained on hold even though Ebola was eradicated from Liberia in 2015. The Dougbor Construction Company, which constructed the Buchanan terminal, also won the bid for the terminal in Kakata that was funded by the National Oil Company of Liberia, NOCAL.

In 2017, NTA’s then public affairs officer, Robert Wilson, told The Bush Chicken that the oil company agreed to fund the construction of terminals in Kakata and Bo, Grand Cape Mount.

The head of Margibi’s chapter of the National Civil society Council of Liberia, Friday Cursor, says he is concerned about the unexplained delay in the construction of the terminal.

NTA’s managing director, Herbie Teconbla McCauley, has turned down a request for a face-to-face interview to respond to concerns of abandonment of the terminals in the counties. Via text message, he blamed COVID-19 for the construction delay.

“Due to COVID, our partners that [are] supposed to carry [on] the project [have] been unable to because of the travel restrictions in China. However, as soon as things improve around the world we can assure our customers those projects will be undertaken,” he wrote.

McCauley refused to address the abandonment of already completed terminals. However, in 2018, the agency’s then corporate communications officer, Jimmy Tybalt, who is now operations manager, admitted in an interview that NTA had abandoned the terminal in Buchanan. Still, he blamed Ville, the former managing director, for authorizing the project. He told The Bush Chicken that the current administration would decide on the way forward.

This story was collaboration with the Center for Transparency and Accountability in Liberia (CENTAL) as part of the Ant-Corruption and Investigative Journalism Fellowship with founding from Sweden Sverige. The sponsor has no import in the story and does not necessarily reflect her views.