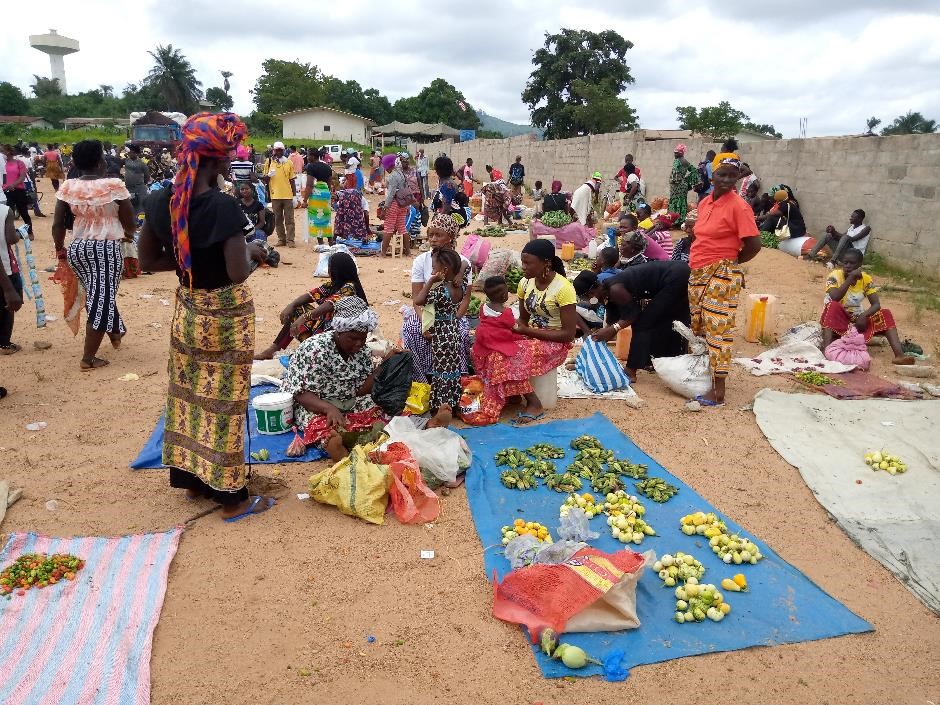 VOINJAMA, Lofa – To ensure social distancing during market day, authorities in Voinjama have asked traders to use an open sports field to set up their market, instead of convening at the Voinjama Central Market, which often becomes overcrowded.

Lofa has now reported two confirmed cases of COVID-19 (both of which are deaths), and even before those cases, authorities in the county’s capital city began strategizing on how to ensure that the public could still have access to essential commodities while being safe.

In rural Liberia, one day a week is considered market day, where traders travel from nearby towns and villages to convene at a major city. In Voinjama, market day is Friday. Lofa’s superintendent, William Kamba, said he worked with the Liberia Marketing Association branch to implement the new measures for market day, which he said allows traders to maintain a six-foot distance apart from each other.

“This measure is not to scare anyone from his or her business, rather to effect the health protocols against COVID-19, and even with this measure, transactions at the open field will only take place on Friday of every week,” Kamba added.

Kamba also advised traders to wear facemasks as they interact with customers. He also asked the Liberia Marketing Association to sketch positions on the ground where traders could set up to make it easier to maintain social distancing.

May 15 was the first market day that the measure was in effect. The LMA’s Kormassa Jallah struggled to have traders comply with the new rules, especially when it came to wears masks.

“Many marketers are complacent,” she complained.

Several traders who spoke to The Bush Chicken did not think the measures were being properly implemented. Additionally, many were concerned that they were losing customers by switching to this new location.

Domowah Tennie, who trades in pepper and bitter ball, observed lower purchases because she said her customers were not used to her new location.

“Can you count how many people are wearing nose masks and having some social distance?” she added, pointing out that the measures were not being followed. “We want to go back [to] where we came from because nothing has changed.”

Another trader, Korto Johnson, said she was not happy with how the information was disseminated to traders.

“They did not tell us on time,” she said. “We need such information early so that we can be able to rely directly [on] our out-of-town customers.”

“It is the same normal activity, and nothing has changed with social distancing and wearing of nose masks,” Jallah added. “And so let us be left alone to carry out our normal activities.”

For truck driver Mohammed Kanneh, the new location made it difficult to speedily load vehicles; however, he recognized the value in the new preventative measures.

“It is good that we follow the preventive measures of COVID-19 in order to remain safe,” he added.

May 22 was the second week the measures were in place. This time, the county had just recorded its first two cases. There seemed to be a greater number of people at the markets wearing masks this time – approximately half. However, the market has struggled with decongesting despite the level of awareness carried out by authorities.