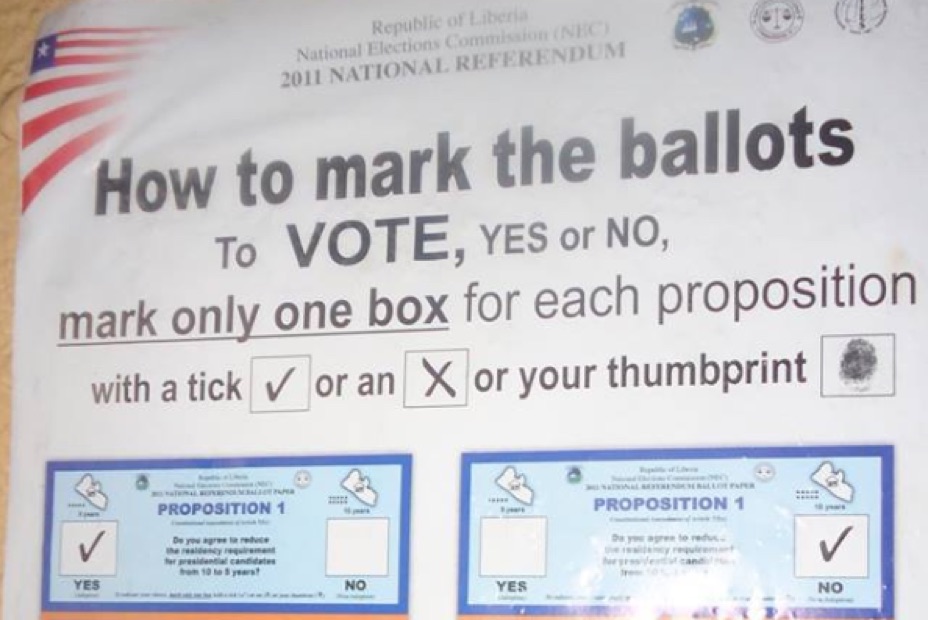 MONROVIA, Montserrado â€“ At the official opening of a special presidential retreat held at the Farmington Hotel over the weekend, President George Weah appealed to members of the National Legislature to approve eight revised propositions for referendum to amend the 1986 constitution.

Among the propositions was a proposal to abolish by-elections. Weah suggested that instead of holding by-elections, vacancies created in the legislature as a result of the deaths, resignations, or expulsions of lawmakers should be filled by appointment by the â€œduly elected county councilsâ€ in a period of 90 days from the time the notice of vacancy is announced by the presiding officer of the Senate or the House of Representatives.

The new Local Government Act provides for the creation of county councils, but that law has not yet been implemented.

The president did not provide reasons for his proposal to abolish by-elections in the legislature. But Montserradoâ€™s eighth district representative, Acarus Gray, a senior member of the presidentâ€™s Coalition for Democratic Change, had appeared on OK FM to talk about the proposed legislation, ahead of the opening of the special presidential retreat, in Margibi.

The constitution prescribes that whenever there are vacancies in the legislature caused by death, resignation, expulsion, or otherwise, the National Elections Commission should be notified within 30 days. Additionally, the commission is required to hold a by-election not later than 90 days, except if general elections are expected with that 90 days.

However, Gray said conducting by-elections has been too costly for both the past and present administrations. In the last two years, for example, he said there has been six by-elections conducted, costing the government nearly US$8 million, with the July 29 by-elections in Montserrado accounting for US$2.5 million. The by-elections, according to him, are not budgeted.

Gray said the proposition also requires that in order to fill a vacancy caused by death, resignation, expulsion, or other reasons, the party of the lawmaker creating the vacancy would nominate a replacement. He said the countyâ€™s legislative caucus would, however, decide the replacement if the lawmaker being replaced was an independent candidate.

He said contesting by-elections has become a tradition, especially where seated representatives are contesting for senatorial elections.

â€œThe legislature must act before October for the mid-term elections and the referendum to be conducted together to reduce cost on government. This is the most important time to do it if we want to avoid financial cost,â€ he said.

President Weah and members of his party have directly contributed to a number of by-elections created in the last two years. Following the election of Weah as president, Saah Joseph, who at the time represented Montserradoâ€™s 13th district at the House of Representatives, was nominated by the Coalition for Democratic Change to fill the senatorial slot in the by-election. Josephâ€™s election as senator also created another by-election in the 13th district. Weah himself also appointed a sitting senator of Sinoe, Joseph Nagbe, to fill a vacancy on the Supreme Court, creating another vacancy that caused a by-election in the Senate.

The Election Coordinating Committee, a coalition of local civil society organizations that deployed the highest number of local observers in the 2017 general elections, agrees with the president on his proposal.

In a release, the ECC said by-elections are characterized by low turnouts and place a huge financial burden on the government. The group commended the president for the reform idea, noting that it was necessary for the consolidation of the countryâ€™s fragile and emerging democracy.

However, the ECC called on the president to recommend to the National Legislature a comprehensive amendment to the constitution, in order to avoid constant changes to provisions within the law and to minimize the financial costs.

â€œA broad amendment to the constitution will create the opportunity for far-reaching legal reforms including a change of the election date (Article 83A) and removing it from the constitution, the removal of judicial powers from the National Elections Commission in the resolution of electoral petitions (Article 83C), the elimination of the racist clause on citizenship (Article 27B), limit the appointing powers of the president so that superintendents and city mayors can be elected in pursuit of full political decentralization (Article 54C),â€ the ECC said in the release.

However, the Alternative National Congressâ€™ deputy secretary, Jonathan Dolakeh, condemned the proposition, noting that it wasn’t formed from good intentions.

According to Dolakeh, the ANC does not see the idea of political parties replacing dead lawmakers as a strong point, especially when this administration was the one that started creating rooms for more by-elections in the country.

â€œThe idea is deceptive because the persons pushing for this amendment were supporters of the creation of by-elections. Because they are unable to pay civil servant, they are finding way to save,â€ he said.

â€œAs opposition, we warned the president against it [the appointment of Senator Nagbe to the Supreme Court] â€“ that it will undermine the growth of our democracy. But he did not listen to us and now this.â€

Dolakeh thinks the ruling establishment, the opposition political parties, and other stakeholders need to come together to jointly discuss major reform ideas.

â€œWe need to play smart as a country,â€ he noted.

At the same time, an independent candidate in the recent senatorial by-election in Montserrado, Mohammed Dukuly, said the presidentâ€™s proposition speaks to the reality of the CDCâ€™s inability to undergo development and maintain state power.

â€œWhen did he [Gray] come to realize that [a] by-election is costly? Or is it because the government has started to lose grants from donors? It doesnâ€™t make sense at all. Itâ€™s a clever attempt to stick to power in an illegal way,â€ he said.

According to Dukuly, votes obtained by candidates to win elections are a combination of efforts from their parties, partisans, and non-partisans, as well as supporters of other parties. He said it would be unfair to make a party solely decides the replacement of an elected official.

â€œAllowing the caucus to decide who fills the vacant seat of an independent candidate is more chaotic than the word chaos. It is a tactic for a one-party system because the ruling establishment has nothing to offer the people; they lack confidence in themselves of winning any election again,â€ he added.

Joseph Morrison, a voter in Monrovia, also termed the proposal to abolish by-elections as being selfish and not in the interest of Liberians. Such amendment, according to him, would contribute to chaos.

â€œYou know how greedy our people are for power â€“ they will start to kill one another just to get the seat because they will not need an election to get there anymore,â€ Morrison told The Bush Chicken in an interview.

A resident of Paynesville, Daniel Kollie, however, agrees that the amendment would cut down on â€œwasteful spendingâ€ for the government.

Kollie believes that Liberians stand to benefit if funds that would have been spent for by-elections are diverted to improve agriculture and reshape the countryâ€™s economy.