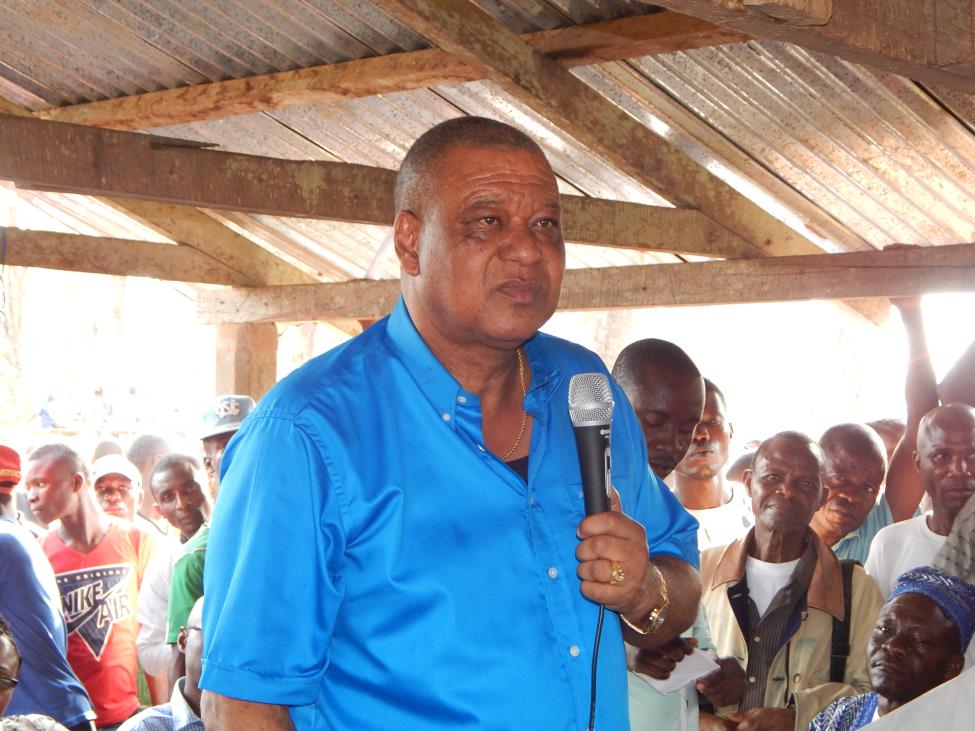 HARBEL, Margibi â€“ Benoni Urey, the political leader of the All Liberian Party, has promised to provide better lives and job opportunities for Liberians if elected as the countryâ€™s 23rd president in October.

Urey made the commitment on Sunday when he addressed a group of workers in Division 38 camp in Firestone at a ceremony to endorse the candidacy of Joseph Phillips to represent Margibiâ€™s third district.

Urey said if elected president, his administration would provide better jobs that would give more money to Liberians. He said this goal would be achieved in part due to the provision of improved quality education for young people. He also guaranteed better infrastructure.

â€œThey will have better hospitals to go to, and they will have more roads and less costly food, especially the countryâ€™s staple food, rice, [of] which [the] cost is so high,â€ Urey said. Urey said now is the time for citizens to stop paying for the luxurious lives of corrupt public officials.

According to the presidential hopeful, revenue cannot only be increased by increased taxes, but rather by creating and enabling an environment where people will invest.

â€œThe more people come to invest, the more revenue the government can generate, and they will stimulate the economy and the industrial wheel will start turning once again, and we will say, â€˜Oh, Liberia is coming back on track to where it used to be,â€™â€ Urey explained.

Ureyâ€™s statements to promote his candidacy runs counter to the reputation he has built and previous statements he has made.

In the past, he has been accused of profiting off his close ties with former President Charles Taylor and siphoning government funds for his personal gain.

Urey has also not exactly been known for populist ideas or policies. He previously called for the return of the freemasons to control the country politically as was done for decades in the past, excluding many Liberians of native descent and enriching and empowering their own members.

Moreover, contrary to his promise to lower taxes on citizens, Urey, who chairs the board of telecommunications company Lonestar Cell MTN, lobbied for a one-cent per minute tax on all phone calls â€œas an avenue for strengthening the economic gains of the country,â€ according to a Lonestar press release.

The imposition of the tax has angered Liberian consumers and is causing a public relations nightmare for Lonestar and is generating protests.

Concerning the upcoming voter registration exercise, Urey said while he understands that there are citizens who plan not to participate in the exercise because of the frustration with the current and past regimes, citizens must use this yearâ€™s election to change their own lives.

â€œBeing angry with the system cannot change it, it only perpetuates it,â€ he said. â€œThey must come down. They must sacrifice once more. Letâ€™s give it another chance. I am appealing to them to come out and vote for a change.â€ For his part, Phillips said his intention to run for a seat in the House of Representative stems from a desire to provide better workersâ€™ representation in government.

â€œI am in this race because of the workers,â€ he said. â€œYou too deserve a better life.â€

Phillips encouraged residents of the district to get involved and take charge of their own destiny.

Meanwhile, the districtâ€™s former representative, Saah Richard Gbollie has announced his support for the All Liberian Partyâ€™s candidate. He informed the people of the district that he would not be a candidate in the October elections, but encouraged his supporters to vote for Phillips.