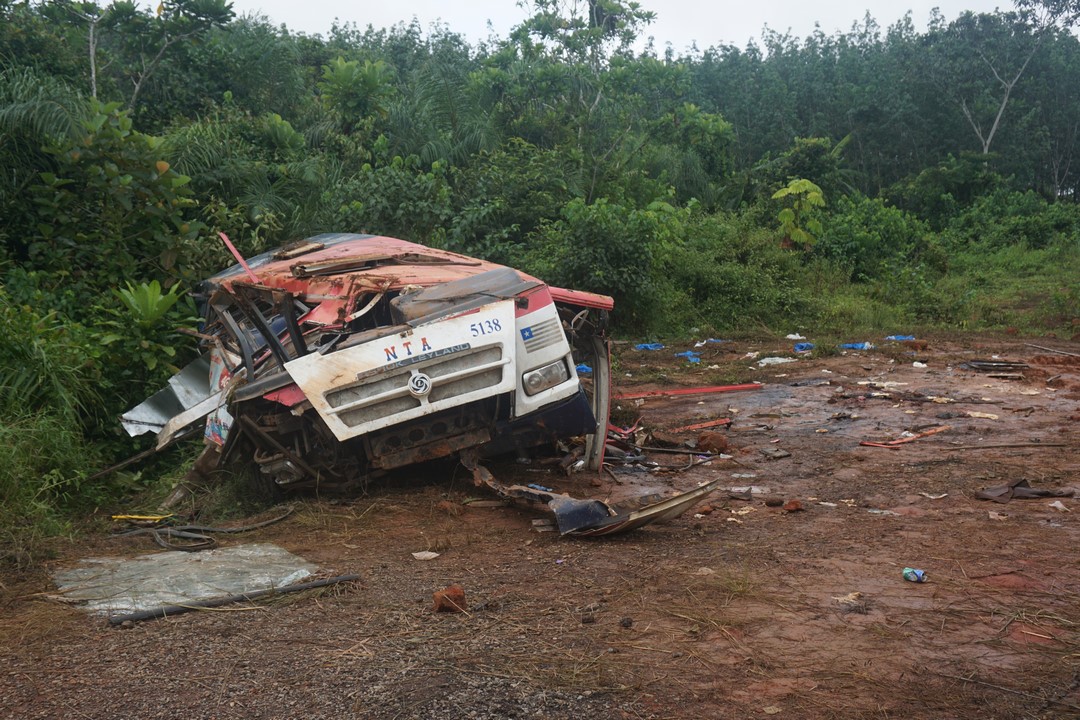 MONROVIA, Montserrado â€“ On August 4, a National Transit Authority bus crashed on the Ganta-Monrovia highway in one of the worst cases for the NTA in recent history. Since that accident the agency has made several moves to improve safety on its buses, however, transportation experts say the authority could do more to develop its guidelines.

According to the authorityâ€™s initial report, six passengers died, and 55 were injured out of a total of 68 people on board. The bus was headed for Ganta and the accident took place near the town of Zeanzue in Bong County at approximately noon. According to the Liberia National Police accident report, driver Robert Larmie was responsible for the crash as a result of speeding, reckless, and distracted driving. The police report also updated the number of passengers on board to 84.

In an interview immediately following the accident with the Managing Director of the NTA, Tarnue Jeke, he revealed that the NTA has several pre-trip inspections that are conducted before the vehicles are dispatched. Transit patrol officers also perform checks before drivers take vehicles out.

However, NTA does not conduct drug or alcohol testing because of the lack of the proper equipment. â€œWeâ€™ve been short on that because we donâ€™t have the equipment,â€ Jeke said. He added that this accident has prompted the Board of Directors to ask the authority to look into procuring the necessary equipment and establishing various procedures to screen drivers and operators for drug and alcohol. In a November interview with Robert Wilson, the NTAâ€™s Corporate Communications Officer, he disclosed that the procurement was already underway.

In the past, the lack of proper equipment has led to disputes with the employeesâ€™ union over the dismissal of employees even when they were visibly drunk. In those cases, the union has contended that NTA had no way of objectively proving that the employees were drunk. â€œThe Labor Ministry came in and said we didnâ€™t have the authority,â€ Jeke explained. Passengers try to board an NTA bus. Photo: Jefferson Krua

Besides pre-trip inspections, Jeke said safety precautions such as a ban on personal cell phone usage are in place and can be found in the employee manual. â€œJust today, weâ€™re suspending someone for three months for talking on the phone and driving,â€ Jeke added.

The accident itself destroyed Bus 5138 beyond repair, but that should not have any impact on NTAâ€™s operational capability as the Turkish government recently provided 16 new buses to NTA. At the time of the accident, Jeke said he was wary that the accident would hurt the image of the authority. But, he said, rather than be afraid of riding the buses, the public should use this opportunity to learn about their rights and the rules that drivers are required to abide by. He especially wants to encourage passengers to call the hotline when their rights are being violated or if they see unsafe practices on the bus.

All buses are outfitted with a phone number to dial to report issues. Already, Jeke said after the accident, NTA had seen an increase in reporting of dangerous behaviors on the buses.

In all of 2014, the authority experienced 30 reported accidents and incidents, of which only two resulted in deaths. One included a passenger jumping from the bus, resulting in the passengerâ€™s death.

In addition to accident records, The Bush Chicken also requested the safety manuals that the NTA provides to drivers. The Bush Chicken asked two transportation experts to review the manuals, including Alexander Haywood, a Safety and Training Instructor at the Washington Metropolitan Area Transit Authority in Washington, DC, also known as WMATA. He concluded that the documents were inadequate for a transit agency.

Haywood, whose main function is to â€œmake sure present operators and new operators know how to operate the buses safely in any condition,â€ said he expected the manual to contain a lot more information specific to operating a transit vehicle.

â€œIâ€™m sure the manual is more than that,â€ he said, before explaining that at WMATA, operators are required not only to obey all regular traffic rules but also specific rules such as only operating in the curb lane at all times.

Most operators at WMATA have not had an education higher than high school. In fact, the only educational requirement is a high school equivalency test, known as a GED. Even so, Haywood said it does not stop his operators from being able to grasp safety concepts because they are immersed in a training program that lasts nine weeks before servicing customers. After their initial training, Haywoodâ€™s safety department retrains operators periodically.

He said Liberiaâ€™s lower literacy rate should not impact the NTAâ€™s ability to have operators who can adhere to more detailed guidelines because safely operating vehicles requires hands-on experience as much as it requires being â€œbooksmart.â€

Another urban transportation systems expert, Efon Epanty, expressed similar sentiments that NTA needed to develop better safety standards. In an email response, he said, â€œBasically, based on the information on the attached document, [NTA] does not have any safety standards. They may have to develop one.â€