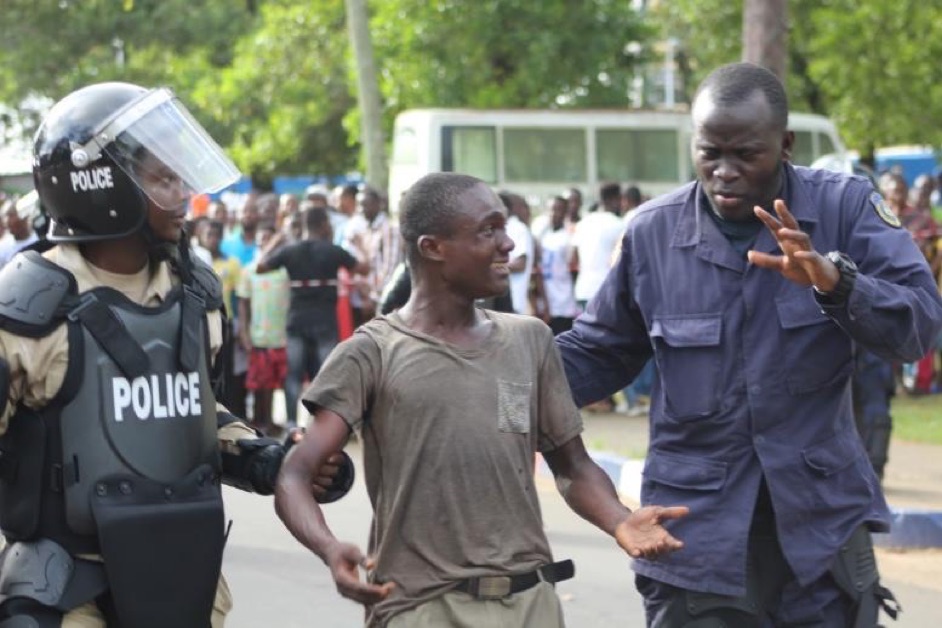 MONROVIA, Montserrado â€“ The Council of Patriots, the organizer of the anti-government protest held on Monday, January 6, is demanding the dismissal of the inspector general of the Liberia National Police, Patrick Sudue, for the use of excessive force by police officers to disperse peaceful protesters.

Officers had used tear gas, water hoses, and other non-lethal measures to disrupt thousands of protesters who converged on Capitol Hill, the seat of the three branches of government, to peacefully voice their grievances and demand redress to a petition previously issued during a previous protest on June 7, last year.

On Wednesday, the Independent National Commission on Human Rights and the Civil Society Human Rights Advocacy Platform in Liberia issued a joint statement calling for the government to investigate why police used excessive force against peaceful protesters.

The statement affirmed the citizensâ€™ rights to peacefully assemble under Article 17 of the constitution and other international charters Liberia has signed on to. The groups said their monitors observed that security officers headed by deputy police inspector general Marvin Sackor, without a prior warning, ordered the use of water cannon and tear gas against protesters and bystanders to disperse them.

â€œThe excessive use of force by the LNP against the protesters who had been peaceful all day on Monday, January 6 was totally disproportionate and unwarranted,â€ the statement read.

â€œEfforts by the INCHR and the CSO Human Rights Platform leaderships to dissuade the action police action was ignored by 102 [Deputy Police Inspector General Sackor] because he claimed he had received [an] order from above to totally disperse the crowd of protesters.â€

The two institutions also demanded an explanation form the government on the presence of an unmarked vehicle occupied by ex-rebel generals Ofori Diah, Siafa Norman, and Augustine Nagbe, alias General Power. The said those ex-rebel leaders and four others passed security checkpoints without inspection and entered the assembly ground, a no-go area for unauthorized vehicles.

In a press conference on Thursday, Henry Costa, who chairs the Council of Patriots, called for Inspector General Sudue to be relieved of his post as punishment for the action of the police officers.

â€œExcessive force was unnecessary and it was unprovoked, and people must be punished for that. Liberian citizens were hurt and somebody must pay the consequences,â€ Costa said.

â€œTherefore, the COP demands that the Inspector General of Police, Col. Patrick Sudue, be relieved of his position, as a punishment for attacking unarmed, peaceful protesters.â€

Costa recounted that former President Ellen Johnson Sirleaf had taken a similar path in 2011 and dismissed Marc Amblard as head of the police following a riot between police officers and members of Weahâ€™s Congress for Democratic Change, which left at least one dead and several others wounded.

Costa said several protesters were injured as a result of the police action on January 6.

Additionally, he added that the Council of Patriots was also pursuing the â€œridiculousâ€ allegation that one of its officials, Rep. Yekeh Kolubah of Montserradoâ€™s tenth district, carried a firearm in his car on the day of the protest.

Costa promised to ensure that Rep. Kolubah remains a free man because he is innocent of the allegation levied against him by the police. He also said his group had secured the release of its members who were arrested by the police during Mondayâ€™s protest.

Costa said the Council of Patriots would not announce any new protest, and would, instead, give the government time to address their demands.

â€œWhen we believe that weâ€™ve given him enough time and he has failed to live up to that, the COP will then go back in-house and review its position and announce the next course of action,â€ he added.

â€œBut we demand that the next time we come out to protest, we want to ensure that we will be ensured the guarantee that there is security, and we as Liberian citizens do not feel comfortable with the inspector general of police.â€