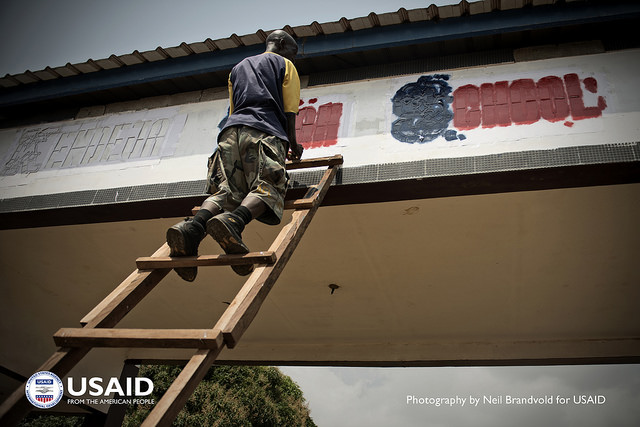 PAYNESVILLE, Montserrado â€“ Several parents are protesting the refusal of authorities of the Kendeja Public School, located on the Robertsfield Highway, to enroll their children.

The parents are gathering at the entrance of the school and demanding their childrenâ€™s inclusion.

Some of them who spoke to The Bush Chicken said despite several weeks of pleading with the school to reconsider its decision, the administration continues to resist.

The parents said the schoolâ€™s administrators told them that Bridge International Academies, a private organization, had taken over the schoolâ€™s operations and had new enrollment criteria, including a requirement that every student sit and pass an entrance exam before being enrolled.

Some of the parents said although their children had passed the exam, the school required them to sit for a second exam. After the last exam, the parents said the administration again informed them about its decision to limit enrollment to 45 students in a class.

They said the school has also restricted its operations to one session, instead of the practice of running morning and afternoon classes. The parents expressed concern that this action would cause more than 300 students to drop out of the school this year.

â€œWe were informed in an earlier meeting that Bridge is working in partnership with the Ministry of Education,â€ Martha Johnson, one of the parents said.

Johnson said school authorities would now accept up to 55 students in a class and not the original limit of 45.

She said while they welcomed the new partnership, it is a setback to families who face financial difficulties.

â€œAlmost one month, we have been here in the rain and the sun, talking with the authorities here to let our children in the school,â€ said another parent, Lisa Phillips. She said the school administrators were not budging and called on education authorities to find amicable solutions to the problem.

Mulbah said those making such claims are misleading the public. â€œWhat is happening is that the number of junior high students this semester is overwhelming for the number of classrooms we have,â€ he said. He said the school operates in a six-classroom building.

He said he is only following the governmentâ€™s policy by limiting classes to 45 students although he said due to sympathy for the students and their parents, his school had increased the number to 55. â€œAllowing anything other than that number would put me against the Ministry of Educationâ€™s policy,â€ he said.

He said the school has now reached capacity and urged parents to take their children to other schools.

Authorities at the Ministry of Education are yet to comment on the situation at Kendeja Public School. MOE Communication Director, Maxim Bleetahn told The Bush Chicken in a phone conversation that he would reserve his comments on the issue.

Kendeja Public School is being operated by Bridge, along with 23 other schools, as part of the governmentâ€™s Partnership Schools for Liberia initiative. Seven other operators are participating in the program which will have them operate 94 public schools across 13 counties.