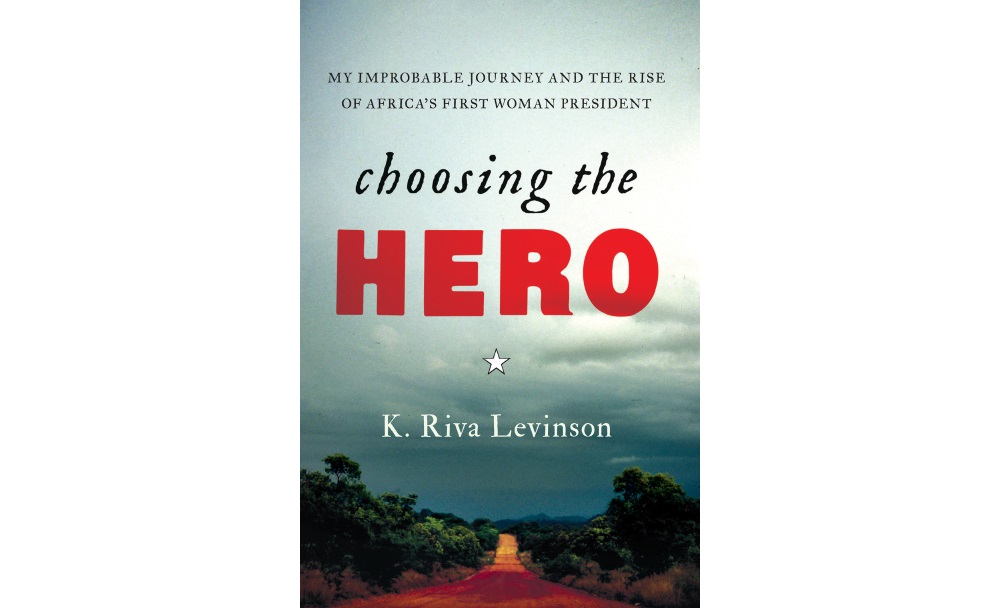 I approached the release of Choosing the Hero, a book by President Ellen Johnson Sirleafâ€™s Chief Lobbyist, K. Riva Levinson, with some skepticism.Â  Works by politicians and those close to them are in my view, rarely insightful.Â  My trepidation only strengthened after I read an excessively fawning review of the book by Washington insider Todd Moss (recipient of a shout-out in the bookâ€™s acknowledgments), who dubbed Levinson â€˜a good lobbyist.â€™

Nonetheless, I remained eager to read the book, which continues the trend started by the president herself of publishing biographies in the midst of service to Liberia.Â  I reached out to Levinson, thinking that I could leverage my status as a Liberian-based writer to appeal to her marketing instincts and secure a copy of the book to review.

Levinson was wise to my efforts (and perhaps my skepticism), and I eventually procured the book independently. I commend Levinson for making the book available in Monrovia and despite some shortcomings, I was pleasantly surprised that the work, which takes the reader to Somalia, Angola, and Iraq and Liberia is quite candid.

The book is particularly strong in discussing Ms. Levinsonâ€™s early career as a lobbyist, working under Paul Manafort â€“ who is now running US Presidential candidate Donald Trumpâ€™s political campaign.Â  It is evident that she has no love for the political strategist, who sent her to Mogadishu, risking her death, â€œsimply because he could.â€

Levinson speaks of her unfulfilling work lobbying for a number of notorious human rights abusers, such as Somaliaâ€™s Siad Barre and Equatorial Guineaâ€™s Teodoro Obiang, one of the worldâ€™s longest-serving leaders.Â  Disappointingly, however, the brief passage on Angola where she lobbied for the rebel Jonas Savimbi, speaks more to violence conducted by the ruling party than the role that the aid drummed up by her firm may have played in continuing Savimbiâ€™s brutal war.

Fellow lobbyists are not Levinsonâ€™s only targets.Â  Predictably, Charles Taylor comes in as the object of significant wrath â€“ even in areas that seem unfair â€“ Levinson holds him responsible for Samuel Doeâ€™s execution.Â  More intriguingly, Susan Rice, currently Obamaâ€™s National Security Advisor, is identified as an obstructionist to Levinsonâ€™s efforts.Â  Levinson also discloses that the White House was displeased that Sirleaf skipped the historic 2014 summit of African leaders to deal with the Ebola crisis.

Some of Levinsonâ€™s criticisms read more like cheap shots â€“ particularly references to Prue Clarke, which, while not direct jabs, donâ€™t put her in the most flattering light.Â  Clarke is the co-founder of New Narratives, a media initiative which closely collaborates with Front Page Africa, a Liberian daily that has had several run-ins with the Sirleaf government, one leading to the imprisonment of its publisher.Â  Rather ironically, Levinson also dubs George Weah, more than a quarter century younger than Sirleaf, â€œan aging soccer star.â€

A section on Sirleafâ€™s failed run against Charles Taylor in 1997, when Levinson and Sirleaf first teamed up, presents the most interesting treatment of Liberia in the book. Although unsurprisingly, some of this information is contested.

I asked Byron Tarr, a co-founder of the Liberia Action Party about Levinsonâ€™s claim that LAP had promised Sirleaf their Presidential nomination before withdrawing it at the last moment after she had traveled from the US to Liberia.Â  Tarrâ€™s recount of the events tell a slightly different tale, noting that LAP offered her the ticket but, â€œshe wasnâ€™t sure so we then chose [Cletus] Wotorson,â€ with Sirleaf only demanding this decision be rescinded after she returned to Liberia during the LAP convention.

Lamentably, there is little material on Levinsonâ€™s decision to start her own firm, KRL International in 2007, and her representation of Sirleaf following her election.Â  A notable exception is an analysis of the response to the Ebola crisis, which reads as something of a hasty add-on to the work and would have been better served as a teaser article for the book.

While the book doesnâ€™t address a number of pressing questions in detail, Levinson, unlike most authors, at least touches on many subjects of interest, including Sirleafâ€™s early support of Taylor and the regional mediation role of Blaise Compaore.Â  Intriguingly, she notes that George Soros, whose wealth resulted in the founding of the Open Society Initiative for West Africa, provided a grant to the International Republican Institute to host a meeting of both the armed and political opposition to Charles Taylor in Ouagadougou in July 2002.

In the context of countless political memoirs that do little to illuminate anything new to the reader, Choosing the Hero stands out for a number of interesting anecdotes and the relative candor of its author.

However, I cannot say that it changed my mind about the general utility of the lobbying world.Â  Describing her trip to Mogadishu, Levinson recounts her fervent prayers that a fixer would show at the airport.Â  He does not and in his absence, Levinson and a colleague have to dispense bribes to medical officials and baggage attendants.

After reading the book, I canâ€™t understand why governments think it might be helpful to give millions of dollars to firms whose personnel get anxious at the prospect of traversing their airports without external assistance.