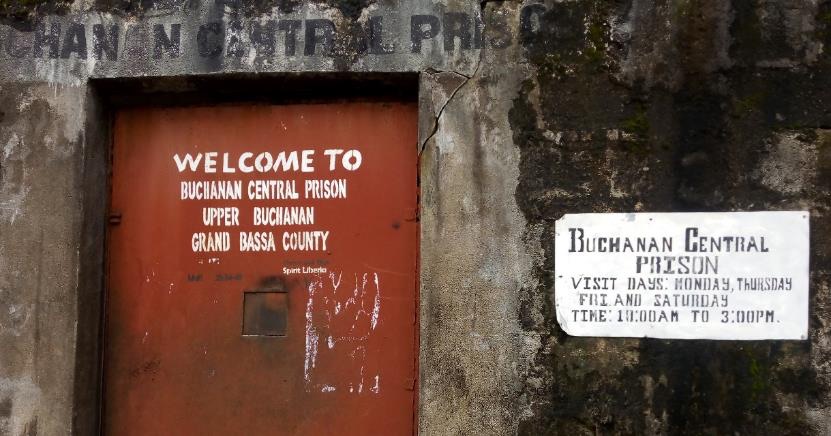 BUCHANAN, Grand Bassa – The Bush Chicken has confirmed the indefinite suspension of the superintendent of the Buchanan Prison Compound, Victor Logan, due to several irregularities at the prison.

According to a Justice Ministry source who spoke anonymously because the information was not yet authorized to be released, the suspension of the prison superintendent was ordered by the Ministry of Justice, through its Bureau of Corrections and Rehabilitation. Tom Kamala, from Monrovia, has apparently been appointed the new prison commander.

“I can’t say anything further, but I understand there are so many issues at the prison compound that the new commander needs to address properly,” the source said.

Kamala will lead the prison command during Logan’s suspension and investigation. Logan’s suspension appears to have been related to his reported ordering of the flogging of a 30-year-old inmate and resident of Buchanan, Esther Ben, in addition to the illegal release of a local businessman, Charles A. Edward, from the prison.

The source said Ben was involved in a fight with her fiancée, for which she was charged with aggravated assault, and remanded to the central prison by the Buchanan Magisterial Court. Upon visiting Ben at the prison on the following day, her family found her helpless and bleeding, with severe bruises.

When asked, the victim informed her family she was flogged by two female correction officers on the order of the prison superintendent, Logan, who, according to Ben, accused her of insulting him.

Ben was then rushed to the nearby Catholic Hospital in Buchanan, where she spent more than a week receiving medical treatment.

Bishop Mongai Grigsby, who heads the Light House Tabernacle of Praise Church, spoke to journalists of the shock many residents felt upon learning of Ben’s treatment in the prison.

“Surprisingly this morning, when they brought her, she was flogged by order of the prison superintendent Logan, they just called him, and he said the girl insulted him. But my question to him is that if the girl insulted him, is it the way to go to order two ladies to flog her?” Grisby said when speaking to journalists about the incident.

If true, it is unclear how a simple verbal insult led to such a severe beating of Ben. To the surprise of many, including the family, Logan has not denied ordering Ben’s flogging. Instead, he insists she insulted him at the prison.

Grigsby also told journalists that Logan has pleaded with the family and paid L$20,150 (US$195) in medical bills at the hospital following Ben’s discharge.

Despite several attempts, Logan, however, has refused to speak to journalists on the matter.

It is unclear whether the husband of Ben will pursue legal actions against Logan in consideration of his admission of responsibility and having paid the victim’s medical expenses. It is also not clear whether the family is pleased with Logan’s current indefinite suspension and prosecution.

For his part, the local businessman, Edward, who was remanded to prison by the Second Judicial Circuit Court but released by Logan, was again arrested on further charges of unlicensed and illegal possession and distribution of narcotics. Police said Edward was in possession of an estimated 414 grams of cocaine worth US$16,544, and 58.8 grams of heroin worth US$2,058.

He was forwarded to the Buchanan Magisterial Court before later being transferred to the Second Judicial Circuit Court for trial.

While a property valuation bond was filed on Edward’s behalf by a couple, Anthony Kumeh and Alice Kumeh, on Nov. 13, 2018, Judge Joe S. Barkon, who presides over the case, was frustrated that Edward failed to appear in court on Monday, June 3 when his trial was scheduled to be heard. Barkon’s frustration was also directed at the Kumehs, who filed Edward’s bond, but who also failed to provide any formal notice explaining their and the defendant’s absence from court.

Earlier this year in May, Edward escaped from Buchanan while the trial was ongoing, and an arrest order was issued by the circuit court. He managed to evade police by avoiding public areas and his residence in Buchanan. His last arrest came, however, by officers of the Drugs Enforcement Agency on Merchlin Street, Monrovia, where officers found him in possession of 12 tubes of heroin worth L$1,336,000 (US$6,362).

As if there is no end to Edward’s marathon jailbreaks, he was again released from prison in Buchanan by on-duty officers and has since disappeared. Logan claimed he was off duty at the time, and therefore cannot account for Edward’s disappearance or whereabouts.

Shift Commander William Toe and two correctional officers have been arrested and sent for the prosecution at the Buchanan Magisterial Court in connection to Edward’s latest escape.

The three officers appeared in court for the first time on Tuesday, Nov. 19.