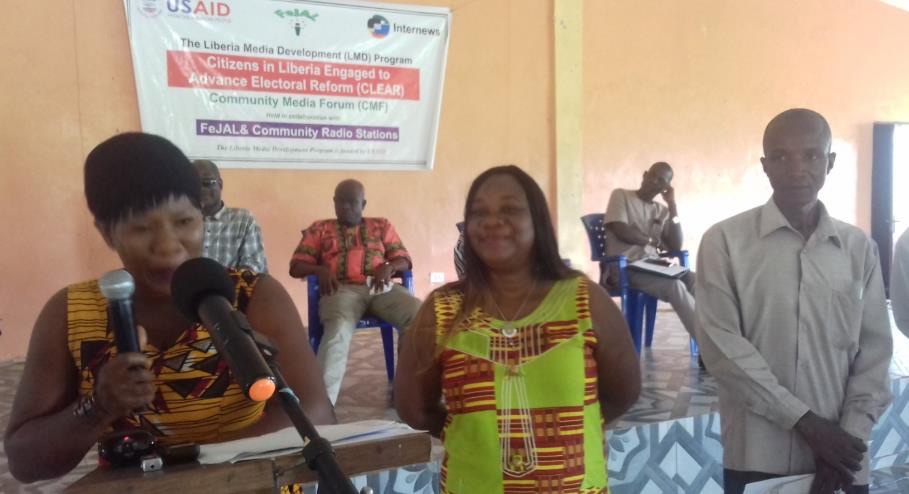 HARBEL, Margibi â€“ Citizens residing across Margibi have expressed frustration over the limitation of laws on the election of public officials and are calling for reform.

Speaking at two separate community media forums held in Kakata and Cotton Tree, most participants agreed that most election laws favor elected public officials and are not in the interest of the voters. The forums were funded by USAID through the implementer of the Liberia Media Development Program, Internews.

The citizensâ€™ suggestions were tailored around provisions affecting the tenure of elected public officials and representation of minority groups, such as women and people with disabilities.

Vera Houston, a resident of Unification City who attended the community media forum in Cotton Tree, called for a reduction in the tenure of the president from six to four years.

â€œWhen this is done, presidents who do not perform well will not have to stay long in power at the detriment and suffering of the people who elected them,â€ Houston said.

She said a president who served well at the satisfaction of the citizens, however, can be re-elected after the first four-year term. She hopes that her recommendation will be included in a proposal for a referendum to change the current law prior to the special senatorial election next year.

Another citizen, Mark Nuah, also suggested that the call for a number of seats in the legislature to be allotted exclusively for women be critically examined.

â€œWhile it is true we welcome womenâ€™s participation in government, women should avail themselves and play key roles in political issues,â€ Nuah said.

Amid the advocacy by many feminist organizations for dedicated seats for women in the legislature, he said the current law does not have such provisions.

The elections law provides that political parties and coalitions submitting candidates for an election should â€œendeavorâ€ to ensure that there is no less than 30 percent of candidates from each gender. That vague language has made the law difficult to enforce, and no political party met the gender requirement during the 2017 general elections.

Except for the Elections Coordination Committee or ECC, all the organizations that observed the 2017 elections recognized the need for a change in the elections law to ensure that women had better representation.

The observers called on the legislature to strengthen the language of the elections law to ensure that there was more representation for women.

However, Nuah said the lack of women candidates is also denting their chances of making much impact in government.

â€œWomen always sit on the back seat. Now is the time they prepare themselves and take up the challenge,â€ he added.

Gondor Musa, the head of a civil society group, agreed that while it was unnecessary to dedicate legislative seats exclusively for women, women must muster the courage to participate in public elections along with their male counterparts.

Also participating during the forums as a panelist was the assistant elections magistrate for Margibi, Foulton Yancy, who said holding elections on the current date provided in the constitution can be a challenge for the National Elections Commission due to flooding and inaccessibility caused by a downpour of rains.

â€œIn the most recent elections in Margibi County, some voters were compelled to vote the next day due to continuous rain. This alone stressed the commission a lot,â€ Yancy said.

For his part, the coordinator of the disabled community in Margibi, Augustine Gbennie recommended that there be a law to have a number of seats reserved in the legislature for people living with disabilities.

â€œPeople with disabilities should represent their own people,â€ Gbennie said. â€œMost of the people in elected positions do not feel the pain and discrimination we undergo daily. A voice of our own is seriously needed at the legislature.â€