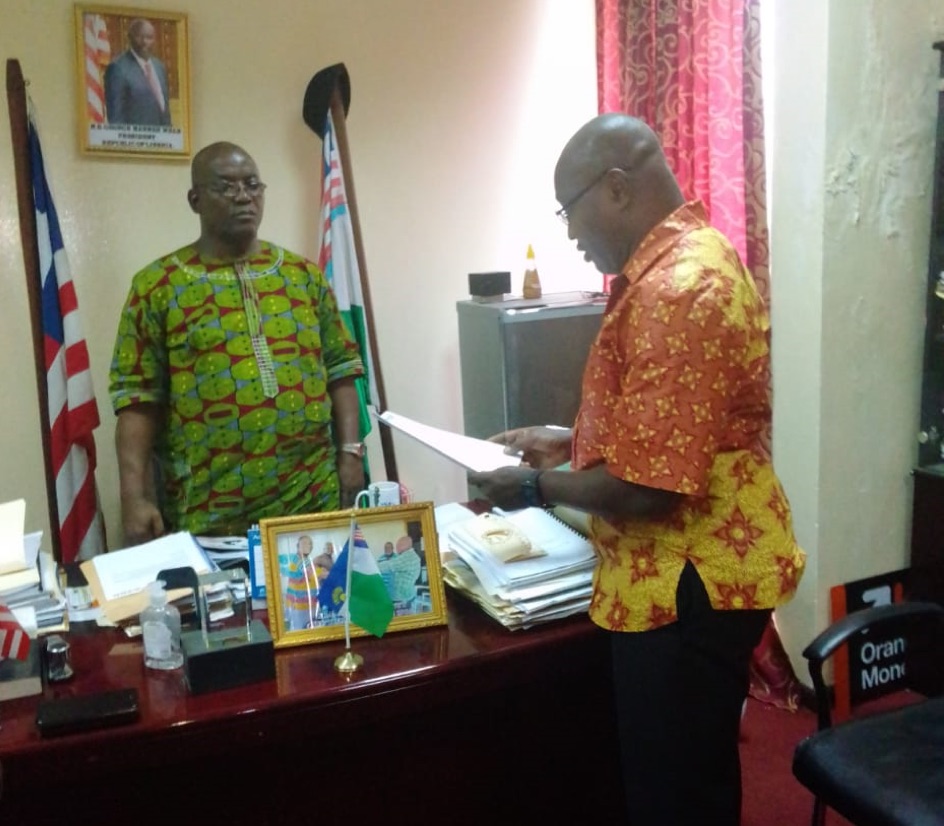 The ECC is a consortium of civil society organizations working on the elections in Liberia. The group deployed the highest number of local short and long term observers, during the 2017 general elections.

Its acting chair, Malcolm Joseph, led a delegation of other Civil Society Organization partners to present the amendments contained in the ECCâ€™s recommendations.

Despite reports of isolated cases of electoral fraud, both the first and second round of the 2017 general and presidential elections were generally certified as calm and orderly by the National Elections Commission and international observer missions, although the December 26 runoff election was marked by significant improvements.

However, the elections exposed weak points in Liberiaâ€™s electoral system. For one, a prolonged legal battle after the first round of elections created fears that there would not be enough time to hold a runoff election and inaugurate the new president within the timeframe required by the constitution.

Liberty Partyâ€™s Charles Brumskine case against the National Elections Commission did not only prompt a need to reconsider the constitutional timeline for elections. It also drew attention to the data within NECâ€™s voter roll, which contained duplicate data and other symptoms of a database that had not been subjected to rigorous data quality requirements.

Joseph, the ECCâ€™s acting chair, recalled that the process to put forth recommendations begun in the aftermath of the 2017 elections when certain anomalies within the New Elections Law and the 1986 Constitution were noticed.

According to an ECCâ€™s release, the presentation of the reform proposals to the legislature represents a critical milestone in the electoral reform process. The committee said, from the seventeen amendment recommendations it presented, nine propositions are directed at the New Elections Law, six at the 1986 constitution, one targets the Code of Conduct on political participation, and one aims at the guidelines on registration of political parties and independent candidates.

The ECC also disclosed that the recommendations provided a case-by-case rationale for each of the amendment proposition it submitted. It includes the proposed amendment to chapter 2 subsection 2.1 on the need to amend the National Elections Commission as an autonomous body to be under the direction and management of seven commissioners appointed by the president of whom three shall be either sex and no two of them shall be from the same county, with a shortlist derived from a process of public vetting.

The ECC recommended that the process shall be managed by an ad-hoc committee of seven persons â€“ one nominee each from civil society working on elections, religious institutions, women group, the Liberia National Bar Association, the Governance Commission, the Press Union of Liberia, and the private sector.

â€œThese nominees shall be appointed by the chief justice, with one of them serving as chair,â€ it said.

â€œThe committee shall submit nine names of successful candidates for onward submission to the president, who shall appoint commissioners with one of them, chairperson, and another as vice-chairperson. All of the appointees shall be subject to the consent of the senate.â€

Another amendment recommended by the ECC is in Article 45 and Article 48 of the constitution, which provides for senators and representatives to be elected for six and nine years, respectively.

The new recommended terms are for representatives and senators be elected for five and seven years, respectively.

Recently, President George Weah presented a list of eight propositions, along with other legislation, to be approved for amendment in a referendum. Also, among them is a proposal to reduce the tenure of elected officials, such as president, senators, and representatives.

Grand Gedehâ€™s third district representative, Alex Grant, who also heads the House Committee on Elections and Inaugurations, received the ECCâ€™s propositions on behalf of his committee and the House of Representatives on August 27.

Grant thanked the ECC and pledged the full commitment of the National Legislature to amicably address electoral reform issues submitted to them. He acknowledged that the ECC electoral reform process has a foundation in the constitution, as it is the right of the people to petition their lawmakers on important national issues.

He termed the ECC electoral reform initiative as significant in helping to improve the countryâ€™s democracy. He also promised that the propositions would be given due considerations by members of the legislature.

In November 2018, the Grand Gedeh lawmaker promised that the House of Representatives would complete the process of reform in the countryâ€™s election laws in six months.

Sinoeâ€™s senator and chair of the Senate Committee on Public Autonomous Agency and Commissions, Milton Teahjay, has promised the Senateâ€™s collaboration with the Lower House to make changes on prepositions recommended to ensure an improved electoral system.

Teahjay said the commitment expressed by the Chair of the House Committee on Elections and Inaugurations was in place and reflects both the view of the Senate and House of Representatives. He urged the ECC to be its engagement with the legislature.

This article was produced with funding from Internews for the Citizens in Liberia Engaged to Advance Electoral Reform (CLEAR) project. Gbatemah Senah contributed to this article.