VAI TOWN, Montserrado – An early morning fire gutted the Vamuco Market Shopping Center warehouse in Vai Town on March 15. Although a significant amount of properties were damaged, there were no deaths.

The Bushrod Island market is estimated to serve over 200 vendors. On the morning of the fire, Eric Wesseh, the manager for the market, told The Bush Chicken that the fire had destroyed goods and properties worth over US$2 million.

Although there was still no information about how the fire started, Wesseh said the Liberia National Fire Service had promised to make its findings public once the investigation was complete.

Wesseh recalled that at approximately 1 a.m., he received a call from a security guard assigned at the facility that the building was on fire. He and others then tried to call firefighters to come and rescue the facility.

The Fire Service failed to quench the flames and save the goods and properties in the warehouse, Wesseh said. However, they prevented the fire from spreading across Vai Town, a densely populated community. He added that the fire damaged a portion of a children’s playground attached to the warehouse.

Wesseh is now contemplating how to deal with all the vendors who store their goods in the warehouse.  He called on them to remain calm ahead of a planned meeting.

“We are not even able to pay for what our customers have lost, but we [are] trusting God that the government will come to help us, as management, to handle this situation, especially the office of the president,” he added.

One of the vendors at the market was John Henry, a Nigerian national who said he had lost all he had worked for over the past 10 years he had been in Liberia.

“It is my money – I suffered to reach where I am, but I cannot kill myself,” he added. “The same God that brought me this far will touch the hearts of people to come to our rescue. The management here has been very good to us, and they too have lost.”

Henry appealed to the government and humanitarians to help them restart their businesses.

Another vendor, Victoria William, said she had been selling at the market for 20 years. A widow with four children, William fears that her children will have to drop out of school, and she will be unable to feed them or pay her rent.

“I do know not the total amount of money I have lost,” she said when prompted to assess her loss. She had just brought in 25 bags of used clothing.

“We hope that our President George Weah will do something to help us start our business. He is not the one that burned our warehouse, but as president and father for the nation, I am appealing on behalf of us to his good office to make sure we get back in business.” 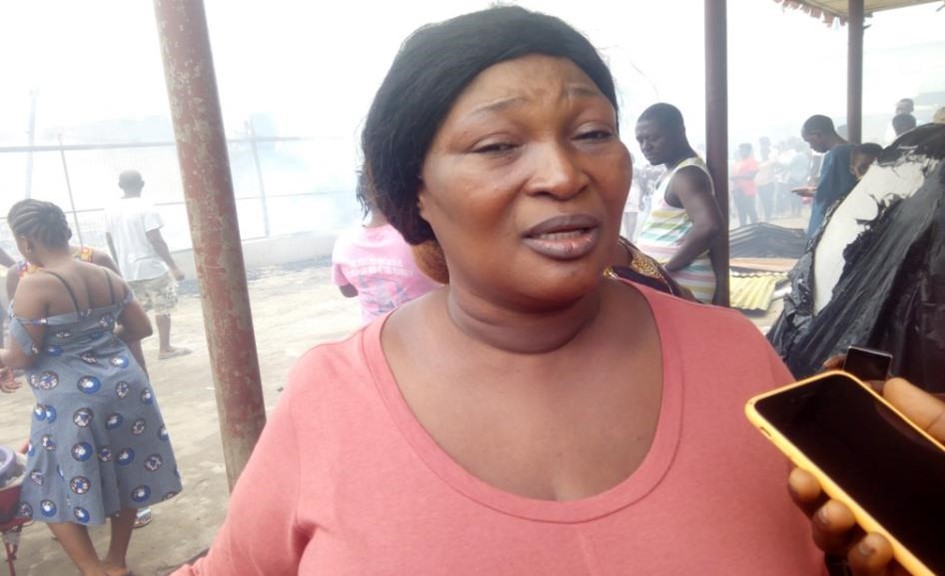 Victoria William, a used clothes vendor whose goods were destroyed in the fire. Photo: George Momo

While the Fire Service investigation is still in progress, a security guard on the scene, Harris Flomo, said he believes the fire resulted from an electrical shock.

The market is owned and operated by Rep. Abraham V. Corneh of Montserrado’s 14th district. It was built to provide better seating and storage facilities to vendors. Although Corneh did not give an interview, he was on the scene of the incident on Monday morning.