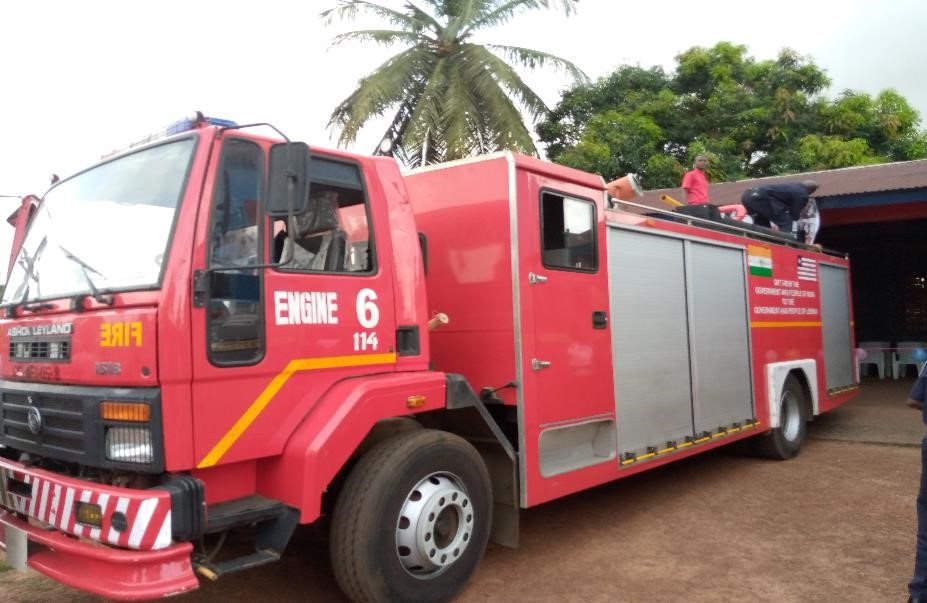 BUCHANAN, Grand Bassa – The Grand Bassa detachment of the Liberia National Fire Service has received a new fire truck from the government of Liberia.

The presentation of the truck also marked the reopening of the Buchanan fire station after it had been dormant for a long period.

Alex Dickson, the director of the LNFS, visited Buchanan on November 25 during the ceremony to turn over the truck to Grand Bassa. Dickson thanked President George Weah and the Indian government for ensuring that Grand Bassa could receive firefighting equipment such as the truck.

The truck provided to Grand Bassa is one of five new fire trucks recently donated by the Indian government, Dickson said.

“This is history because the Liberia National Fire Service was established since 1948 and this is the first time in the history of Liberia over 50 and some more years for Liberia to own five new fire trucks,” he said.

“This history that has been made in this regime tells us that some people have an interest for certain things. Fire is our best friend, but fire is our worst enemy.”

Dickson said a month ago, a team from the Fire Service had assessed the state of fire stations across the country, including in Grand Bassa.

“From our statistics, the death rate in Grand Bassa County came second from fire outbreaks,” he said. “So, we said let’s pay attention to Grand Bassa because of the development and also the roads are accessible. So, we thought it wise to come back and not just come back empty-handed, but we came back with a brand new fire engine.”

He promised that the Fire Service would supply the Grand Bassa station with three months of fuel needed to operate the new truck.

“Beyond three months, the county authorities that represent the government will start to work along with the fire service department; because I am trying to bring in a system that everything will not come from the capital city,” he added.

He explained that the Fire Service would work extensively to ensure that employees in Grand Bassa were properly trained.

Grand Bassa’s assistant superintendent for development, Flee Glay, thanked the government for the initiative. He admitted that fire disasters had been increasing in Grand Bassa, and said the truck would help reduce the impact of fires in the county.

“We can assure you that we will work closely with the fire detachment to making sure that this kind gesture will be used for its intended purpose,” Glay added. “Even though we are not praying for any fire disaster, but while it is day, you have to prepare for the night hour just in case there is a fire so we can fight it.”

The head of the Grand Bassa fire detachment, Col. Samuel Weah, also promised to use the new vehicle effectively. He added that over the years, his station has been out of a functional truck, making Grand Bassa residents vulnerable to fire disasters. He also appealed to the government to provide training to ensure that his employees can carry out their work.