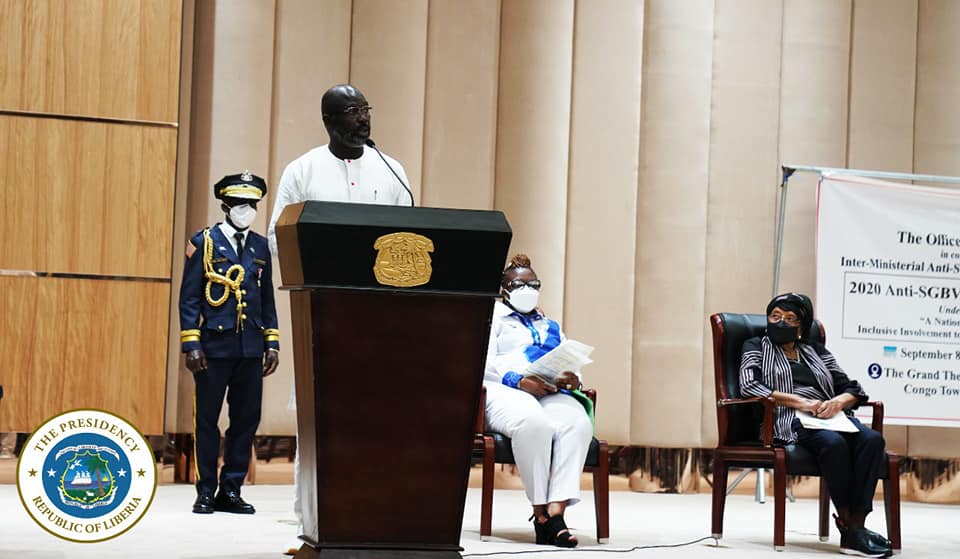 MONROVIA, Montserrado – The Liberian government has begun a planned national conference on rapes and other sexual and gender-based crimes.

The conference, organized by an inter-ministerial committee, comes after several days of protest about the high number of rapes in the country. Hundreds of Liberians had gathered in the streets of Monrovia for three days of protests against rapes. The anti-rape campaigners have embraced the president’s recent efforts in addressing the issue.

The conference is a part of the Anti-SGBV Roadmap drafted by the inter-ministerial committee that was set up by President George Weah.

After the conference was called to order by Pres. Weah, former president Sirleaf addressed the conference, reminding the audience that Liberia is going through two crises – the Coronavirus pandemic and a rape epidemic.

While COVID-19 is receiving a sufficient amount of national attention which she commended the president for, Sirleaf suggested that the rape epidemic also requires similar attention from the government.

“Mr. President, women have been protesting for a while now, and some tend to misinterpret their intention,” she said.

“Some have tried to claim that this is the intention of narrow political motivations to tarnish the image of the country. Mr. President, these women have protested because they have felt the pain, and their intentions were safely meant to bring attention to the problem when they felt they had no one doing so. I had the opportunity to meet with some of them; they spoke about the violence they have experienced personally, witnessed, or heard. I believed you will be hearing from many of them in these next two days as they offer strong calls for recommendations.”

The former president expressed a hope that the conference would close “with a strong consensus and commitment to tackle and implement all regulations.” She further challenged all those present that it was their duty and obligation to address SGBV.

“We all ask you to join this cause to ensure that rape can be addressed and we can see that the lives of future generations of our young girls and women can live peacefully and reach their potentials,” she said.

The Senate’s president pro temp, Albert Chie, also spoke, where he condemned rape and said the Senate was “prepared to listen and act.” He expressed the Senate’s willingness to make amendments to rape laws but emphasized that laws alone cannot solve or minimize rape crises – all branches of the government must be involved, in addition to the private sector and civil society organizations.

He also committed the Senate to ensuring that there were appropriations within the national budget to fight rape and sexual violence.

Another senior lawmaker, the speaker of the House of Representatives, also spoke at the conference. Rep. Bhofal Chambers called for the country’s partners and CSOs to provide input and recommendations to the roadmap that had been crafted.

First Lady Clar Weah was also present, and she said it was sickening to hear that children as young as 10 were being raped.

“All sexual and gender-based violence is inhumane and unacceptable. I condemn rape and remain firm in my commitment that the rights of women, girls and children are protected,” she said.

“There have been outcries on the penalties for perpetrators or would-be perpetrators. The Anti-SGBV Roadmap 2020-2022 has given clearer directions. However, I strongly believe our concentration should focus more on prevention rather than punishment because of the physical, emotional, and psychological impacts SGBV has on its victim.”

The first lady said while DNA testing machines and safe houses for victims are useful, the permanence of scars from SGBV means more effort should be placed on preventing those crimes from occurring.

“We must educate our men and boys in schools, churches, mosques, and our communities against SGBV,” she said. “Let us speak out and not be silent; prosecute the perpetrators and not shield them. We must protect the victims and refuse to compromise with people who are committing these atrocities.”

The roadmap highlights challenges in the fight against SGBV, such as the inability of the legal system to prosecute perpetrators, insufficient protection measures for witnesses and survivors, and the tendency of the justice system and community members to compromise cases.

It also stressed on the limited access to medical and psychosocial services especially within the immediate 72 hours after the crimes occur. The limited access is often due to logistical and cost-related issues, the lack of equipment in forensic labs, and inadequate logistical support to establish definitive proof of a crime.

Low budgetary support to conduct outreach and awareness, and a limited support system to identify, report, and address sexual abuse and exploitation were also identified as challenges in the roadmap.

After all the remarks by key speakers, four groups were set up for plenary discussions:

Reports from the various groups will be presented on the second and last day of the conference. The budget proposed for the implementation of the roadmap is US$6 million.