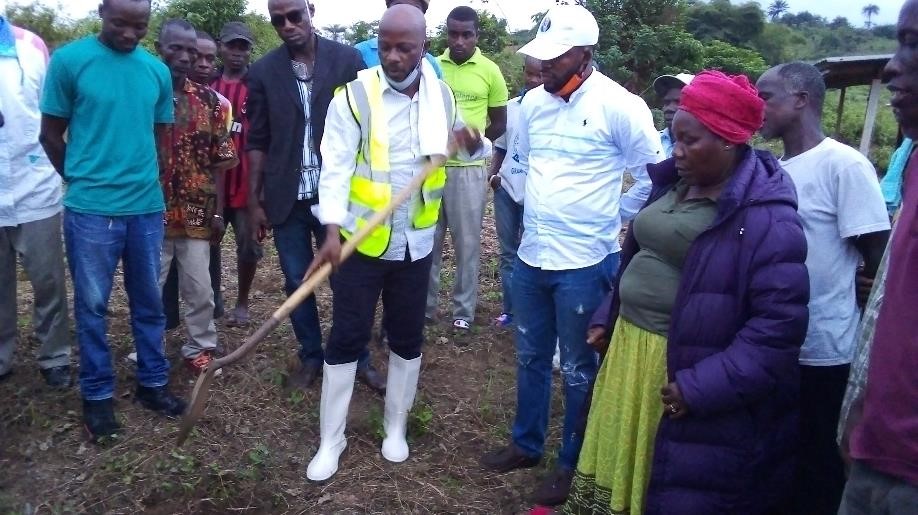 The palava hut will now allow the town of over 5,000 to have a meeting space for programs it holds. Currently, major programs in the community are held in an unsheltered space in front of a school, even as these programs have hosted major guests such as ministers, lawmakers, and the president.

At the July 11 groundbreaking ceremony, Baikpeh said gone are the days when the people of the district would sit in the open to discuss pertinent issues. Baikpeh, who also hails from the district, adding, “It is time for the citizens to benefit from their government.”

“We are going to construct a modern palava hut to change the story and it will be the biggest palava hut ever,” he said.

Although he did not give the cost of the project, Baikpeh said the construction would require 10 bundles of metal roofing sheets and several bags of cement. He noted that Foreign Minister Gbehzohngar Findley is one of the sponsors of the project, which Baikpeh says he is constructing out of his own pocket.

The superintendent ran for the district seat against incumbent Rep. Mary Karwor in 2017. Karwor’s seat will not be available until 2023, when her current term ends, but in 2018, Baikpeh also constructed a sheltered market building in the same community.

“We came here and saw our sisters and mothers selling under the rain, so we built a market with modern tables and presented it to them,” Baikpeh explained the rationale for the market building.

“Today, we are here again to break ground for a palava hut. Trust me, we will build it for you. If we can build a market, then we can build this palava hut with all of our efforts.”

Also present at the program was Grand Bassa’s fiscal superintendent, Daniel Willie, who pledged five bags of cement and two bundles of metal roofing sheets for the project.

Baikpeh has been steadily contributing to projects in the district, including the construction of mini-bridges and rehabilitation of feeder roads.

Sharing
Tags Janjay Baikpeh
Contributions to The Bush Chicken are not tax deductible.