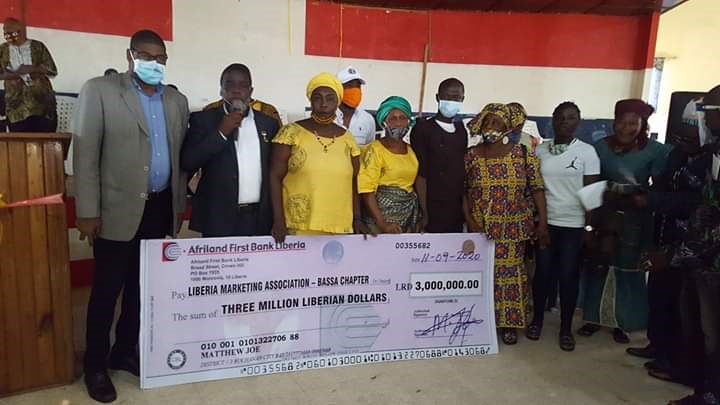 Speaking at a program this past weekend where the check was presented, the lone Coalition for Democratic Change lawmaker in Grand Bassa said he was working to improve the livelihood of residents of his district and to fulfill campaign promises he had made.

“During the campaign, when I said I [would] pave the Fairground road, buy a bus for students in my district, establish the [District Development Council] and give L$3 million to marketeers in my district, other people said these things were not possible,” he said.

“Some politicians said it was a political statement intended to only get your votes, but you can see for yourself today.”

Since being elected in 2017, Joe has lobbied to begin pavement of a 1.5 km stretch of the Fairground road. The Fairground hosts major public buildings, including the Buchanan City Hall, Unification Pavilion, the police headquarters for Grand Bassa, and the county superintendent’s compound.

In March 2018, Joe also presented a 32-seater bus he valued at US$82,000 for use in transporting students within his district to school.

The lawmaker said the L$3 million donation being made to the Liberia Marketing Association was a grant and not a loan. However, he did authorize the organization to require its members to repay the funds to allow others to benefit from it, although traders would not be charged interest. Rep. Joe promised that his office would look to the association to send reports on the use of the funds.

“Market women, your contribution to society cannot be overlooked. You are the backbone of the home. Some of you are selling to send your children to school, help your husbands, and do other essential things for your families,” Joe added.

He noted that the funds were for distribution to petty traders and “not those with big market.”

Joe’s presentation of the donation, which he had promised to make in his first 90 days in office, came much later. He explained that illnesses affecting him and his wife had caused that delay “but what matters most to me is the presentation of the fund. We have fulfilled almost all of our campaign promises.”

A large check was presented to the LMA’s vice president for Grand Bassa, Victoria Sherman, who thanked the lawmaker for fulfilling his promise.

“This money is timely; our marketeers are crying daily because of the Coronavirus – no buying – so this money will help us to grow our businesses,” Sherman said.

“We will ensure that all of them benefit from this grant. We are happy that you gave us this money because it will help us a lot.”

Several prominent Grand Bassa politicians witnessed the presentation of the check, including Foreign Minister Gbehzohngar Findley, who has been making moves akin to someone planning a run for the Senate.

Findley told attendees of the program that he had no doubt in Joe’s ability to deliver on all his promises. The foreign affairs minister raised an additional L$1.7 million (US$8,543) from himself and other prominent guests to make the total amount L$4.7 million (US$23,618).