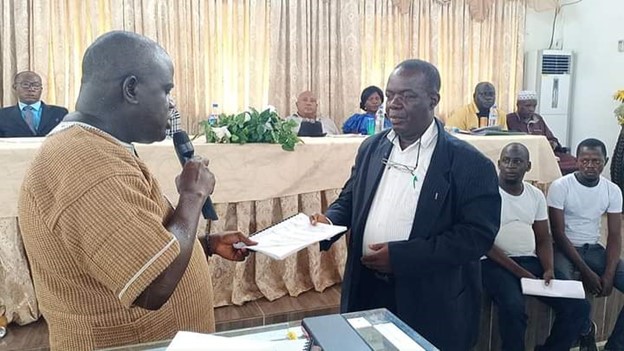 BUCHANAN, Grand Bassa – Rep. Matthew Joe has presented a report to his constituents in Grand Bassa’s third district, detailing his legislative activities over the past two years.

The lawmaker presented his report at the Buchanan City Hall on March 7 in the presence of residents of his district and other dignitaries as well as top government officials. Joe told attendees of the program that the report covers his activities at the 54th National Legislature and within the district from January 14, 2019 to January 11, 2021.

He added that the document covered his contributions towards health, education, transportation, and infrastructural development.

“It provides information on the presentation of L$3 million to the Liberia Marketing Association’s Bassa Chapter, as well as L$500,000 to Ablojay Women,” Joe noted. “It explains the two categories of supplementary payroll, the activities of the district, extraordinary sittings, humanitarian gestures, payment of medical bills, tuition, house rent, and other financial contributions to bereavement, among others.”

Joe, who chairs the House’s Committee on Public Works and Rural Development, also recounted that he had only missed 6 of the 210 sittings held by the House of Representatives from January 14, 2019 to October 9, 2020. Those absences, he said, were necessary to allow him to attend to matters in the county.

While he noted that the House had approved 87 resolutions, bills, and petitions, he did not name any of those that he authored.

Speaking on his contributions towards the health sector, Joe said his office spent L$185,000 to assist citizens who could not afford their medical bills. He also reported that he had “made available over L$841,000 and US$6,620 in Humanitarian Gestures during the Covid19.”

Joe also addressed his contributions in the education sector, noting that he was currently sponsoring 75 students through scholarships at the Grand Bassa Community College and other universities.

“From the records available, the monetary worth of the scholarship is US$5,200,” he said. “We intend to increase both the tertiary and secondary students on our scholarship every year. Over the last 24 months, I have provided a total of L$650,000 and US$4,700 in financial aid as well.”

Speaking on infrastructure development, the lawmaker said he had empowered the District Development Council to rehabilitate major feeder roads in the New Buchanan Block D Community, construct a market shelter for the people of Small Fanti town, and provide seven bundles of zinc to the Own Your Own Community Market.

Furthermore, he said the Ministry of Public Works was being engaged to ensure that the reconstruction of a bridge connecting Buchanan and the Grand Bassa Community College would be captured in the 2021/2022 national budget.

In presenting his accomplishments, Joe said he was doing his duty as a public servant. “Liberians expect a public servant to be a person of good moral character and integrity; law-abiding; and committed to duty,” he added.

During the 2017 campaign, Joe had made four major campaign promises which he has since fulfilled. The promises included providing a 32-seater bus to students in Buchanan, the establishment of the district development council, provision of L$3 million in loans to market women, and the construction of the Fairgrounds road.