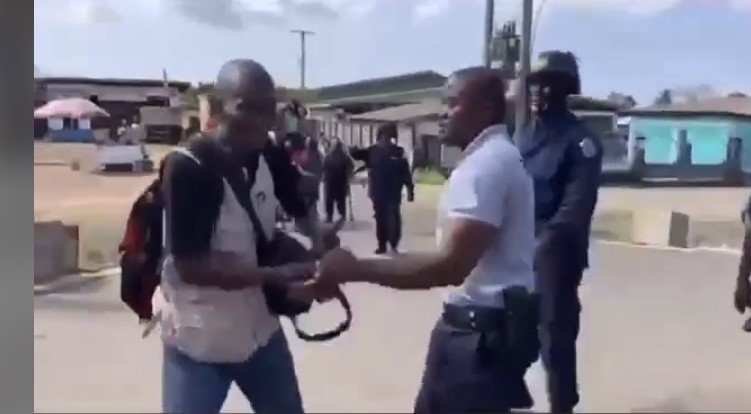 MONROVIA, Montserrado – One week since the assault of a Bush Chicken reporter, Zeze Ballah, by an officer of the Liberia National Police, an investigation ordered by Inspector General Patrick Sudue is yet to be concluded.

Ballah was covering a protest at the St. Moses Funeral Parlor on November 10 where family members had gathered to demand the release of three young men who were hired by the owner of the funeral home, Moses Owusu, to work on his goldmine.

Owusu has maintained that the men drowned in the St. Paul River, after the canoe transporting them capsized. However, the families have rejected the claim, suspecting that the men are still alive and held against their will. Their protest was meant to draw more attention to the situation and demand the release of their children.

In a video trending on social media, a regional commander in Montserrado, Joshua During, can be seen physically assaulting The Bush Chicken’s reporter, who was recording a video of the protest. The journalist noted that his equipment, including cameras and accessories worth over US$700, were confiscated by the police officer.

Immediately after the incident, The Bush Chicken filed an official complaint to the Liberia National Police and issued a copy to the Press Union of Liberia. The union condemned the action of During and immediately accompanied Ballah to the police’s Professional Standards Division, where he was requested to make a formal statement.

In a statement, the Press Union described Ballah’s treatment as inhumane, disturbing, and unacceptable. The union said it believes that the action of the police was intended to prevent the media from covering the protest at the funeral home. It called on senior police administrators to take appropriate actions against the perpetrator of the violence.

Meanwhile, Inspector General Sudue and his deputy for operations, Melvin Sackor, have condemned the situation and called for an immediate investigation.

However, on Tuesday, police spokesperson Moses Carter told The Bush Chicken that the investigation into the complaint had not yet concluded.

“As soon as the Standards Division is through with the investigation and submits the findings, we will inform you, the press,” Carter said.

Meanwhile, the Liberia Association of Rights Activists, a U.S.-based organization has filed a complaint to Human Rights Watch against the police officer for his assault against the journalist.

The group noted in the official complaint that the recent situation is not the only instance of violence against journalists in the country.

“On February 15, 2020, Journalist Zenu Miller lost his life after being severely flogged by officers of the Executive Protection Service (EPS),” it said.

“In May of 2020, there were 8 separate incidents of abuses against journalists in Liberia by the Liberian National Police and other institutions.”

For covering the same protest at the funeral home, the Press Union also issued a statement on Monday noting that there had been death threats issued against another journalist working for Spoon FM and Spoon TV, Gloria Tamba.

According to the union, a complaint from the Spoon FM and Spoon TV’s management states that two men had warned her on separate occasions to abandon her continued report of the story or regret her action. It said the management also complained about two strange men in search of her in her community.

“She has been advised by neighbors not to go at her home. She hasn’t been going to work for over three weeks based on the sustained threats from these unknown men,” the Press Union quoted Tamba’s managers.

The union has expressed deep concern for the safety of Tamba and other reporters in the country and called on the police to ensure safety for journalists.

Featured photo is a snapshot from a Joy TV video