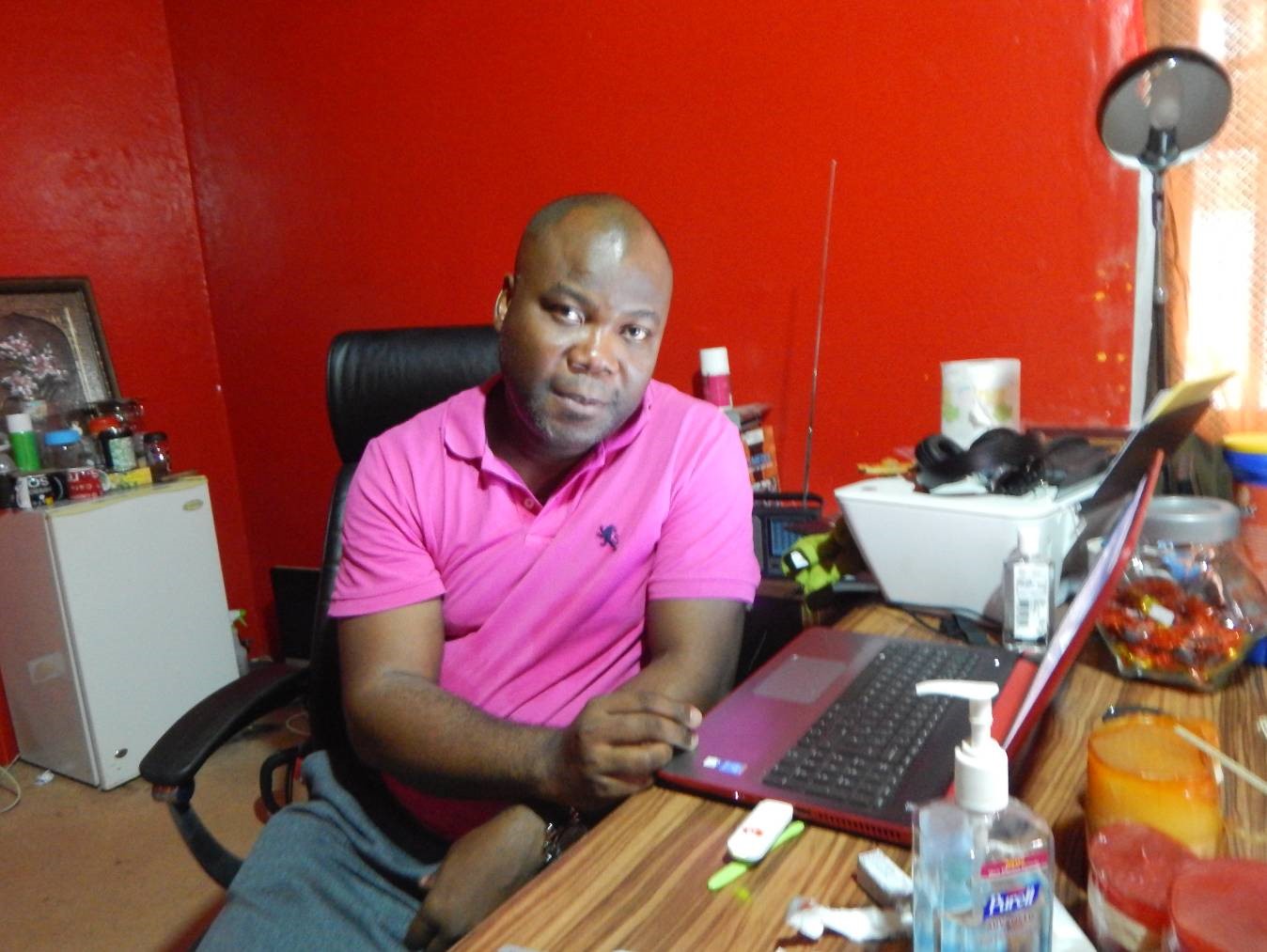 Over a relatively short time, Rodney Sieh has built one of Liberiaâ€™s most trusted and most awarded newspapers.

The managing editor and publisher of Front Page Africa points to his knack for generating intense reader interest as key to his newspaperâ€™s success. Sieh says stories on the front pages of newspapers have to be sensational to attract the readerâ€™s attention.

â€œIf a writer is not sensational, no one is going to buy his or her newspaper,â€ he said in an interview, as he recalled a Front Page Africa story titled â€œL$5 For Sex,â€ which he said grabbed the attention of President Ellen Johnson Sirleaf and members of the legislature.

He said that headline helped to sell many copies of his paper and also raised awareness on prostitution, pointing out that â€œPresident Sirleaf and members of the legislature got involved.â€

Growing Up With Journalism

Siehâ€™s current position as a leader in the Liberian media sector is not surprising given his pedigree and past experiences. Sharing blood relation with both the Daily Observerâ€™s Kenneth Best and legendary media pioneer Albert Porte, he grew up surrounded by news and was mentored by several veteran Liberian journalists including Philip Wesseh of the Inquirer, and T. Max Teah.

He recalls always being in the Daily Observer newsroom, then located on Crown Hill, to watch Burgess Carter, Sando Moore, and others write and lay out the paper.

As a young child, Sieh knew he wanted to become a journalist, and he made his official foray into the field as the editor of the Cathedral Catholic Schoolâ€™s newspaper.

He later worked for the predecessor to Radio Veritas, helping to produce programs targeting high schoolers.

Before the outbreak of Liberiaâ€™s civil crisis, Sieh worked with the Monrovia Daily Post Newspaper.

BBC Correspondent in the Gambia

During the war, the budding journalist sought refuge in the Gambia, where his uncle Kenneth Best had also fled and established a Gambian version of the Daily Observer. He was then recruited as a stringer for the British Broadcasting Corporation.

In 1994, when Yaya Jammeh and a group of young officers of the Gambian National Army seized power from Dawda Jawara, Sieh and another reporter from Bestâ€™s Daily Observer were fortunate to land the first interview from Jammeh.

Being a Liberian and very much familiar with the 1980 coup staged by the Peopleâ€™s Redemption Council of the late Liberian President Samuel K. Doe, Sieh said he asked Jammeh whether he would follow a similar trend as Doe, who came to power through a coup and subsequently abused human rights.

Jammeh told Sieh during the interview that he would be different from Doe and would respect human rights. But as the days went by, that turned out to be a lie.

The Gambian Daily Observer reported on human rights abuses by Jammeh, resulting in Bestâ€™s arrest and deportation to Liberia.

When this initially happened, the BBC convinced Sieh to break the story on Bestâ€™s arrest at the risk of endangering his life. Sieh conducted a two-way interview where he spoke about Bestâ€™s arrest and deportation.

Following the interview, Sieh escaped to London and later traveled to the United States.

While in the United States, Sieh furthered his education in journalism. Upon completion, Sieh worked with several American newspapers including Newport News,Â Syracuse Post Standard, and theÂ Daily Record.

As the 2005 elections season arrived, he felt compelled to build a medium through which the less fortunate in society could express themselves without fearing for their lives.

With only one computer, one correspondent, and barely any capital, Sieh started Front Page Africa. He took advantage of the cheapness of the internet to buy his newspaperâ€™s domain name.

The name came about to him while he was working for the Post Standard as a designer of the newspaper front page, he said. He saw himself as an African who was a â€œFront Page Designer.â€ The name Front Page Africa then came about.

His new paper was not a solo venture. Sieh said several of his cousins were involved during the initial stages. Additionally, â€œSidiki Tarwally and Jackson Kanneh also formed part of the brainstorming process in a meeting held in Philadelphia about the newspaper,â€ he said. As people began to trust the FPA brand, they started to supply him with information, which he said he would verify before publishing.

Sieh refuses to identify his single correspondent in Liberia but said the writer also worked for the United Nations Mission in Liberia.

â€œWe compensated our correspondent back in Liberia sometimes through the little amount collected from individuals associated with FPA in the United States,â€ Sieh said.

Still based in the US, Siehâ€™s mystery reporter perplexed many readers, he said, adding that people still wonder how FPA received the photo of former President Taylor in handcuffs at the Roberts International Airport after being arrested by the United Nations in 2005.

â€œOur U.N. correspondent was at the RIA and took a shot of Taylor,â€ he said.

The confidence of this new paper, coupled with Siehâ€™s ability to scoop exclusives, led some readers to conclude that FPA was not Liberian-owned.

The early days brought Sieh many sleepless nights, and he said he sacrificed a lot. His social life, he said, was â€œnonexistentâ€ and he had to break bonds with many friends because he simply did not have the time to spend with them.

Having operated his news outlet for over three years, when Sieh met the former United States ambassador to Liberia, Linda Thomas-Greenfield, in March of 2008, she encouraged him to return home and help his country.

â€œI felt at the time that Liberia needed a newspaper like FPA to really spell out the issues of corruption, human rights, female genital mutilation, prostitution, and abuse against women,â€ he said.

Sieh said contrary to popular opinion, he does not always focus on political stories, adding that he writes â€œstories that are groundbreaking that will change the minds and attitude of people.â€

Since moving to Liberia, Sieh has experienced challenges.

â€œThere have been two arson attacks on the FPA offices after I finally returned to Liberia in 2010,â€ he said.

He has also been accused by members of various political parties of favoring rival parties.

â€œI receive calls every day from the Executive Mansion complaining about my stories in the FPA,â€ he said, adding that these complaints and attacks motivate him to keep doing his work.

â€œIt has been a difficult journey for the FPA but very rewarding and I believe Liberia needs aÂ voice like ours,â€ he added.

â€œWhenever I write my story, I do not think about being arrested and jailed,â€ he said. â€œI have no regret for what I have written, and if I am called to do it again, I will do it.â€

He said the FPA is where it is today because of the many sacrifices he has made including his incarceration â€œon two separate occasionsâ€ after being sued for articles he published.

Sued and Arrested For Libel

Following a report by the FPA in 2010 alleging that Christopher Toe, the former Liberia Agriculture Minister, had embezzled millions of dollars from public funds, a lawsuit was filed against Sieh and his reporter Samwar Fallah.

Toe demanded US$2 million in damages. Sieh believed that the lawsuit was not really about the former minister but that others who had grudges about FPAâ€™s past news reports were seeking vengeance.

â€œThose behind the lawsuit did not expect the tsunami wave that followed after my arrest,â€ he said.

He was adamant that â€œthe lawsuit against FPA did not make any senseâ€ because the story published was based on a General Auditing Commission report.

â€œI still stand by the story, because if I donâ€™t, it means that the government is lying about what was published in the GAC report,â€ he said.Â â€œThe fine imposed on me was too exorbitant, and if I wouldâ€™ve had to pay the US$2 million demanded by Toe, it would have taken me five thousand years and I would have been dead by then.”

He said some draconian laws in Liberia such as criminal libel need to be removed from the books because â€œthey are not good for the country.â€

Sieh applauded the local and international media for the enormous support shown him while in prison.

â€œI hold my life to all those who fought for my release and if it had not been for them, I would not have been alive today,” Sieh said.

Being prosecuted as a journalist and going to jail for his work is something Sieh considers the biggest obstacle he has faced with FPA.

â€œIt is part of life, and I believe that I have gotten mature over the years as a journalist for my works and now understand the politics associated with the media,â€ he said.

Despite the challenges, Sieh said he is proud that FPA has become a guide to international journalists about Liberia. â€œIt is a validation that the newspaper is doing something good that Liberia can be proud of.”