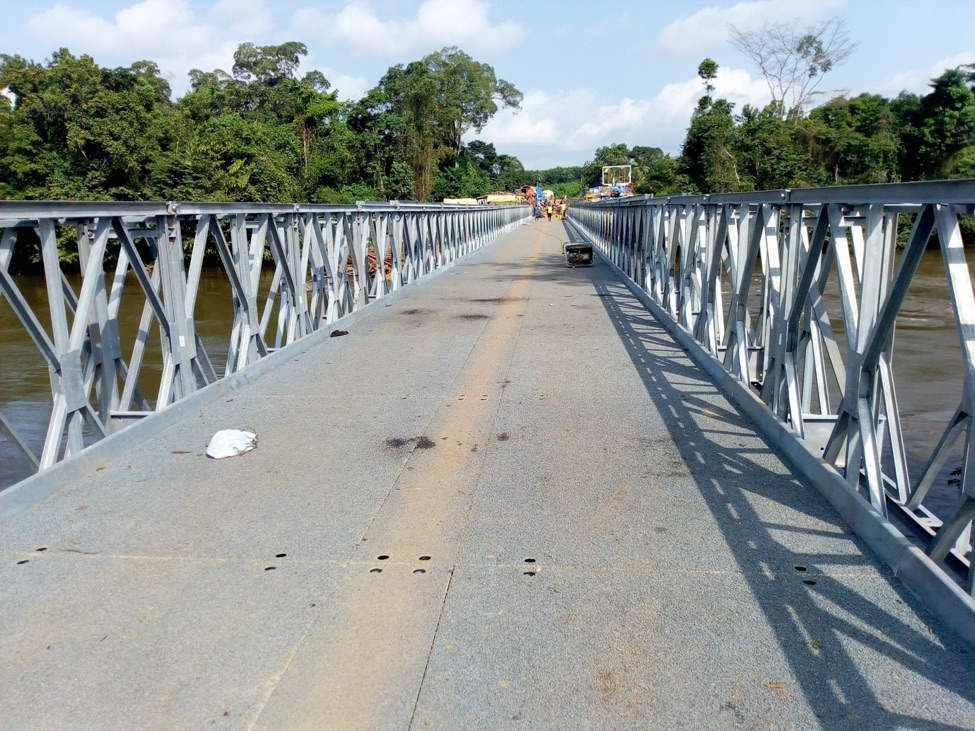 On Monday, July 22, 2019, the final deck of the bridge was laid bringing the installation of the bridge to completion. On Tuesday, July 23, the site supervisor of the company, Napoleon Davis told The Bush Chicken that the bridge would have been dedicated on Wednesday, July 24, 2019, by public works minister Mobutu Nyenpan, but the story changed when Thomas said the company was still doing some concrete works that needed time to get dry.

â€œAs you can see, the guys are casting the concrete and it has to take up to 14 days to get dry,â€ Thomas said. â€œWe are sorry that the bridge will not be dedicated as planned because we have to wait for the concrete to get dry.â€

Thomas said the new date set for the dedication of the bridge is August 15, 2019. According to him, during the waiting period, no pedestrian will be allowed to cross the bridge.

â€œThe minister actually suggested that we allow smaller vehicles to cross but that is not possible for now,â€ Thomas said. â€œBecause if we do that, those guys with the bigger trucks will force their way through and that could have a great impact on the concrete.â€ 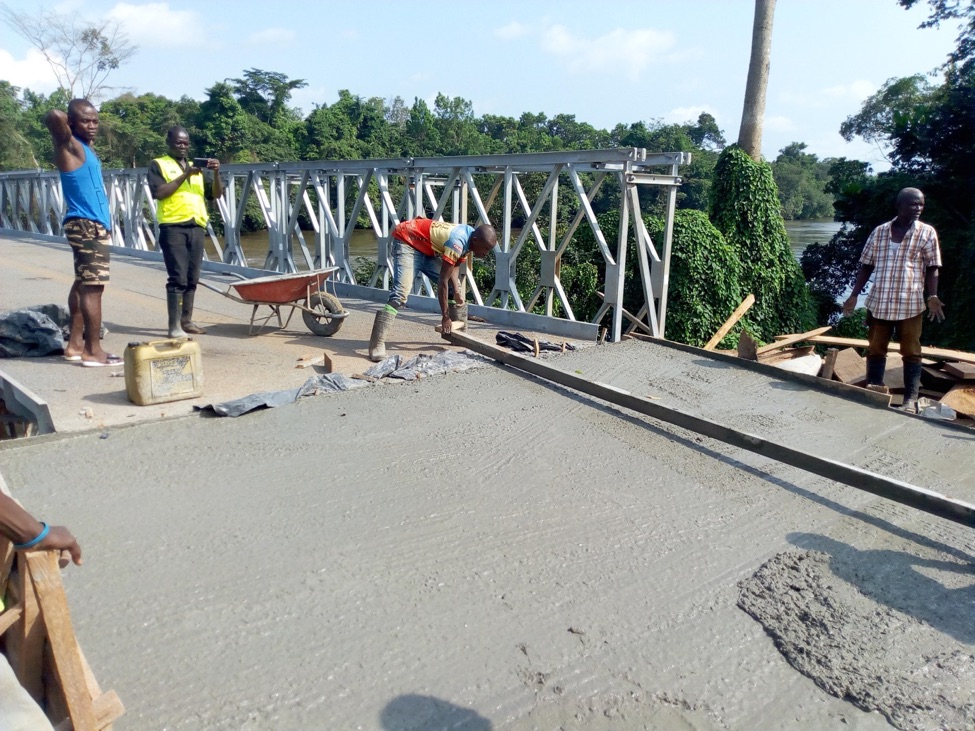 Jupiter Constructionâ€™s CEO said the concrete will take up to 14 days to get dry. Photo: Eric Opa Doue.

Early June this year, River Cessâ€™ Development Superintendent Amos Somah told a local radio station that the bridge would be commissioned before the July 26 celebration. The public works minister also echoed this sentiment, specifically naming July 15, 2019, as the completion date.

Joseph Quansah, a consultant working with Jupiter Construction, however, was not sure of the July 15 deadline set by the minister. He cautioned that the rain would affect the pace of work.

â€œIt has been raining and when the rain is falling, the work slows down,â€ Quansah said. â€œBesides that, we have concrete work to do, so the 15 of the month â€“ I am not sure.â€

Residents of River Cess have been feeling the economic pinch caused by the cutting off the countyâ€™s connection with Grand Bassa. On the morning of May 4, 2019, the temporary path that was built to allow people to commute across the river was washed away by heavy rains.

The elimination of the detour cut off the major connection to the southeast compelling some travelers from Monrovia to the southeast to head north through Nimba and Grand Gedeh while others braved the storm to cross on the Timbo River in canoes and rafts.

Few believed that the company could have completed the construction of the bridge this year and the public voiced their anger at the national government for the delay that led to the detour being destroyed. Meanwhile, civil society actors and residents of River Cess pressured the local county government to find a solution to ease the tension.

The river is now flooded due to heavy rains, but commuters are not allowed to walk on the bridge to get to the Grand Bassa on the other side. Civil society leader George Trokon wants the company or the government to allow pedestrians to be using the bridge to cross while the concrete dries.

On Monday, July 29, private security guards assigned to the bridge allowed five Chinese nationals to cross the bridge. The act angered the public and almost caused a riot. Commuters and motorcyclists maintained that they should also be allowed to cross.

â€œSo youâ€™re trying to tell us that the white peopleâ€™s lives [are] valued more than our own?â€ said Lawrence Jackson, a member of the Liberia Motorcyclist Transport Union. â€œSee all the people been here since this morning and they are afraid to cross because the river is filled, and yâ€™all canâ€™t allow them to cross. But yâ€™all giving white people free chance to cross.â€

â€œLiberians donâ€™t respect their fellow Liberians, but when it comes to people with white skin, you see them trembling,â€ added Nathaniel Glaydor, a Yarpah Town businessman. â€œWalking on that bridge will not spoil anything, but they are denying their own people.â€

Glaydor believes that the security guards have been receiving money overnight to allow people to cross the bridge.

Several commuters who spoke to The Bush Chicken on Tuesday, July 30, praised the company and the government for the work, but also complained about pedestrians being denied access.

â€œLet them allow us to walk on the bridge to get to the other side while they are waiting for August 15 to turn it over,â€ said Jerry King, who sells provisions at the waterside. â€œOnce you can carry your load on your head, they should allow you to do it. Or maybe they want someone [to drown] before they come to their senses.â€

Already, youth from the local community, who usually rescue commuters whenever a canoe capsizes, are saying they will no longer risk their lives to rescue people in case of any trouble due to the high water level.

Davis, the site supervisor, admitted that some Chinese were allowed to cross over the bridge. However, he said they were leaving the country the same day and they did not want to miss their flight. 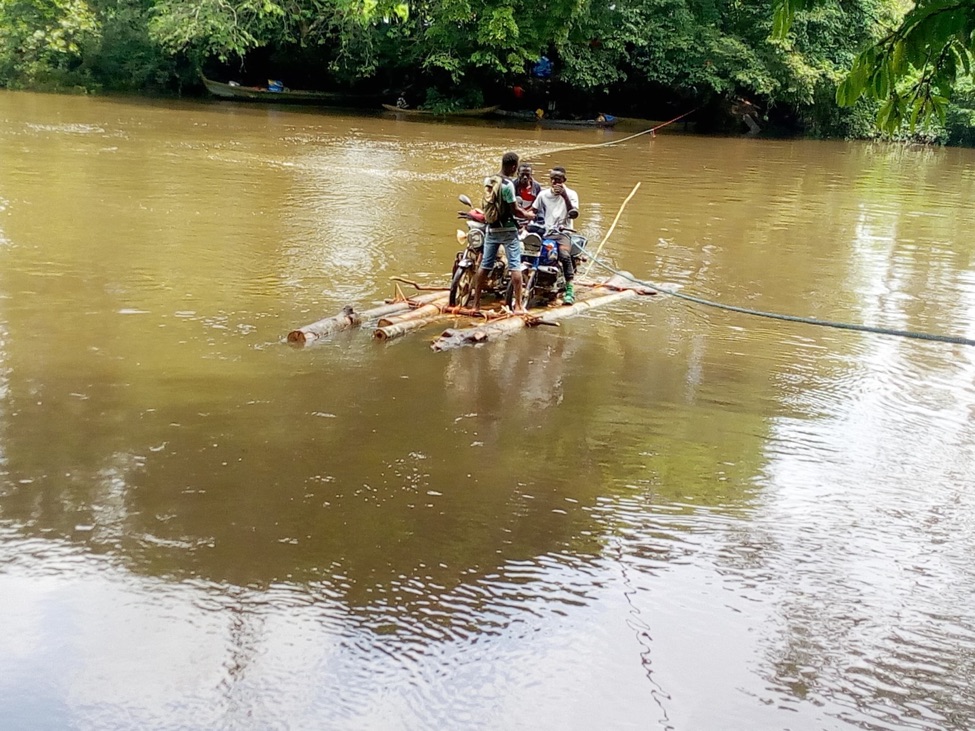 Davis said it is his companyâ€™s first time installing â€œan American standard bridgeâ€ manufactured by ACROW Bridge. An engineer from ACROW Bridge was present during the installing of the bridge to supervise the work.

The project was approved under former president Ellen Johnson Sirleafâ€™s administration but was delayed due to the 2017 general elections. Work began on April 2018 and was expected to have been completed in three months, but was suspended due to heavy rains.

In May and June of 2018, Jupiter Construction conditioned three piers beneath the bridge before the work was suspended in August.

When completed, Davis said the bridge will be wider and taller than the first one and will be capable of holding 80 tons of weight. Additionally, he expects it to last for 100 years. He said it is a modern and more structurally sound bridge.

The Timbo River serves as a boundary between River Cess and Grand Bassa. The bridge was first constructed in 1972 and dedicated in 1976.