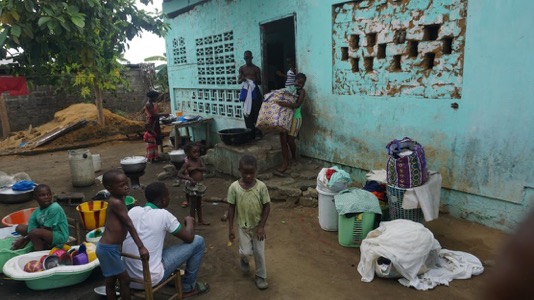 MONROVIA, Montserrado â€“ Residing in one of the 94 housing units at the 72nd Military Barracks in Paynesville is Jaemama B. Doblah, along with her ten nieces, three sisters, and two brothers.
Doblah and her aging mother, who barely walks, left Nimba for Monrovia in 2007 after the demise of her father and settled at the 72nd Military Barracks in search of a better life.
Her oldest sister did the same in the following months, along with her children. Together, they make up over 30 occupants residing in the two-bedroom unit at the military facility.
The family is among the hundreds of squatters at the barracks who have been given an ultimatum by the Ministry of National Defense to vacate the facility by May 1st.
Defense Minister Brownie Samukai has said that the barracks are the official residence of the Armed Forces of Liberia and it was time to take back the facility from squatters, many of whom had been living there for 20 years.
Due to the decision to evict residents from the military facility, Doblahâ€™s oldest sister was out on this particular day in search of alternative accommodation while the older children were left home to pack some of their belongings in preparation for moving out.
Doblah herself had dropped out of school due to lack of support and now sells beef to sustain herself and her family. On weekdays, she gets up at 4 am so that sheâ€™s among the first five or ten persons at one of the several cow shops in the Paynesville Red Light Market.
There, she buys cow livers and tongues, which she sells as â€˜sweet meatâ€™ for L$10 (US$0.09) per piece.

Doblah has been in the business for over five years and one of her nieces, now eight months pregnant, was seen helping her to prepare the meat while the younger children ran around playing.
Her two-bedroom unit has no ceiling and mosquitos and other insects roam freely in the house. However, despite the poor state of the home she lives in, Doblah would prefer to stay in the barracks.
The eviction will force her to lodge with a friend, something that will cause a temporary disruption to her business which is currently her only source of income. For now, the family has nowhere permanent to go and they are appealing to the Defense Ministry to extend the eviction period to 2018.

The Defense Ministry had already extended the deadline for eviction from April to May 1 but that may not have been enough time for Doblah and her family.
Samukai has said that this time, he is serious about retrieving the facility.