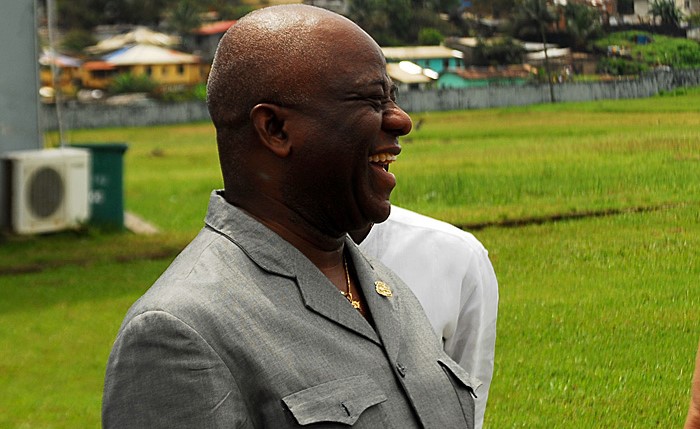 MONROVIA, Montserrado – A group under the banner of Solidarity of Lofa Citizens have presented a check of US$10,000 to Criminal Court C in restitution for Brownie Samukai, the county’s senator-elect.

Samukai, along with two others, was found guilty of economic sabotage, money laundering, and misuse of public money by the court. They had misappropriated close to US$1.2 million of pension funds for personnel of the Armed Forces of Liberia during the administration of former president Ellen Johnson Sirleaf.

The court ruled that Samukai restitute the money back to the government, with half of the amount ordered to be paid in six months. Failure to do so would see Samukai face jail time.

Although the National Elections Commission announced Samukai as the winner of the Lofa Special Senatorial Election in 2020, the commission has not yet certificated the senator-elect. The Ministry of Justice had asked the commission not to proceed with Samukai’s certification after the Supreme Court withheld the lower court’s decision against him.

Neither the constitution nor the New Election Law prohibits a convict from contesting for or being inducted into the Senate. NEC’s regulations and guidelines for independent candidates and political parties, last updated in 2017, also do not bar anyone convicted of a crime from running. The candidate nomination regulations are also silent on the issue.

While the penal code does provide for an individual to be disqualified from public office for crimes such as treason and felonies connected to employment as a public servant, it also empowers the court to disqualify the convict. In Samukai’s case, the request came from the Justice Ministry, not the judiciary.

In light of the impasse, some Samukai supporters have decided to raise funds to help pay off Samukai’s debt to the court to ensure he takes his seat in the Senate. The former superintendent of Lofa, Galakpai Kortima, presenting the US$10,000 check to the court, noting that friends of Samukai had raised funds. Kortima said the goal is to generate over US$50,000.

“We, the Friends of Samukai, under the banner of Solidarity of Lofa Citizens, are here at the grounds of the Supreme Court and have come to affirm our commitment to paying this money.,” he said.

According to him, Lofa is at a disadvantage in the Senate due to a lack of adequate representation because NEC has not yet certificated him after his overwhelming victory.

Sharing
Tags Brownie Samukai
Contributions to The Bush Chicken are not tax deductible.