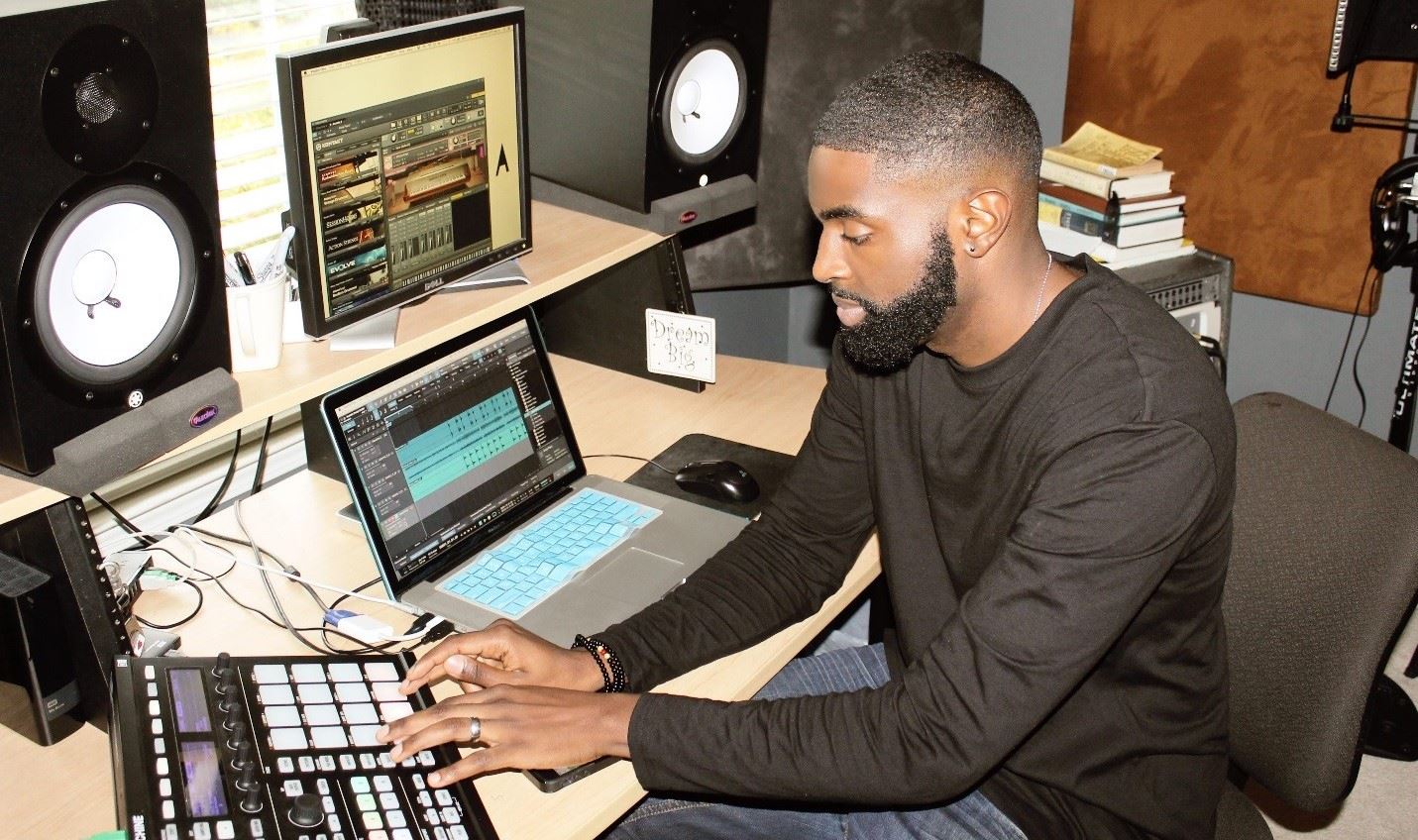 The â€œLiberian Trailblazersâ€ series profiles exceptional Liberians and the work they do. Recently, The Bush Chicken had the pleasure of interviewing Lasanna â€œAceâ€ Harris, a Grammy-nominated producer who has worked with the likes of LeCrae, Nicki Minaj, and T.I.

His new album, ATLiberia, was released on Tuesday, Nov. 10 and is being billed as “African music meets hip hop and dance.” The collection also features Liberian artist and Hott FM personality Cypha D’King.

Tell us a little about your background and upbringing? How did you get into the music industry?

I was born in Decatur, Georgia and moved to Gwinnett County, a suburban area of Metro Atlanta. Iâ€™m one of seven children, and my dad had a church in the city of Atlanta, so I had a hard time determining where I fit in.

I was the only black kid in my class until 6th grade but when we went to church every Sunday, I would be around Liberians. My cousins, who also attended my church but lived in Atlanta, would tease me about not being from Atlanta. I always had this back and forth where I wondered, “Am I Liberian or am I not? Am I from Atlanta or am I not?”

I grew up playing drums in the church. My oldest brother is also a musician, and he introduced me to music – that was really how I got into music at around six years old. Since then, I kept pursuing it. When I was about 14 years old, another of my older brothers and I would hang out together, and we used to ride around listening to Jay-Zâ€™s â€œHard Knock Lifeâ€ album. We actually wore it out. At the time, we had to hide and secretly listen to it because our father didnâ€™t approve of such music.

There was a track on the CD called â€œJigga what, Jigga whoâ€ and I loved that song. I wanted to know how the producer got it to sound like that. So I researched Timbaland, who produced that record. Then I went home and tried to recreate the sound.

Fast-forward and two years later, a friend of my cousin gave me a really expensive keyboard and from there, I got into production.

Many of our readers may not be aware of your body of work to-date. Can you tell us a little about your experience in the industry?

Iâ€™ve been blessed to work on some great projects. My first major placement was around 2008â€“2009 after I left my job in corporate America to pursue music. My business partner and I had a few songs with a new group called Rock City. We had a production on their project, but it was never released.

My first released work was with LeCrae in 2010 on an album that was Grammy-nominated, which was a blessing. It was faith-based music and it kinda brought me back home to my faith,Â which I had kinda strayed from during my college years. I also worked on several other projects on LeCraeâ€™s record label after the Rehab album project. What was your â€œAfrican-Americanâ€ experience like growing up in Atlanta and how do you think it shaped your creative perspective?

I feel like for me, my production style wasÂ initially unconsciouslyÂ very percussive and rhythmic. I grew up in an African church and I played drums. At the church, if the keyboard was broken, we still had music with the drums. I think that upbringing definitely helped influence my production style.

I understand my accent isnâ€™t that great but I grew up around Liberians, and that is who I am. True enough I havenâ€™t been to Liberia yet, but I plan on going soon. The Ebola outbreak derailed my initial travel plans.

When I went to college, two of my good friends who were also my roommates made it very obvious that foreign culture is very strange to many blacks in the south. Iâ€™d bring my African food to school, and theyâ€™d ask me if I was eating Hyena blood it was just constant jokes.

What was the inspiration behind the ATLiberia project and what has the reception been so far?

I had a good year in terms of placements and producing for other artists,Â which was great because that is such a big part of my business. But I feel like, as a producer and creative person, all the great producers either broke an artist or a sound. While Iâ€™m very thankful for what I have been able to do for other artists, I felt like there was still something missing for me in terms of my defining contribution to the industry. Iâ€™ve always wanted to do a project and around the time I was thinking about developing something, the Michelle Williams â€œSay Yesâ€ song was released. I thought, “Wow, why didnâ€™t I do this?” My mom hears the song and tells me she thinks I should try to incorporate an African beat in my music.

So a few months later the Nico and Vinz song â€œAm I Wrongâ€ is released and becomes a smash hit.Â  I decided then that I needed to do a project that is a reflection of my heritage. I was sitting in my studio late one night, and God gave me the idea. I ran it across my business partner, and he was in full support of the project. The reception has been great!

Americans love it because they can identify it as something they associate with Caribbean music,Â which is cool. And the Africans love it because they view it as African music with a traditional taste. Me doing this project isnâ€™t me representing myself as the most “Liberian” Liberian youâ€™ve ever met, but more so this is my interpretation of growing up Liberian in America, hence the name. This music is for everyone.

What can our readers expect to hear on this project? Who are some of the people you were able to collaborate with andÂ who do you want to work with in the future?

We had some great collaborations on the project. R. City from the Virgin Islands, Two C, Lloyd Musa, D. Woods (formerly of Danity Kane), Yung Muse, and Nate K.

Some other artists we would like to work with in the future are Ice Prince, Stonebwoy, and Takun J. In a perfect world, Iâ€™d love to take Akon, ColdPlay, and some other artist and put them on a song and really introduce Americans to international/African music. The African scene is growing, and we are going to be a part of that, if not helping to spearhead the movement.

The variety and quality of Liberian music has seen a drastic improvement over the past 5 to 10 years. How do you plan to help support the music scene in Liberia?

This project has definitely enlightened me more onto the Liberian music scene. Liberia has a lot of talent – a lot of raw talent. The hipco scene is dope. It has an edge to it. For me, I feel like there is an opportunity to help polish the talent and the production; then our sound could be as popular and widespread as any other music. Itâ€™s just, in my opinion, due to lack of resources and education.

I have plans to work in this area. I am just in the beginning stages of formalizing plans on how to contribute to developing the music scene over there. For me, hipco reminds me of what we call trap music here – the rawness, its edge. How do we take that and make it global? Thatâ€™s what I plan to develop some ideas around.

Are there any plans in the future to travel with some of the people on the project for live performances or do you have a web presence where fans can connect with you?

The plan is to tap into the internet and find people who will appreciate what weâ€™re doing, Liberians, Americans, anyone that feels the music. Performances will be happening, and weâ€™ve done a few live events with Lloyd Musa and D. Woods already.Â  Weâ€™re still mapping out where our lane is and where the music will sit and live best. Weâ€™ve done some live performances on radio and are definitely taking advantage of all media opportunities.

The travel to Liberia is definitely in the future, just working on determining a time when it makes the most sense to go. Weâ€™re not focusing exclusively on Liberians though because the music is for everyone, but weâ€™ll definitely be open to performing any and everywhere if it makes business sense. A part of the proceeds of the project are also going to support a mission in Bong County that is funded my church.

What is your advice specifically to American-born or raised Liberians interested in engaging in projects or businesses that can bring awareness and positive attention to Liberia and its culture?

For me, there is no way I could have done a project, using the word â€œLiberiaâ€ and not give some of the profit from that project back to my people. I think itâ€™s about making sure your project is pure and adds value to help your own people.

What are your upcoming projects and what should your fans be on the lookout for?

Right now the focus is on ATLiberia, getting the word out and doing press on the project is our priority, but I am also working with some artists on smaller projects. I would love to hear from the fans and they can get in touch with me through my social media channels:Â InstagramÂ andÂ Facebook.

ATLiberia is available for download through Amazon and iTunes. The interview was edited for clarity.