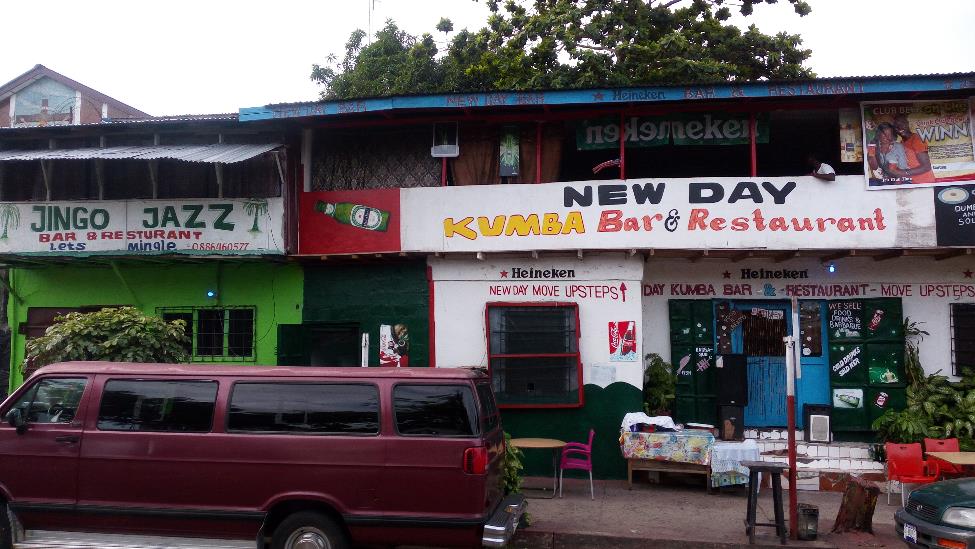 Expanding on my recent review of the rooftop bar at the Royal Grand Hotel, The Bush Chicken readers may be interested in a brief tour of some dedicated drinking establishments that stand out, but are more representative of the typical drinking scene in Liberia.

The list that follows reflects five(ish) of my favorite bars in Greater Monrovia. Itâ€™s not exhaustive as Iâ€™ve sampled very little alcohol on Bushrod Island or beyond ELWA junction.

However, all of these spots are economical, have something that sets them apart, and offer a fairly wide selection of drinks, and a decent selection of music.

Downtown is my favorite drinking area in Monrovia. Not listed here, but honorable mentions are the rooftop bar across from the mosque at the corner of Michelin and Benson Streets and the bar/eatery across from Embassy Suites in Mamba Point (a great place to see visiting Westerners misbehave on the weekends). Upper Link: This is probably my favorite bar in Monrovia. Itâ€™s on Front Street just up from the Water and Sewage Corporation (perhaps, not the most ideal reference point).

Thereâ€™s an indoor drinking area, which has a TV that screens soccer matches, next to a curio shop, but the real highlight is the elevated open air terrace. In the rainy season, the shrubbery can get a bit high, but otherwise, thereâ€™s a great view of all the market activity below. Thereâ€™s even a brief opening that allows a glimpse of the port.

All sorts of vendors pass by. I was once drinking a large club beer (almost always my drink of choice) with a friend when a vendor hawking knives and flashlights strolled through. My buddy spent the rest of the evening fooling around with his newly acquired switchblade while I finished my beer in a heightened state of anxiety.

Upper Link has a grill. I think they offer meat, but the roasted fish usually looks more appetizing. Rivoli Cinema Bar: This bar is on the second floor of the Rivoli Cinema on Broad Street, just up from the former location of the Ministry of Transportation. It used to stand out for offering locally produced products from Ritco Distilleries and is where I had my first coffee whiskey.

Ritco liquor seems to no longer be on the menu, but what canâ€™t be changed is the awesome location. The balcony overlooks the teaming activity on Broad Street and at the Ministry of Finance.

As itâ€™s an upstairs indoor bar, I donâ€™t believe thereâ€™s a grill on the premises. Another cool (unusual may be a more apt word) aspect is that accessing the barâ€™s bathroom requires walking through the dark theater itself. Ashmun Street Snapper Hill Bars: Thereâ€™s a trio of about three bars here. I donâ€™t think the name of any of them is all that important, but the last two are Jingo Jazz and New Day. They are all on the right of the road as one walks up Ashmun Street (before UBA).

The first is cool as itâ€™s a rooftop bar, although it doesnâ€™t have the greatest view. It doesnâ€™t get too busy, but the music blasts and there is often dancing. The other two establishments are on the sidewalk, under a shady canopy (although at the time of my last visit, this had sadly been removed). Once it gets dark and the street quiets down, itâ€™s an intimate space. I shared a number of pleasurable and quiet drinks there with a young lady I was attempting to seduce. Nassebar: While Sinkor is quite the lively area, thereâ€™s not much in the way of a bar scene that has attracted me. Thereâ€™s a cavernous bar/provisions store roughly across from City Hall thatâ€™s an interesting place to visit, but by far my favorite spot is in Fiamah, off 21st Street.

I covered the launch of Nassebar for Bush Chicken. Things have calmed down a bit now, but itâ€™s still got some nice outdoor seating and an attractive interior as well.

There is usually a grill. Royal Plus: Outside of the Sinkor/Monrovia area, my drinking forays are significantly more limited. I was first introduced to Royal Plus when doing research for another news story. Iâ€™ve returned a few more times.

Royal Plus is expansive and the highlight is going during a show when the entire space is full of raucous partygoers. On other nights, the place seems vacant, which can be a nice change of pace from the more cramped drinking spots in town. There is also a pool table.

All sort of grilled and other food items are available just outside of the premises.