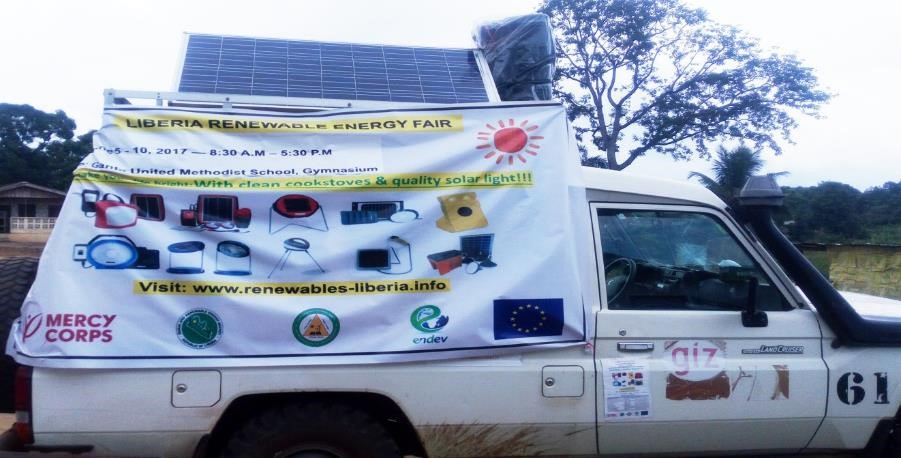 GOMPA, Nimba â€“ The John Wesley Pearson High School in Ganta received a donation of assorted solar energy equipment from Mercy Corps last week as a means of providing lighting on the campus.

The donation is part of Mercy Corpsâ€™ plan for an additional 59 public facilities within the country that would include public schools and clinics.

Cephas Tetteh, Mercy Corpsâ€™ energy specialist, made the symbolic presentation on behalf of his institution, in the presence of the press.

The donation to the school includes four pieces of solar panels and two 60-watt power inverters, along with accessories. The equipment all amounted to an estimated cost of US$1,000.

The J. W. Pearson High School has been running a night-time adult literacy program at the school and Tetteh believes the donation would be a significant boost to the program, adding, â€œThis will be able to provide a good learning opportunity for the students at night.â€

Timothy Karlie, the vice principal of the school, received the donation on behalf of his institution. He stressed that the schoolâ€™s authorities are delighted about the donation, as electricity supply has been one of the challenges faced by the institution.

He said while the power supplied by the solar panels is not enough to supply the entire schoolâ€™s electricity needs, Mercy Corps â€œtold us that in subsequent time they going to be providing more.â€

â€œWe will continue to work with our retailers here so that the people in Ganta and Nimba County can get access to solar lights and clean cooking stoves,â€ said Pamela Anderson, a representative of Mercy Corps at the Energy Fair. â€œThese products are materials that last more than five years â€“ they are durable. When you look at the length of time these products stay and the cost to get them, you will understand that they are very much affordable â€“ I can tell you that energy is here to stay in Liberia.â€

The Light Up Liberia program is supported by the European Union and aims to expand renewable energy to the vulnerable population of Liberia, creating an avenue where Liberians, mainly those in rural areas, can have access to affordable and assessable clear renewable energy to better their living conditions.