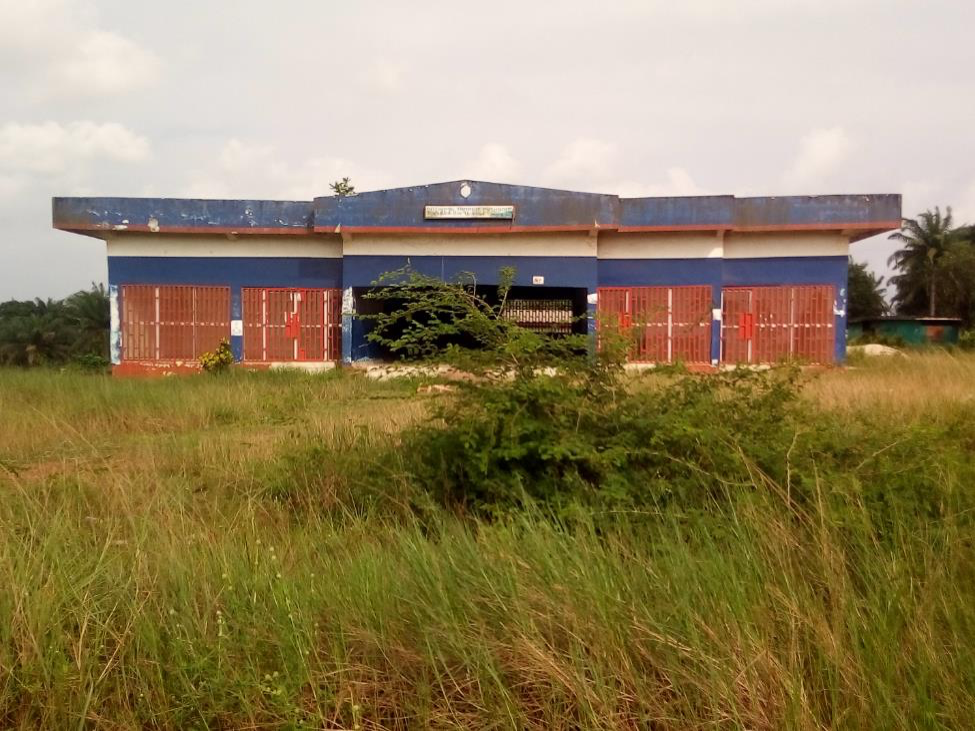 BUCHANAN, Grand Bassa â€“ After spending over US$97,000 to construct a bus terminal in Buchanan, the National Transit Authority appears to have abandoned the new facility, mainly due to its poor choice of location.Â  The management of the National Transit Authority and passengers have abandoned the newly constructed terminal in Own Your Own community in new Buchanan.

The NTA, under former Managing Director Karmo D. Ville, contracted Dougbor Group Inc. on April 30, 2013 for the construction of the terminal at a cost of US$97,219.44. However, since the completion of the terminal, it has not been used by the NTA although the agencyâ€™s buses commute between Monrovia and Buchanan daily.

One reason might be the isolated location of the terminal â€“ it was built in the Own Your Own community, with barely any activity going on nearby. The abandoned terminal is now a haven to petty criminals and drug users, which serves as a deterrent to passengers.

Some residents of Grand Bassa have described the terminal as a waste of public funds because it is not serving its purpose.

Emmanuel Wragbo, a resident of Buchanan, told The Bush Chicken on Friday that the NTAâ€™s decision to construct the terminal in an isolated area is a clear indication of a waste of public funds amid the economic hardship faced by Liberians.

â€œThis is the waste of taxpayersâ€™ funds â€“ waste of government money,â€ he said. â€œIf you are carrying development somewhere, you need to send your assessment team to do an investigation as to whether the place you want to do the development will be conducive for the people traveling. Will they come there? But they did not and just spoiled that money and it turned [it] to [a] toilet house. The place is bushy, and nobody goes there. These are things we talk about â€“ government needs to use the little cash theyâ€™re getting wisely. Taxpayers cannot be paying their money and [theyâ€™re] just expending it on something.â€

Wragbo said the NTAâ€™s decision to build the facility was just a ploy to justify spending unnecessarily. He called on the new government to ensure that those involved can repay the money to the government.

He also recommended that the building should be given to the community to be repurposed, perhaps for a community market.

The NTAâ€™s transit patrol officer assigned in Grand Bassa, Roosevelt Jacobs, admitted to receiving complaints that the terminal has been abandoned and that there are petty criminals, also known as zogos, living there.

â€œI have been there, but I didnâ€™t see any zogos there. But for now, we are not using it [the terminal]. We can now park at the general market,â€ he said.

Jacobs said he talked to some passengers but who expressed fears about criminals at the terminal given its isolated nature.

NTAâ€™s corporate communications officer, Tybalt S. Jimmie, admitted that the agency had abandoned the terminal, but he said he blames the Ville administration for authorizing the project.

â€œYes, I will accept that it is abandoned because of the present situation it is in, so I will refer to that as abandoned,â€ Jimmie said during an interview at the NTA head office on Wednesday. â€œBefore you carry on any project, you have to observe the environment, involve the stakeholders, and challenges. Then that project will be successful, but otherwise, on your own, the project will be abandoned because the people will not have a passion for that particular project.â€

Jimmie said the new management may likely build new terminals across the country given that other unfinished and abandoned terminals were built too far.

Meanwhile, the NTA management has negotiated with the Federation of Road Transport Union of Liberiaâ€™s Grand Bassa branch to use their parking station on Kilby Street as a terminal.

Ahamandu B. Zwannah, secretary general of the union, said the negotiation had been made possible by former Grand Bassa Superintendent Levi Demmah. In the agreement, NTA would be responsible for maintaining the toilet facility and the entire parking station.

â€œWhat they can do is to maintain the entire parking; they donâ€™t have [the] right to interfere in our affairs, likewise ourselves, none of our cars are going there except they have break down and call us then we call our supervisor at Monrovia junction to send car there,â€ Zwannah said in a phone interview.

Prior to the move to the parking station, NTA buses squatted on Gardiner Street, adjacent the St. Peter Claver Catholic High School.

Apart from the Buchanan terminal, there are other terminals that appear to have been poorly planned. The Kakata and Gbarnga terminalsâ€™ construction has come to a standstill and the terminal in Ganta has also been abandoned. Jimmie, the corporate communications officer, believes that this also happened because the previous administration did not select adequate locations for those terminals or properly involve the local population.

According to a former employee who was a part of the assessment of terminal locations, the locations of the terminals were selected for their future growth potential. The former employee declined to be named.

The NTA operates in eight counties, including Montserrado, Nimba, Bong, Margibi, Grand Bassa, Grand Cape Mount, Lofa, and Grand Gedeh. However, due to the unsafe road conditions during this rainy season, operations in Lofa and Grand Gedeh have temporarily stopped.