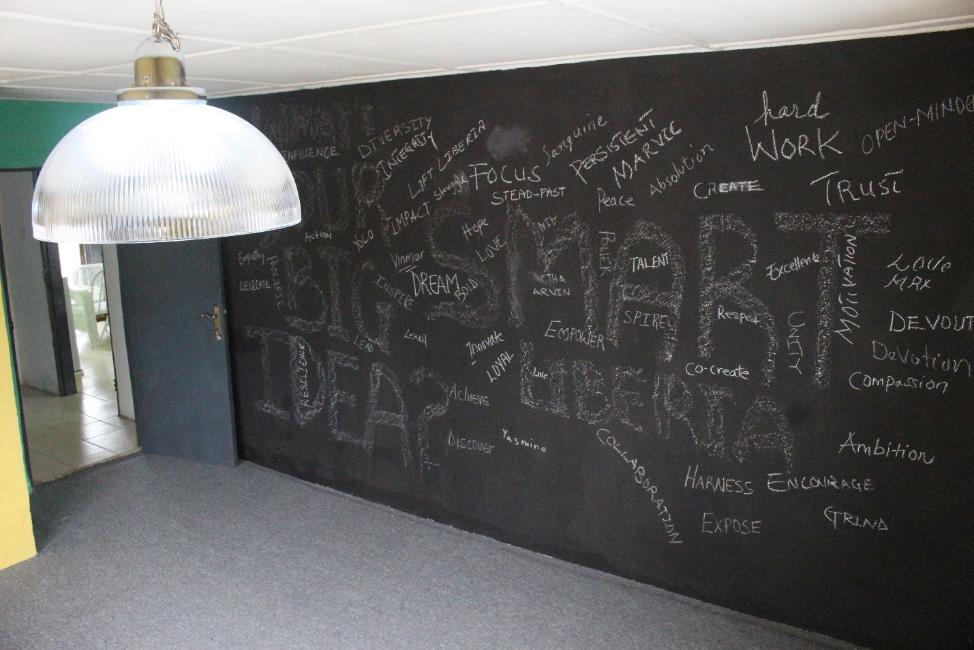 When Mustapha walked in our offices, he had no idea where his next school fees would come from. He had been kicked out of the exam hall because he was behind on his tuition payment. His father, jobless, and his mother, a â€œsweet padâ€ seller could not raise enough money to put food on their table, let alone pay his school fees.

Having graduated as one of the best in his high school, Mustapha would have been a dropout, had he not stumbled on our African Leadership Academy Application Info Session last Augustâ€”an opportunity that would change his life forever.

The African Leadership Academy is a world class pre-college institution in South Africa that is dedicated to developing the next generation of African leaders. It identifies and recruits some of the most visionary and talented young people on the continent and trains them to solve some of the continentâ€™s most pressing challenges.

Although he was not present on the day of the event, he heard about the application process and took advantage of it. He applied, hoping that ALA might be his window of opportunity to escape poverty. He came to the office almost every day and dedicated himself to the application process. While most of his friends who didnâ€™t believe in the fairness of the process thought he was â€œwasting his time,â€ Mustapha wasnâ€™t discouraged. He was not a skeptic.

When he had no transportation money to leave his house in Logan Town for our office, where he had access to the internet, [he used it] to complete his application, he would borrow money from a neighbor. When the office internet was occasionally down, he would run to the U.S. Embassy Library for access to do his work.

The pains and stress of the application process were eclipsed by the imagined benefits of admission to such a world-class school. To encourage himself to work harder, he often fantasized. â€œI would be the first â€˜sweet padâ€™ sellerâ€™s son to graduate from Harvardâ€.

So he kept pushing and paying the prize to get ahead. Even with his destitution and seemingly hopeless situation, he was optimistic. He didnâ€™t only hope and pray that his situation would be transformed. He knew he had to work hard to achieve his dreams. But much more than applying himself to the process, he had what Malcolm Gladwell, calls an â€œarbitrary advantage.â€

And with SMART Liberiaâ€™s support, he submitted his applications, went through the interviews and was selected as one of the two students in Liberia amongst thousands of students across Africa to join the Academyâ€™s class of 2016. The two Liberian Students with their class mates at ALA Campus

Mustapha is already on campus in South Africa, and depending on how well he performs and subjects himself to the rigorous nature of his new academic environment, he might just gain admission to Harvard to continue his studies after two years. Many ALA graduates go on to some of the worldâ€™s most prestigious institutions after their two years in Johannesburg.

In a country where there are so many barriers to success, where people easily give up on their dreams and squarely blame the establishment for everything–even their own inactions– itâ€™s hard to find students like Mustapha who are willing to fight against the terrible odds.

Therefore, as an organization dedicated to harnessing the potential of every Liberian child and developing a generation that will lift Liberia into a prosperous future, we launched a search for the most promising Liberian students who have demonstrated academic excellence and service leadership abilities in July through the Lift Liberia Scholars Program.

On September 19th, we welcomed our inaugural class after a rigorous admissions process. Our inaugural class consists of seven of Liberiaâ€™s most promising students. Over the next years, we will immerse these high achievingâ€”and high potentialâ€” young students into a pre-college preparatory program where they will acquire the skills to lead change across Liberia. Our class consists of young people, who â€“ like former US President John F. Kennedy â€“ have asked what they can do for their country, and who â€“ like President Ellen Johnson Sirleaf â€“ have dreams that exceed their current capacity to achieve them.

We have young people ready to use their education for the public good.

Our Education Advancement classes prepare our students for success on international aptitude tests and with the skills to succeed in college. We prepare them to compete for international scholarships like students at African Leadership Academy and Bridge2 Rwanda.

Our scholars learn the basics of entrepreneurship and leadership. We train them to solve problems in their communities and take initiatives. By graduation, they will implement a community service project that creates a meaningful impact.

With rising unemployment and competitive job markets, it is crucial that students are learning relevant hard and soft skills to meet the demands of employers. Through team activities, resume workshops, interview tips, etc., our students will gain a greater depth of relevant skills for employment even before they enter college.

Our students will gain a deeper understanding and appreciation for different ideas, cultures, and traditions around the world through guest lectures, reading clubs, TED Talks, and other exposures to global thought leaders. They will read the news, journals and other material that will expose them to major global happenings.

One of our founding beliefs is that for Liberia to develop, we need a generation of leaders that are well-educated, entrepreneurial, passionate, values-driven and with the right networks to drive change across Liberia. As one of my friends wrote recently, â€œLiberiaâ€™s future banks on a new breed of youth leaders.â€

But how do we get these leaders? Do we just hope that they will emerge by chance? No! Like Fred Swaniker, the founder of ALA and African Leadership University, â€œItâ€™s too important an issue for us to leave it to chance.â€

We must create and support institutions that will identify these promising leaders in a systematic way and empower them with practical skills to solve Liberiaâ€™s most pressing issues.

This is our bold vision to lift Liberia into a prosperous future.