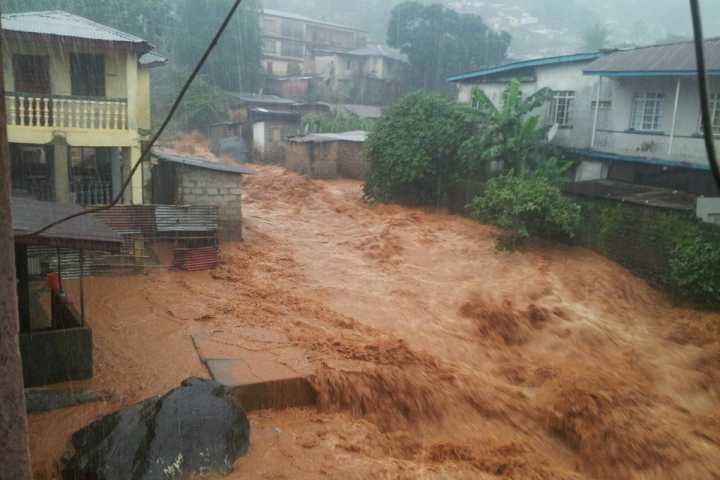 Hundreds were killed and thousands were displaced from their homes last week outside of Freetown, Sierra Leone following a massive mudslide.Â  Liberiaâ€™s President Ellen Johnson Sirleaf briefly visited Sierra Leone to attend the burial of victims of the disaster.

Abdul Tejan-Cole, the Sierra Leonean head of the Open Society Initiative for West Africa, tweeted that the tragedy exposed â€œbad planning and lack of a national emergency management system.â€

Lansana Gberie, a Sierra Leonean who served on the UN Panel of Experts for Liberia, penned a critical op-ed noting that the disaster was enabled by government neglect.

My social media timelines have contained both declarations of mourning and worried sentiments expressing concern that Monrovia, which has also experienced a post-war population surge accompanied by limited planning and which has a rainy climate resembling Freetownâ€™s, is susceptible to a similar disaster.

As I reviewed the posts debating the potential lessons of the Freetown tragedy for Monrovia, references to Ebola and the failed West Point quarantine appeared.Â  However, my mind turns to the 2015 Monrovia city beautification exercise carried out by a presidential task force led by Mary Broh, who currently heads the General Services Agency.

With vast sections of the city susceptible to erosion and the existence of entire communities of informal settlements, the sporadic, seemingly random destruction of a small number of the unauthorized structures around Monrovia seemed a curious and ineffective way to â€˜beautifyâ€™ the city.

In some ways, it resembled a much larger initiative in Harare, Zimbabwe in 2005 known as Operation Restore Order (or Operation Murambatsvina), which received widespread condemnation (a UN report was highly critical of the initiative).

Like the Zimbabwean operation, the Monrovia exercise seemed to materialize with little advance warning. Travelling around Jallah Town and Tubman Boulevard in advance of the Christmas season, it was hard for a resident of Monrovia to miss the task force in action.

In practice, the â€˜beautificationâ€™ looked like the wanton destruction of homes and livelihoods.Â  In what seemed to be a generous interpretation of the task force’s mandate, a number of individuals were seemingly detained by Mary Broh and her subordinates for various alleged crimes.

Not long into the campaign, this diversion looked like it would backfire on Broh. Childrenâ€™s right advocates criticized her for allegedly whipping and parading individuals who were purported to be child prostitutes. The laborers carrying out the exercise appeared to be recruited solely for that purpose with no specialized training â€“ an assessment reinforced by their subsequent protest against Broh over pay issues toward the end of December when the task force had concluded its work.

However, unlike the Zimbabwe operation, the Monrovia beautification exercise received barely any international attention (I saw just one well-written but belated piece). The Bush Chicken published a critical op-ed, and US-based Liberian journalists called for the task force to be disbanded, but Broh didnâ€™t seem to endure as much criticism for the â€˜beautificationâ€™ process as she had for actions when serving as Monroviaâ€™s acting mayor.

The task force certainly received nothing like the condemnation that has been directed to Partnership Schools for Liberia, another case of the government, enabled by the international community, abdicating its mandate.

When I look at the very generous support the international community has directed to President Sirleaf, capped by the award of the Nobel Peace Prize, and see simplistic propaganda from the current crop of presidential candidates about the number of school fees theyâ€™ve paid and generators donated, it seems that from both Liberiaâ€™s international supporters and local political elite, there is no investment in long-term solutions.

One can only wonder if the 2015 beautification project was genuinely conceived as part of a long-term strategic solution to the challenges facing Monroviaâ€™s immense post-war growth.Â  It seems unlikely that anyone today would point to it as an example of the government taking the sort of serious steps necessary to prevent something like the Freetown tragedy.

With the impending national election and new incoming administration, both the Liberian electorate and international donors have an opportunity to embark on a different path. This requires focused dialogue and planning that need a sustained effort, not meandering superficial actions motivated by fuzzy political calculations.