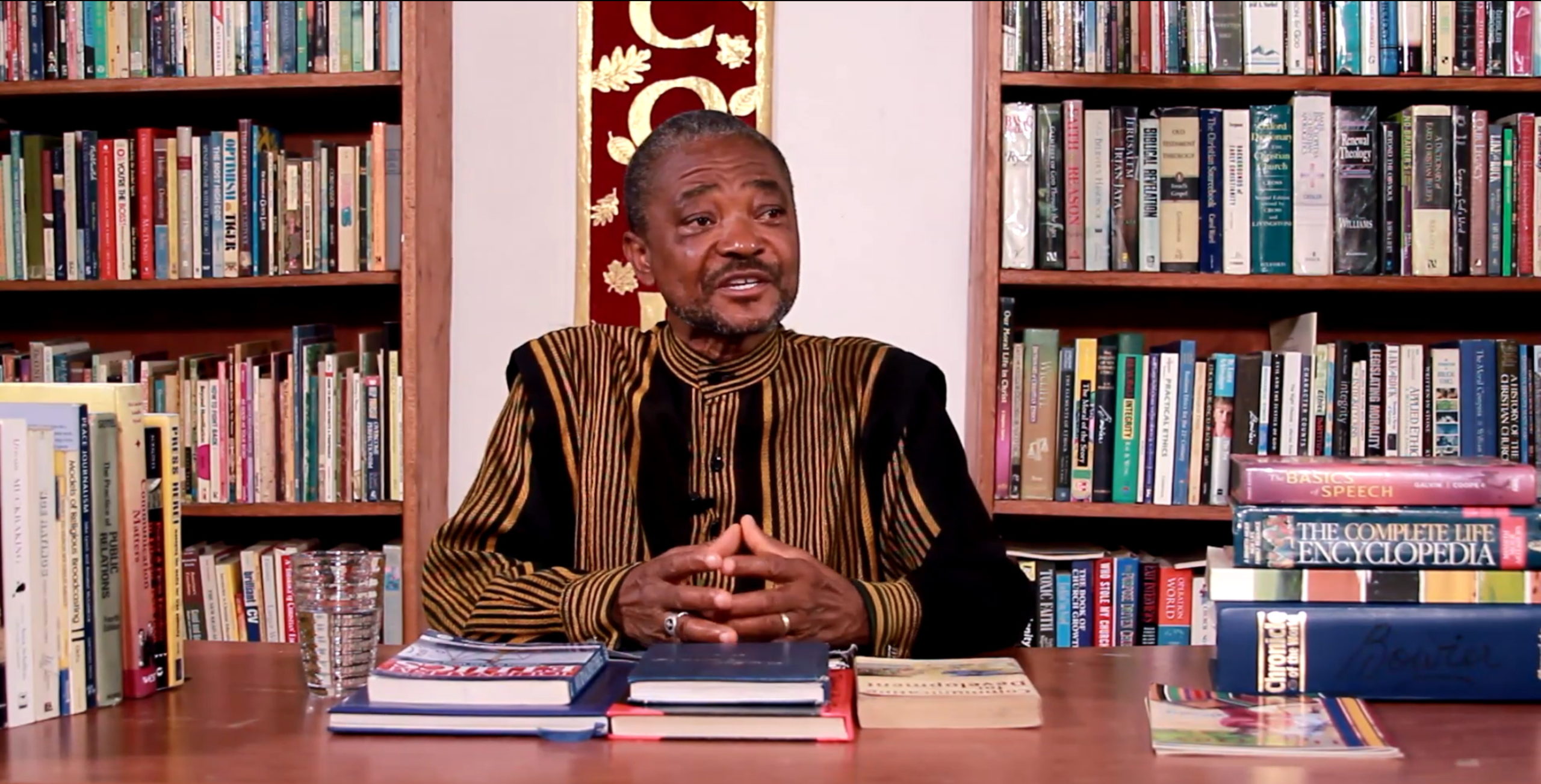 I recall a former Liberian cabinet minister telling me several years ago that Rev. J. Emmanuel Bowier (who passed away on June 27 at the age of 71) had a tendency to place himself at the center of much of Liberia’s political drama and intrigue.

This was true. Speaking before the Truth and Reconciliation Commission in 2008, Bowier stated, “I was at the center of April 14 [1979 rice riots]” and subsequently added, “There is nothing important that happened here [Liberia] that I can’t tell you about.”

An announcement of Bowier’s death by Front Page Africa noted a recent declaration where he claimed that he would become Liberian president at the age of 80. Indeed, Bowier was rarely without opinions or insights on matters pertaining to Liberian culture, history, and politics.

With his passing, an invaluable repository of Liberian knowledge is no more.

I came to know Bowier in my quest to gain insights on these issues as an American expatriate resident in Liberia from 2014–16. I worked in the governance sphere and regularly wrote on Liberian history and politics.

Bowier’s quotes and contextual information frequently appeared in my writing, although I only wrote one piece in which he was a central protagonist.

I was not yet a trained historian at the time that I came to know him. However, in our numerous discussions, Bowier’s storytelling and oratory were so compelling that I never doubted his accounts or how he positioned himself.

Bowier’s power of recollection was tremendous. It was undoubtedly assisted by his tendency to keep notes and preserve papers. He did not publish much – at least later in life, earlier in his career he had been an editor and contributor to The New Liberian newspaper – but he diffused his knowledge in a myriad of other ways.

A host of scholarly works cite interviews with Bowier. He educated visiting foreign executives, giving them tours of Providence Island, the National Museum, and points of interest in central Monrovia. More substantively, he educated Liberians, via radio appearances and his lectures at the Foreign Service Institute and to graduate students at the University of Liberia.

As best as I can recall, I first learned about Bowier’s existence, not at the grassroots level, but when reading Little Liberia, an engrossing account of the Liberian diaspora in New York by a white South African, Jonny Steinberg. An interview with Bowier appeared in the work and I was immediately drawn to the reverend’s keen grasp of historical knowledge.

I asked around about Bowier and discovered that he was widely known for his radio appearances (I never got to hear him over that medium, although a number of his shows from around 2016 are available on SoundCloud).

Before long, we connected over the phone and Bowier invited me to visit his ‘Garden of Peace’ compound in Sinkor. I recall him saying that he was able to build the residence due to being frugal with per diem allowances granted for his international travel.

The name of Bowier’s leafy residence was well deserved. It was an oasis of tranquility and calm (despite the presence of an artillery shell hanging off the house as a reminder of the war). There also seemed to be sea breeze that I could not detect outside of the gates (his residence was on the land side of Tubman Blvd). He was always very happy to speak to me at length (brevity was certainly not his style).

I suspect these interactions, although I never made a direct connection at the time, inspired me to return to academia full-time and pursue a doctorate. Bowier would frequently interrupt our conversations (invariably held outdoors under the shade) to retrieve a book or document from his library that he wanted to show me to substantiate a point.

These encounters were a priceless education. I recorded a number of our conversations. Upon learning of his passing, I sought to listen to them. I was devastated to discover that the device I’d saved them on would not boot up (if I had my historian’s training at the time, I surely would have had these backed up in multiple places).

Bowier’s power of recall was so strong, that in our discussions we primarily focused on his childhood. This even included the circumstances and intrigue surrounding his conception and birth!

We rarely ventured much into his adulthood because these childhood memories were so vivid. I recall being fascinated to learn that one of his grandmothers hailed from what is now Namibia. She was apparently called a ‘white lady’ on account of her fair complexion.

He was deeply attached to his father, who died in the mid-1970s at roughly the same age the younger Bowier was at the time of his recent passing. I recall Bowier commenting that he was so distraught by his father’s death, that it delayed the formal completion of his studies at the University of Liberia.

Bowier frequently attributed nuggets of wisdom in his speech to his father and noted that his father was responsible for his determination to pursue political reform from within established governance structures.

The elder Bowier was a long-serving True Whig Party functionary who held a number of posts across the county, culminating as a member of the House of Representatives for River Cess (where Bowier spent much of his childhood) during both the Tubman and Tolbert administrations.

At the time of the 1980 coup, Bowier was a 30-year-old mid-level TWP functionary, having held posts in the Ministries of Education and Information.  He continued to serve the Government of Liberia following the tumultuous transition from Tolbert to Doe.

In a brief online exchange with a professionally trained historian following Bowier’s passing, the individual referred to Bowier as an ‘apologist’ for Samuel Doe’s regime.  I am not sure if this is fair, although it is probably not an isolated view.

Bowier reached what was arguably the peak of his career as Doe’s Minister of Information from 1987 – 1990.

He was tapped for the position after impressing Doe with his blunt criticism of U.S. officials and their hypocritical Africa policy while serving as spokesperson for the Liberian Embassy in Washington DC (amusingly, the name of the ambassador during much of his tenure was George Washington).  When Bowier first arrived in the US around 1983, the relations between the two countries were fairly strong, but progressively soured.

Bowier maintained that his strong remarks against American officials were actually a form of transferred aggression, as he had been upset with the Doe regime for failing to disburse his salary for several months.

Bowier noted that Doe promoted him to Minister, as the Liberian head of state was worried that Bowier would be declared persona non grata by the US for his frank remarks (ironically, Bowier’s ministerial predecessor was visiting the US when his promotion was announced).

Curiously, in my article on Samuel Doe’s lingering legacy on Liberian politics, I do not seem to have included any commentary from Bowier.

I do recall Bowier speaking to me about his fear of returning to Liberia from Freetown around July 1990, where Doe had dispatched him to pursue peace talks.  Bowier broke with Doe at that time (admittedly rather late in the day) and called on the head of state to step down. Bowier thereafter spent most of the war in the USA, pursuing studies in theology and counselling.

The FPA announcement of Bowier’s passing described him as “fiery.”

The Reverend I knew was a candid, but relatively soft-spoken conciliator.  This, coupled with his loquacious manner of speech, often made him seem cool and calculated.  From my rather limited experience, he was generally quite diplomatic.

As I was getting to know him, Bowier made headlines for his appointment by President Sirleaf to the Board of Directors of the National Port Authority.  He was removed almost as quickly.

He told me that he only sat in on one meeting before his dismissal was announced.  When I tried to draw him out on what he saw as the reasons for this, he was evasive, simply noting that apart from introductions, he was quiet throughout the board meeting.  I read between the lines to detect an implication that he saw little justification for his removal.

I did, however, see a side of his outspoken tendencies in an address to the Press Union of Liberia where Bowier upbraided Liberian journalists for failing to properly leverage their power to transform Liberian society.

One memorable occasion where I was impressed by Bowier’s prodigious memory was when I mentioned stumbling across an issue of a newspaper that featured a poem, ‘Refuge’, that he had composed in the 1970s.  Bowier was able to immediately recite the poem line for line.

Let our eyes be ever lifted

In observance of your presence.

Make us humble day by day;

Guard the weak against the strong.

Lead us in your righteousness.

Sharing
Tags Emmanuel Bowier
Contributions to The Bush Chicken are not tax deductible.