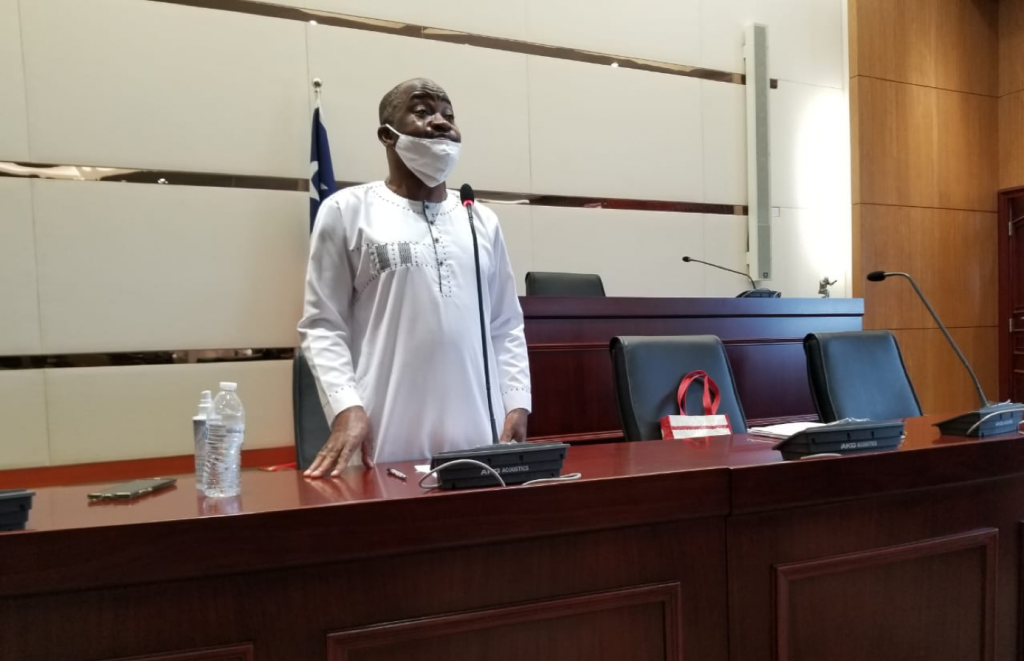 MONROVIA, Montserrado – In a surprising twist, the Senate’s Committee on Foreign Affairs has recommended that the controversial foreign minister-designate, Dee-Maxwell Kemayah, be confirmed by the Senate.

On September 29 the committee issued its recommendation even though it had yet to launch an investigation it promised over an allegation of sexual assault against Kemayah.

Instead, the committee asked both parties to take the matter before the courts, which it called a more appropriate venue, given that the committee is not equipped to handle such investigation.

In its recommendation, the committee noted that confirmation hearings were meant to be administrative in nature, as provided by the constitution.

“There is a thin line between the Legislature and the Judiciary branch of government and as much as it takes sexual harassment grave, the allegation needs full and detailed investigation,” the body stated.

Meanwhile, the Senate committee said it found Kemayah fit and suitable “except on the allegation of sexual harassment.”

The committee said, after legal consultations, it decided to avoid conducting any hearing via social media, which would not allow the accuser to be sworn under oath as the accused has been.

“Putting one party under oath with the risk of perjury will be a crime under the legislature and will render this investigation pre-judiciary to the accused,” the committee wrote.

After the committee made its decision, Grand Bassa’s Nyonblee Karnga-Lawrence, the sole woman in the Senate and a member of the Foreign Affairs Committee, called the decision “very disappointing and embarrassing.” On her Facebook page, she noted that she had not signed the committee’s statement and voted against the decision to recommend Kemayah for confirmation.

After his appointment by Pres. George Weah, a staff member at the Liberia Permanent Mission to the United Nations in New York, Wynee Cummings Wilson, filed a sexual harassment complaint against Kemayah.

The allegation of sexual harassment against Liberia’s permanent representative to the U.N. and foreign minister-designate came just a week after President Weah declared rape and other sexual violence crimes as a national emergency.

On September 21, the Senate’s Foreign Affairs Committee had decided to halt Kemayah’s confirmation hearings to further investigate Cummings’ allegation. However, on September 25, the committee resumed the hearing, where Kemayah was allowed to defend himself against the accusation.

The foreign minister-designate told senators that he was the victim of a “takedown campaign.”

“We are aware that globally, there are false allegations that have come against world leaders, but I don’t fear that my integrity is being questioned,” he said.

“What I fear – and all I can say – is that this is a sad day for our country, this is a smear campaign before even my nomination when it was speculated that I would be preferred for this position of foreign minister. This is a takedown campaign; this is not about my integrity – my integrity remains well respected even at the level of the U.N. We are one of the champions on women’s issues at the U.N. Awareness is being created at the U.N. to inform people that these things occurred mainly for political reasons.”

In a press conference later that day, Sinoe’s Sen. Milton Teahjay appealed to Cummings, the accuser, to come forward to help the Senate investigate her claims.

However, less than one working day after noting the difficulty in reaching Cummings, the Foreign Affairs Committee recommended Kemayah’s confirmation. The decision of the president to refuse to rescind Kemayah’s appointment and the Senate’s resolution to confirm him may lead many activists to question the government’s willingness to take action against sexual and gender-based violence, especially when the accused is an important political figure.

Sharing
Tags Dee-Maxwell Kemayah
Contributions to The Bush Chicken are not tax deductible.