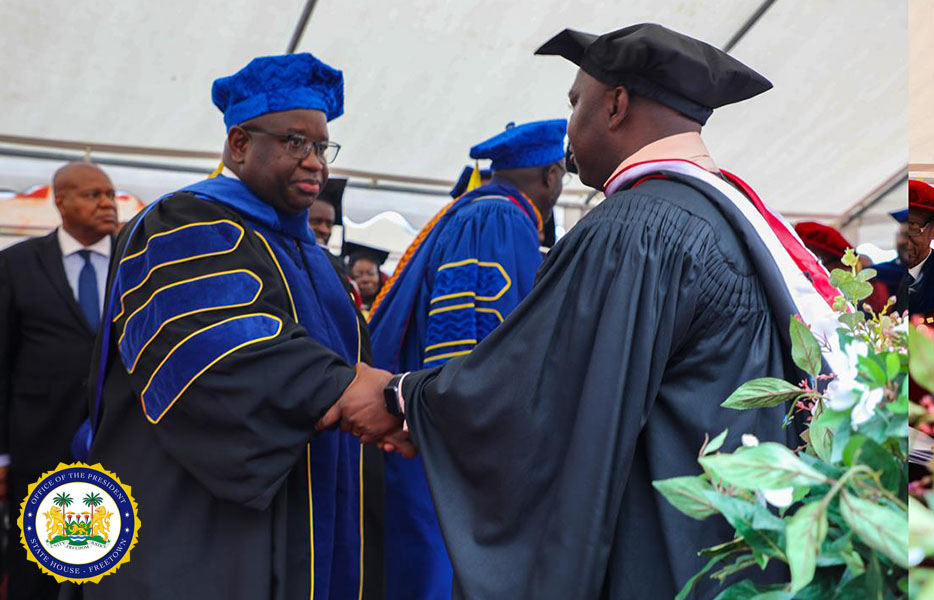 Speaking at the convocation, which was held at the Samuel Kanyon Doe Sports Complex in Paynesville, the president of Sierra Leone, Julius Maada Woni Bio, thanked the University of Liberia for inviting him as the keynote speaker and conferring an honorary doctorate degree on him.

â€œI am sure my fellow honorees will not mind my assuming the liberty to thank the university for their generosity and consideration and to say that from now and forever, we are proud University of Liberia alumni,â€ he said.

Exactly 100 convocations and 157 years of illustrious history, the University of Liberia has produced statesmen, politicians, diplomats, jurists, attorneys, soldiers, police officers, and many other professional men and women. Founded in 1862 as Liberia College, the institution converted to a university in 1951 and began a legacy of liberal arts education as the oldest institution of higher learning in West Africa, second only to Fourah Bay University in Sierra Leone, which was founded in 1827.

Bio also thanked President George Weah for the usual warm fraternal welcome and generous hospitality accorded him and his delegation since their arrival in Liberia.

He noted further, â€œLiberia and Sierra Leone share a common, unbreakable, and continuous demographic, historical, cultural, and academic heritage. We have always had close relations, forged even closer economic and other ties through the founding of the Mano River Union and we were founding members of ECOWAS. We have heightened cooperation between our two nations and we are now connecting physical infrastructure through a major highway and the CLSG power line. The Africa Continental Free Trade Agreement opens up more possibilities of trade.â€

â€œIf the A.U. is strong today and Africans are united by their shared aspirations, it is because a great Liberian statesman, President William V.S. Tubman, met with his brother Presidents Kwame Nkrumah and Sekou Toure in the town of Sanniquelle, Liberia between July 15 and 19, 1959,â€ he added.

In invoking the former president Tubmanâ€™s legacy, Bio sought to highlight the pivotal role Liberia played in cementing African unity following European colonial exit from Africa in the beginning in the 1950s and 60s. Tubman was a staunch supporter of the fight against colonialism and apartheid, providing refuge and giving succor for anti-colonial activists, including Nigeriaâ€™s first President, Dr. NnamdiÂ  Azikiwe. Liberia was also the first black African country to serve on the U.N. Security Council, Bio recounted.

He continued: â€œYour generation must make education fit for purpose in the 21st century. As one of my friends, an elderly statesman remarked, â€˜Africans slept soundly while the first, second, and third industrial revolutions happened in Europe and Africa was at the receiving end.â€™â€

He noted that only through quality education, technology, entrepreneurship, an expanding economy, and a commitment to fair and equitable distribution of resources and social capital could political governance in Liberia be firmly anchored.

The new generation of national leaders Liberia so desperately needs may have well been seated in the audience at this Centennial Convocation of West Africaâ€™s second-oldest university.

Featured photo by the Office of the President of Sierra Leone