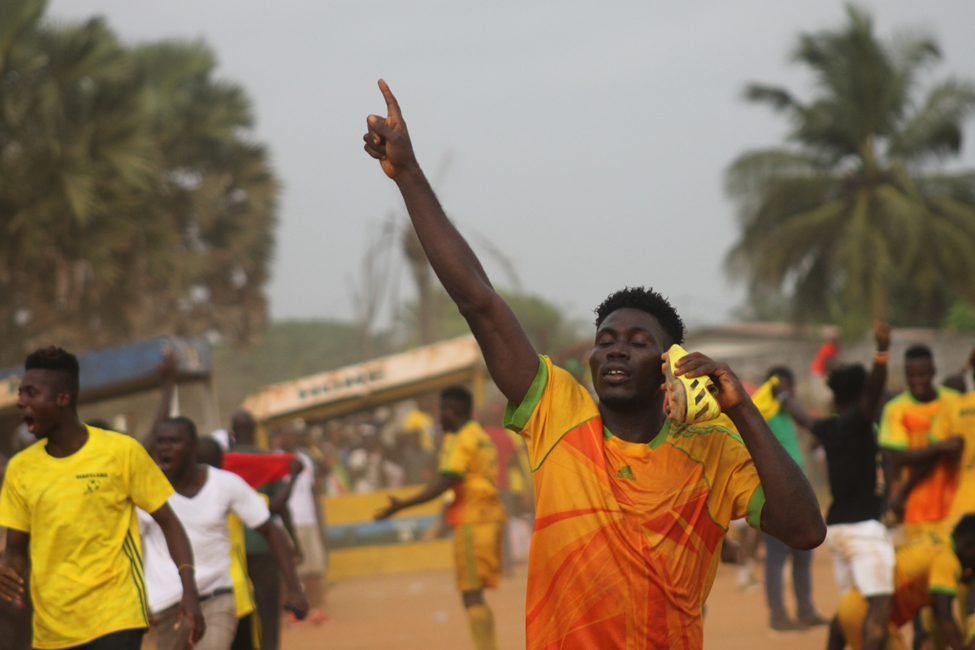 MONROVIA, Montserrado – The 2019-2020 National County Sports Meet games will move to the Samuel Kanyon Doe Sports Complex this Saturday following the completion of the group stage of the competition.

The annual competition has now reached its quarterfinals stage, with some of the favorites to win the football competition eliminated.

One of the biggest surprises in this year’s competition came in Group A, which was hosted in Grand Bassa. For the third consecutive time, host Grand Bassa drew and got eliminated from the competition in the group stage.

Following their draws with Margibi and River Cess, Grand Bassa’s football team needed a compulsory win against Sinoe to progress to the quarterfinals. However, they were held in a goalless draw that got them eliminated. Sinoe progressed with four points from three games, while River Cess also progressed to the quarterfinals for the first time in 10 years, finishing as group leaders with five points, behind Sinoe’s four points.

The Group A hosts were eliminated along with Margibi, one of the favorites to lift the football championship. Margibi lost their opening game to Sinoe before picking up two draws against Grand Bassa and River Cess. They bowed out of the competition as the bottom team in Group A, exiting with two points from three games.

The group’s final results of the kickball category were the opposite of the football results. While the River Cess and Sinoe football teams were celebrating their progress to the quarterfinals, their kickball teams saw the end of their journey as Grand Bassa and Margibi got the quarterfinal spots in the category.

In Group A’s football matches, Nimba secured a spot among the last eight as they went on to win 1-0 against Bong on the final match day. The Mountaineers were on the verge of missing out a quarterfinal spot following their defeat to Lofa and Bong’s 1-1 draw with Lofa. With Bong’s draw with Lofa, they needed at least a draw with Nimba to qualify to the quarterfinals, but Nimba needed a win to reach the last eight.

Despite having the least arduous task to accomplish, Bong could not hold Nimba to a draw. The Mountaineers finished second in Group B with three points, one behind leaders Lofa.

Group C hosts Maryland needed a win on the final day to reach the quarterfinals in football. The Marylanders gifted their fans with a 2-1 win over Grand Gedeh on the final day of group games to finish on top of the group with seven points. It all appeared like it was the end of Maryland’s journey when Grand Gedeh took the lead through Dembo Nah. But Willie Jones leveled for Maryland before the break, as both teams ended the first half with a goal apiece.

Grand Gedeh held to the 1-1 scoreline until the 87th minute when Prince Williams headed in the ball to put Maryland ahead at the Martha Tubman Stadium in Harper. Williams’ goal set the stadium ablaze and put Grand Gedeh’s hope of qualifying in doubt. With four points from two games, Grand Gedeh was relying on upon already eliminated River Gee to get a win or draw against Grand Kru that needed a win to qualify and end Grand Gedeh’s hope. The result didn’t go Grand Gedeh’s way, as Grand Kru grabbed a 2-0 win over River Gee to move up second in Group C with five points.

The entire 2019-2020 National County Sports Meet was a disappointment for Grand Gedeh fans who saw both their football and kickball teams eliminated in the group stage. The Gedeh kickball team failed to reach the quarterfinals despite a 6-5 win over Maryland on the final day of group games.

Like Group A hosts that failed to reach the football quarterfinals, Group D hosts Grand Cape Mount didn’t qualify despite playing at home. In three games, they managed a draw and suffered two defeats including on the final day of group games’ defeat to Montserrado.

Two-time champions Montserrado got their first three points of the tournament with a win over Grand Cape Mount, but failed to advance to the quarterfinals, following Bomi’s win over Gbarpolu in Group D’s last game.

Bomi’s 1-0 win over Gbarpolu helped them continue their football championship title defense as they finished second with five points.

In kickball, Bomi joined Montserrado in reaching the quarterfinals, while there were no places for Grand Cape Mount and Gbarpolu that got eliminated.

The tournament will resume on Saturday, January 18, with the quarterfinals game at the Samuel Kanyon Doe Sports Complex in Paynesville.

The quarterfinals game will take a break on Sunday and resume on Monday with Lofa playing Bomi in the day’s first kickball match at 1:00 p.m. before Montserrado plays Bong’s kickball team in the last kickball quarterfinal game at 2:00 p.m.

In the last football game of the quarterfinals, Nimba will be hoping to reach the final four when they battle underdog Gbarpolu, who like Lofa, was seen as an underdog until they sent out warnings by qualifying after match day two. The team topped Group D with six points, while their opponents, Nimba, needed a win on the final day of group games to qualify.