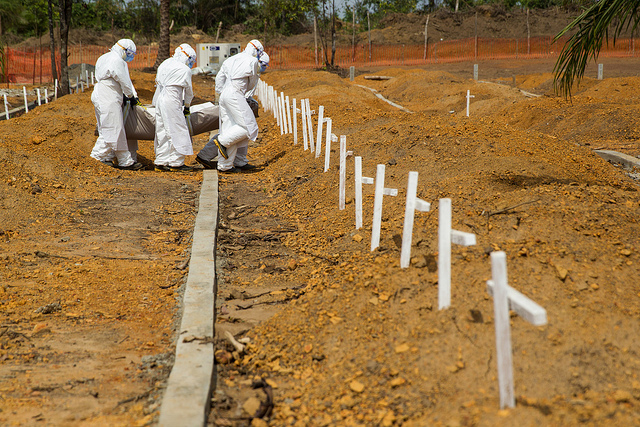 Like a wildfire, Ebola spread from Nzerekore, a remote area of south-eastern Guinea to the capital, Conakry, and then bordering Liberia and Sierra Leone. Kindled with desolation, the killer did not discriminate; it affected the young and old, the rich and poor, the secular and religious.

“The level of outbreak is beyond anything we’ve seen or even imagined,” said Dr. Tom Frieden, the Director of the Centers for Disease Control and Prevention. As the crisis escalated, health systems shattered. Reports of overwhelmed facilities and health workers dying flooded the news cycle. “We didn’t know what to do, and we didn’t know how to respond,” President Ellen Johnson Sirleaf recalled during an interview at York College in New York City. “It was a strange unknown enemy.”

Frieden warned, “There is still a window of opportunity to tamp it down, but that window is closing.”

Meanwhile, in Liberia, Gray D. Zawu had lost his sister and her unborn child to Ebola. His sister was a nurse and contracted the virus while caring for patients. Her morning sickness, vomiting, and fever were misdiagnosed as symptoms of regular pregnancy rather than Ebola. Unfortunately, by the time the virus was identified, it was too late.

After his tragic loss, Zawu resolved to make a difference. “I was directly affected by Ebola in this way, but I had to put myself together and see how best we can give back to the country at large,” Zawu said.

An opportunity came knocking when the Ebola burial teams, now known as the Dead Body Management Teams, started recruiting. The burial teams have the critical task of burying Ebola’s victims because their bodies contain a high viral load. Those who come into contact with the body’s fluids are at the greatest risk of catching the disease. For Zawu, it was a chance to fight the disease directly. And more than that, it was the right thing to do, a chance to help families that were affected the way he was, regardless of his fear.

“Of course, I was scared,” said Zawu. “Everyone was afraid because we didn’t even know how people were getting this stuff. It was like one day this person gets it, and we cannot even trace where it came from.”

Similarly, Emmanuel T. Flomo, a member of the DBMT Pipeline was anxious to help when he heard that the Ministry of Health was recruiting. “I came to save my country because we all can’t abandon our country,” he said.

For Anthony V. P. Cole, another member of the DBMT Pipeline, helping was an obligation but with a caveat. When he joined the team, he told his mother that “our country comes first before ourselves.” Further, he explained that there are people left that need saving. However, he would appreciate the compensation. “Nothing for nothing in the first place because we have to do something to get something,” he said. “I will not help the country without getting any benefits.” Cole makes US$500 a month for his work, a wage that is certainly above the average.

While rewarding, working in the burial teams is dangerous, and those who are involved tend to be dreaded and ostracized by their families and communities.

“Yes, my family can be scared of me,” John Saah, a driver in the DBMT Pipeline, said. “They feel that I’m not supposed to be doing anything near Ebola. But I told them I will do it because I need to help my country too.”

Zawu says that at first, it was difficult, particularly because of the stigma.

“Other people don’t want to affiliate with you because they feel you are in close contact with Ebola,” he said. “Even the financial people in my office were also stigmatized because of the name Ebola attached to them. It was difficult at the beginning, but now we have gone through worse, having seen actual victims, we know the kind of help we are rendering. So it’s bigger than the stigma for me. I train as many teams as I can train so we don’t have bodies lying in the streets of Monrovia.”

The burial team shared concerns that echoed the immortal question by John E. Lewis, “If not us, then who? If not now, then when?”

Zawu went on to train 75 to 80 teams around Liberia, particularly in the counties that were seriously affected like Bong, Nimba, and Lofa.

“We had to go hard to reach places just to train teams around the country not to have bodies lying around the streets,” Zawu said.

“We do safe burials,” said Cole. “When there are bodies that nobody wants to claim we bury them. We call them street bodies. We do the swab and when there is no virus found we take the bodies to the government land.”

The burial team continued their work relentlessly until May 9, 2015, when the outbreak was declared over. It was a big win for the burial team and more importantly, Liberia.

Many would agree that it was not a vaccine or a test drug that stopped the killer virus. It was people like Zawu, Flomo, Cole, and Saah who used a small window of opportunity to pull together with moral courage to save their communities.

“Magnificent! Magnificent!” says Zawu, on how it feels to know that he helped end West Africa’s first Ebola outbreak.

The virus that keeps on coming

According to Zawu, the burial team was not highly recognized for their work, at least, not by the government.

But that is okay. “Most of us are not doing this for recognition but for the sake of Liberia and our loved ones,” he said. “See how best we can return to a calm state.”

For that reason, even if the virus continues to present itself, we can, at least, be hopeful that this time it will be different. The DBMT is ready and vigilant. Currently, there are four active teams in Montserrado with one on standby.

Lloyd Massah contributed to this article.