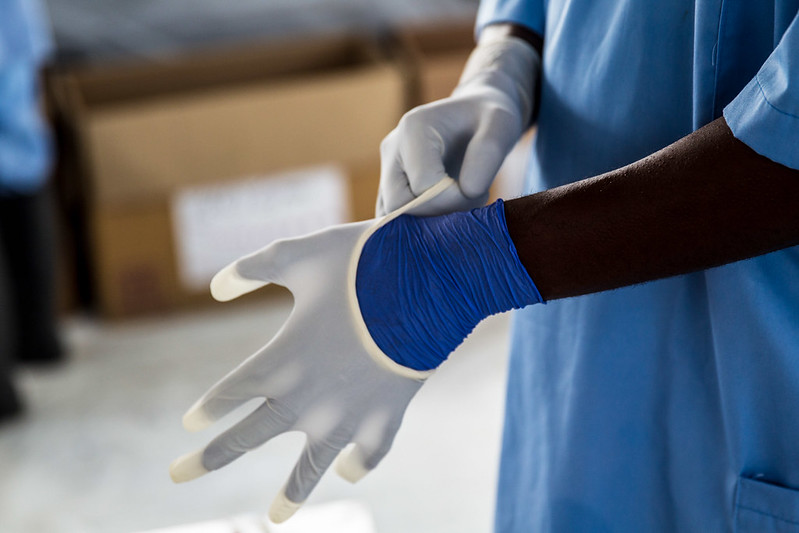 MONROVIA, Montserrado – On the day a suspected Ebola patient was being treated at Redemption Hospital, the New Kru Town-based facility lacked essential personal protective equipment such as masks and gloves, according to conversations with at least two staff members there.

Insufficient operational funds are nothing new at public health facilities across Liberia; however, the resurgence of the Ebola virus in Guinea raised concerns among some of Redemption’s staff that limited PPEs could leave them vulnerable. According to a research paper published in the global health journal, The Lancet, Liberia lost 8.07 percent of its doctors, nurses, and midwives during the 2014 Ebola pandemic. This compared with 6.85 percent in Sierra Leone and 1.45 percent in Guinea.

During a Senate hearing on February 18, Health Ministry Wilhelmina Jallah told Liberians that a suspected case of Ebola was being treated at Redemption Hospital. The patient had crossed into Liberia on February 12 from a region of Guinea for which the Guinean government had declared an Ebola epidemic on February 14.

Jallah said national health officials had been immediately contacted about the patient once they learned of her symptoms and she was taken to an isolation center located within the Redemption Hospital yard. She portrayed confidence that health authorities were taking the necessary steps to detect and contain any spread of the virus.

“The samples need to go through sequencing,” she said. “The result will be out by the evening or night hours and the public will be duly informed about the outcome.”

The results eventually returned negative for Ebola. However, some staff at the facility later alerted The Bush Chicken to a depleted supply of personal protective equipment they feared could make it difficult to contain such a highly contagious disease in the future, especially in the presence of the COVID-19 pandemic.

One Redemption staff who spoke extensively said the hospital had run out of gloves for the past two months. As a result, the staff, who spoke on condition of anonymity for fear of retribution, said patients’ families are asked to purchase gloves to provide to health workers before any examination can take place.

The health worker expressed concern that such a practice could allow for the possibility of contaminated gloves being provided to health workers.

“It becomes pathetic and embarrassing for health practitioners at Redemption not to examine patients because of the lack of medical supplies,” the staff added.

“The lack of masks and gloves at Redemption is hampering the operation of healthcare workers.”

The hospital, which serves an average of 11,000 patients a month, is mandated to provide health services for free, as are most public health facilities in the country. Therefore, Redemption must depend on external sources of funding, instead of obtaining funding from patients. According to the staff, the Ministry of Health’s Central Medicine Store supplies the hospital on a quarterly basis with masks, gloves, and other essential health materials. Samaritan’s Purse and the German development agency GIZ also provide some assistance to the facility, the staff added. In addition, Redemption also receives funds through a performance-based financing scheme organized by the World Bank.

“Even though the government makes allotments to the facility, it is insufficient to sustain the hospital,” the source said, noting that this shortage of funds can sometimes cause the hospital to run out of fuel for surgeries. “Patients are also constrained to purchase fuel for the facility generator before undergoing surgery.”

With the resurgence of the Ebola virus in neighboring Guinea, the source expressed fear that the situation could get worse for healthcare workers at the facility if the virus enters the country.

The Bush Chicken attempted to contact the hospital’s medical director on several occasions but to no avail. At a press briefing on February 26, the health minister acknowledged that “no system is perfect” when asked about the lack of gloves and masks for staff at Redemption. Jallah noted that Liberia’s neighbors, Sierra Leone and Guinea, were facing similar issues of limited supplies.

She accused the reporter of seeking negative stories, adding that she was optimistic that masks and gloves are available at the hospital.

“I visit Redemption and some health materials are there and not everything is out of stock,” she said.

“It is a very difficult situation because the gloves and other health materials are brought into the country from outside. There is a shortage of gloves on the world market, but at least the ones the ministry has are distributed to facilities upon request.”

The health minister added: “As we try to solve Liberia’s problems, all of us need to work together and stop looking for negative things to say.”