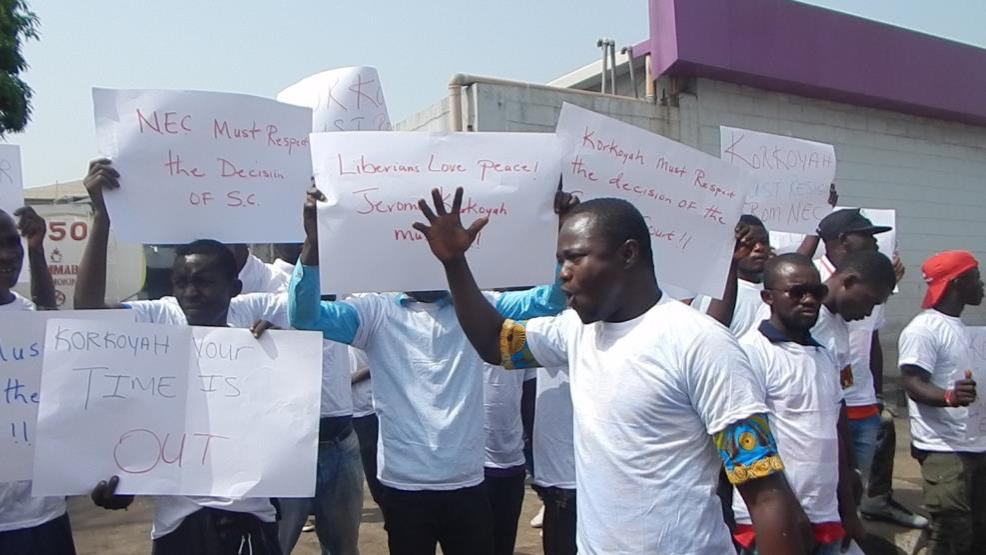 MONROVIA, Montserrado – A day after the announcement of the date for the presidential runoff election, four civil society organizations staged a peaceful protest at the National Elections Commission headquarters calling for Chairman Jerome Korkoya to resign immediately.

The organizations included the Progressive Thinkers, Movement Against Violence and Impunity in Africa, Citizens United to Serve Humanity, and the Movement for Justice in Liberia.

George Kailando, a Unity Party executive who spearheaded the protest, said they gathered in front of the commission’s headquarters to call on Korkoya to resign because the NEC chairman refused to abide by instructions from the Supreme Court.

“The court instructed the NEC chair to clean up the final voter registration roll before making any pronouncement of the presidential runoff election date,” he said.

Kailando said Korkoya refused to follow the court’s instructions when he went ahead and announced December 26 as the new date for the runoff election.

However, despite Kailando’s claims, while the Supreme Court’s final ruling mandated NEC to conduct a full clean-up of the final voter registration roll to have it comply with the elections law, the court did not direct NEC to clean up voter roll before announcing the date for the presidential runoff election.

Kailando also appealed to President Ellen Johnson Sirleaf to relieve Korkoya of his post as chair of NEC, pointing out that “the protest will be extended to the residence of Sirleaf in the coming days.” “We will continue to protest and sleep in front of the NEC headquarters until Korkoya resigns,” Kailando maintained.

John Pangbe, executive director of Progressive Thinkers, represented the group of protestors and read a statement saying that Korkoya had demonstrated gross incompetence when he announced that individuals whose names were not on the voter roll during the exhibition period would still be allowed to vote in the October 10 presidential and representatives elections. “It was a national embarrassment to allow several individuals to vote in the elections through an addendum listing though their names were not on the [final registration roll],” Pangbe said.

He added that NEC also “denied thousands of Liberians” their rights to vote because election materials arrived late at many polling places.

He pointed out that the NEC chair had also refused to listen to the complaints of aggrieved political parties at the close of the October 10 polls.

Ike Moore, national youth chairman of the All Liberian Party, said protestors are of the strongest conviction that Korkoya lacks authority to conduct the runoff election. “Korkoya has clearly demonstrated that he does not have the country at heart and as such, we are calling on him to step down,” Moore stressed.

Moore called on the European Union, ECOWAS, and the African Union to prevail on the NEC chair to step down in order for Liberia to forge ahead.