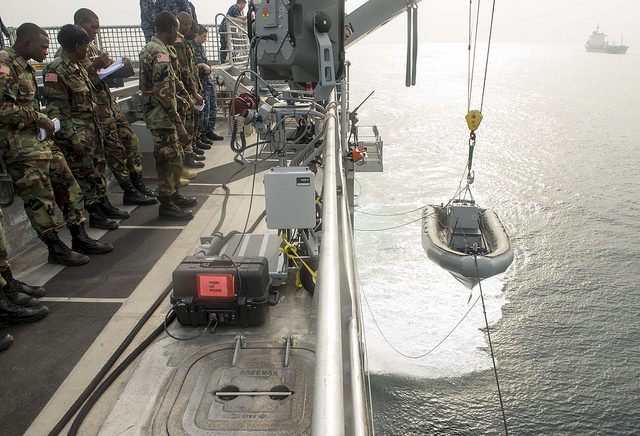 MONROVIA, Montserrado â€“ The Liberia Coast Guard has seized two foreign vessels after accusing its sailors of illegally treading on the countryâ€™s territorial waters without any prior notice.

David Dahn, assistant minister for public affairs at the Ministry of Defense, said the vessels were a Senegalese-flagged ship and one from China.

Providing details on the Senegalese vessel, Dahn explained that on February 3, officers of the Liberia Coast Guard, while on their normal patrol, spotted the Senegalese ship.

According to him, the officers quickly moved in and intercepted the vessel, which was without any automatic identification service, no maritime labor certificate, international sewage certificate, or vessel monitoring system.

Besides, Dahn said that the crew listing on the ship was incomplete, adding that â€œthree persons onboard the vessel were also undocumented and had no supporting identification document.â€

Dahn, who described the presence of the Senegalese vessel on Liberia territorial waters as worrisome, said none of the crew members had passports.

He added that officers of the coast guard were able to establish 1,795 cartons of assorted seafood were onboard the vessel.

Dahn further that while the investigation was ongoing with the Senegalese vessel, another Chinese ship was also arrested on February 7 for attempting to offload 139 tons of fish for sale in Monrovia.

When quizzed about the condition of the crew members arrested onboard on both vessels, Dahn said they are all doing well but did not state where they are being held.

â€œThe two vessels were not registered to operate in the country watersâ€, he said.

Dahn noted that authorities from the Ministries of Defense, Justice, and Agriculture are currently investigating the two vessels to determine the laws violated, stressing â€œthe appropriate fines will be leveled later.â€

He assured that full details would be made available to the public after a lengthy investigation.

When contacted for details on the investigation, Daku Mulbah, attorney general for Montserrado, referred inquiries to the Ministry of Justice.

Efforts to meet with Betty Lamie Blamo, Liberiaâ€™s solicitor general, failed after several attempts. But a Justice Ministry employee who only spoke on the basis of anonymity said theÂ investigation is ongoing and the institutions involved need more time before releasing any information to the public.

In 2015, the international environmental watchdog Greenpeace released a report that detailed hundreds of Chinese-owned and Chinese-flagged fishing vessels were taking advantage of weak enforcement by West African countries to illegally fish off those countriesâ€™ coast.

The report said those fishing vessels were using fishing methods that are damaging to the environment and decimates the population of fish. Some of those methods, it said, had even been banned in China.

The report had not mentioned Liberia as one of the countries where Greenpeace personnel observed the illegal fishing, but it said those activities occurred in waters in areas ranging from Sierra Leone to Mauritania.