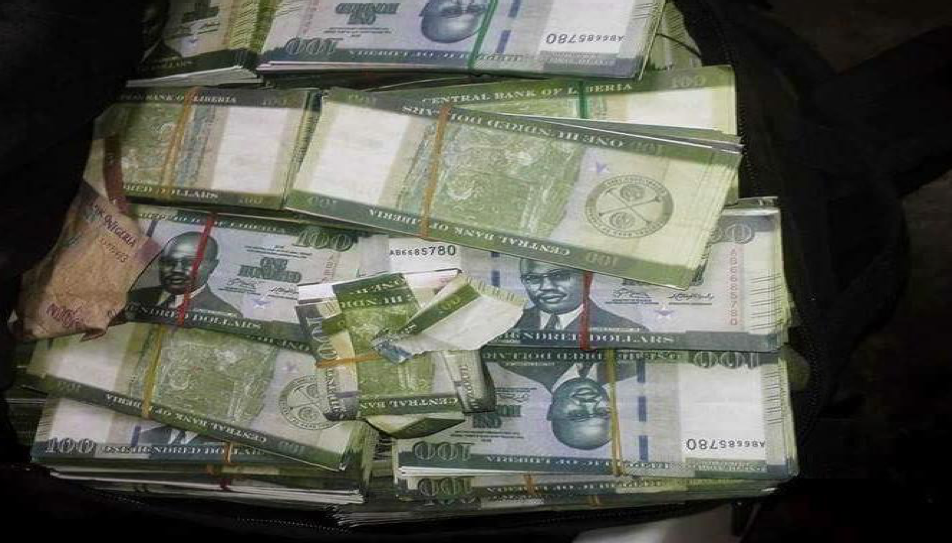 But the minister of information, Eugene Nagbe, was quick to deny any allegations that new money was printed by the administration.

Nagbe told FrontPage Africa â€œthe only thing that has been confirmed is the representative’s lack of comprehension of even the rudimentary elements of monetary matters.â€

According to the minister, the Central Bank was only issuing out to commercial banks unused Liberian dollar banknotes in its custody in the bankâ€™s vaults.

â€œThe bank puts out banknotes, used and unused, from time to time as a routine exercise to meet the liquidity needs of commercial banks. For the record, this administration has not printed any new banknotes,â€ he said.

In a Dec. 8 press statement, the Central Bank also denied ever printing or bringing into the country any consignments of new Liberian dollar currency. On the contrary, it confirmed only importing a consignment of U.S. dollars following an assessment of the liquidity needs in the financial and banking sectors.

The importation and infusion of banknotes into circulation are routine activities of the Central Bank under its monetary authority. However, these mundane banking functions have come under intense scrutiny and triggered deep public sensitivities in the wake of recent scandals surrounding the disappearance of L$16 dollar, and a subsequent US$25 million â€˜mop-upâ€™ exercise involving the bank, in which major irregularities were flagged by independent investigators.

On Dec. 5, the government announced the conclusion and start of an urgent US$52 million financing facility from the African Export-Import Bank intended to address the illiquidity within commercial banks. At least seven commercial banks were expected to benefit, namely, the Liberian Bank for Development and Investment, International Bank, Ecobank, United Bank for Africa, Guaranty Trust Bank, Afriland First Bank, and GN Bank.

But exactly how the appearance of new Liberian banknotes relates to this urgent financing facility, remains unclear.

Weahâ€™s Request to Infuse Additional Banknotes into the Economy

In a letter dated Dec. 12 and addressed to the president pro tempore of the Senate, Albert Chie, President Weah appeared to be retroactively seeking authorization to â€œinfuseâ€ L$4 billion dollars already in circulation. In the letter, the president also defended the Central Bankâ€™s actions as necessary responses to ease liquidity challenges throughout the banking sector.

Weah said the current liquidity projection of the Central Bank, compared to the projected need, is very low because the Liberian dollar vault cash position of both the Central Bank and commercial banks makes it imperative to infuse additional banknotes to ease the liquidity pressure as a short term solution.

According to Weah, while the legislature was yet busy deliberating on other pressing national issues, including new authorizations for the printing of a new family of Liberian dollar banknotes, the prevailing situation presents a volatile financial environment, which must be urgently addressed.

It was upon those reasons that the president insisted in his letter that a request be made to the legislature to authorize the bank to infuse some L$4 billion into circulation.

â€œTherefore, in the interest of national security and to enable our people celebrate the festive season in a joyous way, I request the legislature, in accordance with Article 34(d)(ii) of the constitution of the Republic of Liberia, to authorize the Central Bank of Liberia to infuse the amount of L$4 billion into the Liberian economy to ease the current liquidity pressure,â€ the president wrote.

Article 34(d)(ii) of the constitution provides that â€œno monies shall be drawn from the treasure except in consequence of appropriations made by legislative enactment, and upon warrant of the president; and no coin shall be minted or national currency issued except by the expressed authority of the legislature.â€

Opposition members of the legislature have already seized upon the presidentâ€™s letter to criticize him and the bank for unconstitutional and illegal actions.

Montserradoâ€™s Senator Darius Dillon was quick to point out that if the presidentâ€™s request was for mere infusion of already printed Liberian dollar currency into the economy, such action did not require legislative approval because the president and Central Bank both already have such authority.

Sen. Dillon said, therefore, that if the presidentâ€™s request was for the printing of new currency, which appears to already be in circulation, then very serious constitutional questions must be raised.

â€œWhere is the L$4 billion coming from? Was the amount recently printed? And if so, who authorized said printed amount and when?â€

For his part, Unity Partyâ€™s assistant secretary for outreach and the acting chair for the protest organizers, the Council of Patriots, Mohammed Ali, has out-rightly accused the president of constitutional breach in printing new currency without legislative authorization, having repeatedly denied that no new banknotes were ever brought into the country in the wake of the L$16 billion scandal.

Ali believes that the presidentâ€™s communication to the legislature is an admission that either the government lied in its report regarding the disappearance of L$16 billion dollars, or that it has recently printed and brought into the country additional Liberian dollar banknotes without legislative approval.

â€œThis government has told us that the country did not have Liberian Dollars. In recent times, allegations have been flowing around about the CBL printing new money on the authorization of the president,â€ Ali wrote on Facebook.

The Liberian economy faces a severe liquidity crisis believed to be the result of deliberate actions by the Central Bank of Liberia and the Ministry of Finance and Development Planning to address the countryâ€™s inflation problem. Between April and May of this year, a government â€˜mop-upâ€™ exercise was expected to suck out of circulation what was believed to be excess Liberian dollars in the money market.

But the persistent liquidity crisis suggests that these early measures may well require new and urgent retooling.