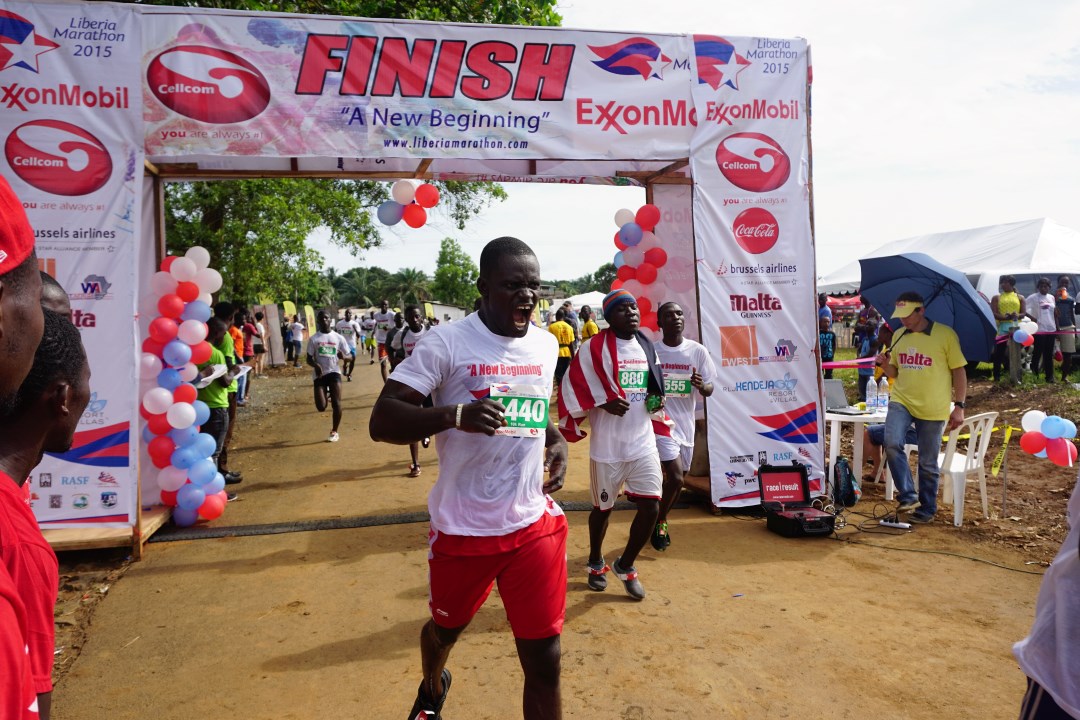 MONROVIA, Montserrado â€“ About 1,500 Liberia Marathon runners brought a portion of the city along Tubman Boulevard to a halt on Nov. 8 as police prevented unauthorized vehicles from traversing the route. In a country where almost 80% of the population identifies as Christian, many churchgoers found themselves stranded.

Charles Dorme Cooper, a board member of the Liberia Marathon Trust, said one of the reasons they selected Sunday was because â€œa lot of people do work on Saturdays.â€ He said that the Liberian National Police preferred a Sunday race because there was â€œless traffic on Sunday and itâ€™s easier for the police to block the road.â€ Charles Cooper, a board member of the Liberia Marathon Trust. Photo: Jefferson Krua

Along the path of the marathon, groups of Liberians stood along to cheer on runners. The majority of, the Liberian spectators unsurprisingly wanted a Liberian to claim the top prizes. This was reflected in various shouts of, â€œBlack man strong past white man. Donâ€™t let the white man pass you nah!â€ An expat running the half-marathon closes in on the finish line. Photo: Jefferson Krua

When Sierra Leoneans prevailed as the overwhelming victors of the day, winning eight of the 22 prizes not reserved for Liberians, there were murmurs in the crowd of â€œthe people eating all our money.â€ This year there were 22 prizes in a variety of categories. Joy Kollie, who won the womenâ€™s race in 2013, came in third place this year. She was bested by fellow Liberian Lucy Massaquoi, who also won the Patriot prize for being the first Liberian female to cross the finish line. A boy competes in the 10k race alongside adult runners. Photo: Jefferson Krua

It was in 2011 that a group of Liberians and expats decided to organize a marathon in Liberia. Charles Cooper was one of the Liberians who helped found and organize the first marathon.

Since the beginning, he said all the organizers were volunteers. The first time they decided to start paying race organizers was when Race Director, Eunice Dahn, was appointed last year. He said the long-term goal was to make the marathon sustainable and â€œthe only way to make it sustainable is for people to actually get paid to run it like it is their actual job.â€ This yearâ€™s marathon on November 8 proved to be a successful event after the race was canceled the previous year due to the Ebola outbreak. Although several people were taken to the medical tent for care for reasons including exhaustion from heat and joint pain, there were no casualties.

Despite the name, the Liberia Marathon was not a full-length race. The half-marathon ran from the Freeport of Monrovia to the ELWA compound in Paynesville.

Cooper said the constraints of the Ebola outbreak dictated that if the Trust were to have the race this year, it would have to be shortened â€“ to allow runners enough time to train and to ensure that the funds organizers raised were adequate to fund the race.

â€œWe can sum it up in one word â€“ Ebola,â€ he said. â€œWe were supposed to do the full marathon last August. We actually began advertising and we had sponsors give money, and we spent money [in preparation].â€

Cooper said they were forced to shut down the race when it became clear that the Ebola outbreak was a major epidemic. â€œWe lost money, and we lost time,â€ he added. â€œWe were put in a situation where we had to go back and ask sponsors for money to redo the race.â€

At the beginning of 2015, when Ebola cases had decreased significantly, the Trust began planning to hold the event in August again. â€œWe [again] started planning, and we had that [second] reoccurrence of Ebola,â€ Cooper said, referring to the last outbreak that came in late June 2015 after Liberia was declared Ebola-free. â€œWe decided to at least do a half-marathon because we didnâ€™t want to lose the momentum.â€ Runners revel in the festivities after the race. Photo: Jefferson Krua

The marathon required sponsorship from companies like Cellcom, contributing US$30,000 and Exxon Mobil, which contributed US$23,000. Several other corporate sponsors such as RLJ Kendeja Resorts and Coca-Cola also provided funds for the marathon. Even then, the organizers had to organize crowdfunding for an additional $18,000 to make the race a success.

Cooper said his â€œvision for the brand of the marathon is kind of a cathartic event. We need to have these events where we are working together as a team and achieving something together.â€ He found it especially gratifying to see the armed forces, the police, and other members of society working together towards a common goal. â€œItâ€™s a big symbol of what Liberians can do if they work together.â€