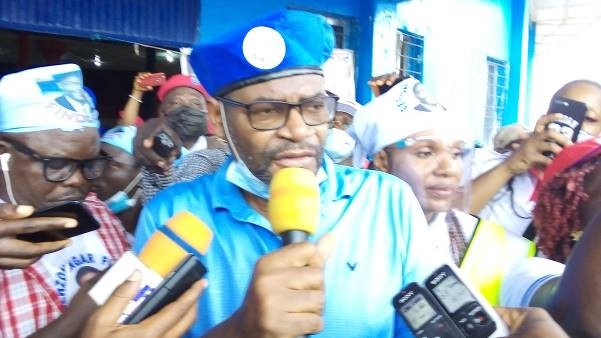 The acceptance ceremony was held on Saturday at the front of the Unification Pavilion at Buchanan’s Fairground. It began with a parade from Monrovia Junction in Buchanan and went through the principal streets of the city before ending at the Fairground, where scores of supporters and members of the ruling Coalition for Democratic Change had gathered.

Findley, who previously headed the Senate, was recently petitioned to run for the county’s Senate seat. The petitioners noted that he had contributed immensely to the growth and development of Grand Bassa over the years and his absence at the legislature had created a vacuum. Findley was defeated by Liberty Party’s Sen. Jonathan Kaipay in 2014.

At the time of the original petitioning, Findley, who had not yet resigned as foreign minister, said he could not respond to the petition until he consulted with President George Weah. After 25 days, he tendered in his resignation on July 27, which was accepted by the president on July 28, giving him the opportunity to participate in the upcoming senatorial elections. On that same day, Findley participated in the ruling party’s primary and won without a challenger.

During the formality of the acceptance program on August 15, Findley agreed to contest for the county’s seat on December 8.

“To the chiefs and elders, to the young people, young ladies and young men that have petitioned me during my birthday and also petitioned the president, I want to say to you all that the president has heard your voice and responded by sending me back to you,” Findley said.

“Based on your request, he has sent me back to my people to serve. At this point, I accept your petition to contest for the senatorial race for 2020.”

Findley said his agenda for this run would be to elevate the Grand Bassa Community College to a bachelor degree-granting institution, pave the road from Buchanan to the St. John River in Grand Bassa’s fourth electoral district, create jobs, and empower market women through microfinance loans.

He continued: “If you elect me as senator of Grand Bassa County, we will reconcile this county. In the absence of reconciliation, you are not united. To be united means that we will be successful in improving the lives of the people of this county; therefore; reconciliation is going to be a major role that I will institute if you elect me.” 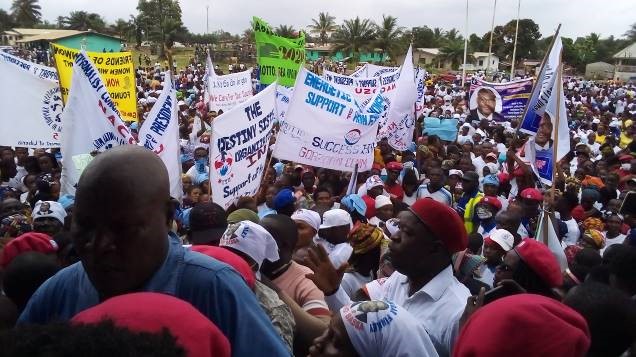 Scores of citizens in attendance at Findley’ program on Saturday in Buchanan. Photo: Sampson David

He praised the Coalition for Democratic Change government for the level of progress made so far in Grand Bassa, including the pavement of the Fairground Road.

“This government is doing well and we will continue to do more,” he said.

Findley is running to unseat Sen. Nyonblee Karnga-Lawrence, the only woman in the Senate.

After Findley was defeated in 2014, he switched party to the Coalition for Democratic Change in 2017 to help the CDC reduce Liberty Party’s control over the county. With the support of Findley, the CDC won Grand Bassa in the second round of the presidential election in December 2017 as Liberty Party as a party did not endorse any second-round candidate.

Findley is also a former board chair of the Liberia Airport Authority.

Sharing
Tags Gbehzohngar Findley
Contributions to The Bush Chicken are not tax deductible.