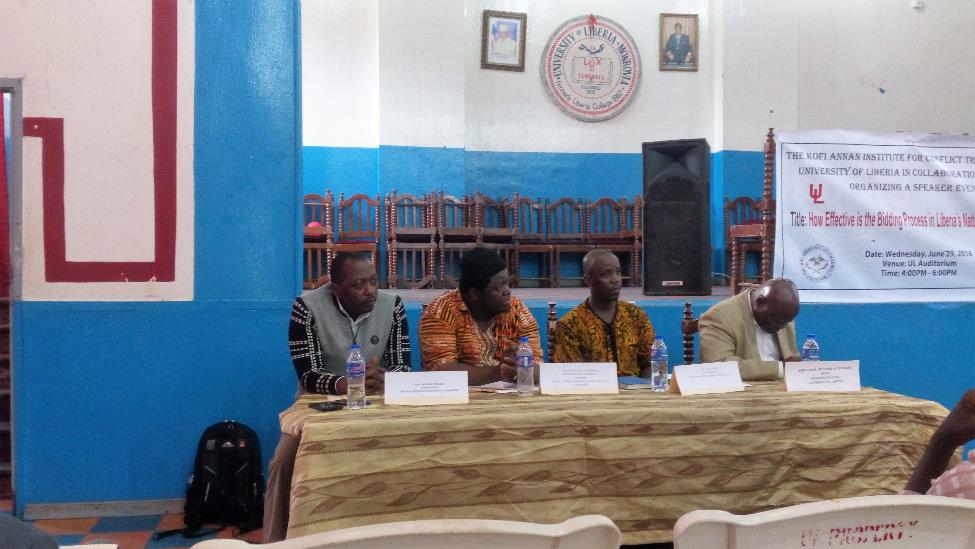 MONROVIA, Montserrado â€“ On June 29, the Kofi Annan Institute for Conflict Transformation at the University of Liberia, in association with GIZ, hosted a panel discussion on the theme, â€œHow Effective is the Bidding Process in Liberiaâ€™s Natural Resource Sector?â€

This panel featured Eugene Fallah Kparkar, chair of the House Committee on Investment and Concessions; Silas Siakor, the former director of the Sustainable Development Institute; Jackson Speare, coordinator of the Natural Resource Management Consortium; and Prof. Geegbae A. Geegbae, Dean of the Business School at UL. Mae Azongo of Front Page Africa moderated the discussion.

The forum provided the public with a valuable opportunity to interact with both government and civil society actors in the wake of a controversial report on corruption in the extractive sector that was recently released by Global Witness.

Kparkar spoke frankly on the challenges the government faces in regards to the natural resource sector, noting that they have â€œcreated an image problem for the country and its nascent democracy.â€ Kparkar also expressed regret that the government had not investigated the claims of Canadian mining magnate Len Lindstrom in his book â€˜Corruption 101: Liberia Style.â€™

Further, he lamented that the government was not taking advantage of existing technical expertise in the country, stating that â€œwe have to utilize our universities.â€ To transform Liberia, Kparkar noted that natural resource revenues should be targeted to improving the health, education, and infrastructure sectors.

In what may have been a nod to his support of the investigations of those accused in the Global Witness report, Kparkar observed that â€œthose in a position of trust should be held accountable for their actions.â€ He praised President Muhammadu Buhari of Nigeria, Joseph Pombe Magufuli of Tanzania, and Macky Sall of Senegal as shining examples of African leaders making bold reforms to strengthen their respective nations. Speare observed that the bidding process is a safety net that â€œdrives us to the real cost.â€ Drawing on Kparkarâ€™s comments that too many natural resource concessions are granted through a non-competitive process, Speare stressed that open bidding was the best way for Liberia to derive the most value from its natural resources. He noted that one of the greatest shortcomings was that the government did not fully follow the principle of â€˜Free, Prior Informed Consent,’ which has led to tensions between communities and the government regarding the granting of concessions.

Siakor spoke quite bluntly, stating that the â€œbidding process in the natural resource sector is mostly ineffectiveâ€¦ and Liberia is now paying the price for that.â€ He squarely placed the blame at the feet of the legislature and the executive, noting that the respective institutions were charged with oversight of the sector and the appointment of officials managing the industry.

Siakor also sounded a warning note, commenting and querying, â€œour country is not on a promising trajectory. The iron ore is almost depleted; the forest is almost goneâ€¦ what will the next government have to build on?â€

Speare echoed these comments, urging the nation â€œto look at a new economic model,â€ suggesting that a creative approach could allow the country to derive greater benefit from infrastructure developed by concessionaires.

The event concluded with a donation of a public addressing system by KAICT graduates, which will allow the Institute to host future seminars more smoothly.