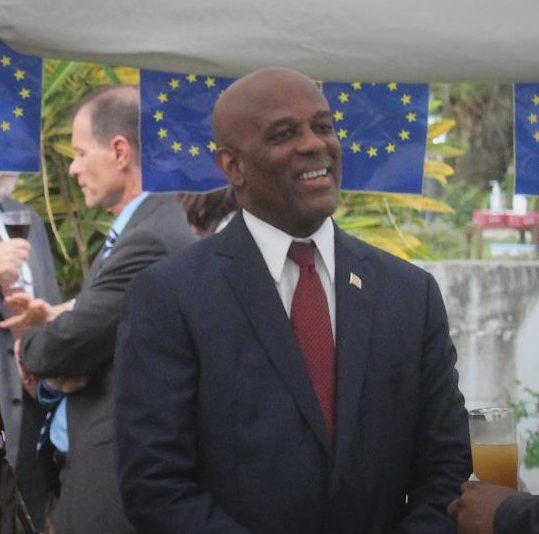 BUCHANAN, Grand Bassa â€“ Citizens of Grand Bassa are mourning the death of Charles Brumskine, the former political leader and standard bearer of the opposition Liberty Party, who died late Wednesday, at the age of 68. His death followed a period of illness in the United States.

A prominent son of Grand Bassa, Liberiaâ€™s fifth largest county by population, Brumskine led his county in many capacities and touched their lives of its population in diverse ways, as residents struggle to process the grief of his passing.

The Grand Bassa Legislative Caucus, the Office of the Superintendent, chiefs, elders, traditional leaders, women and the youth groups across the county immediately reacted to Brumskineâ€™s passing with expressions of grief.

Grand Bassaâ€™s Superintendent Janjay Baikpeh, who has been recovering from a recent automobile accident, posted to his official Facebook page condolences to the Brumskine family, expressing the countyâ€™s feeling of loss.

The countyâ€™s fifth district representative, Thomas Goshua, who also chairs the countyâ€™s legislative caucus, also took to Facebook to express his personal regret and those of his constituents.

â€œWords are inadequate to express the sorrow, hurt and pain that we are experiencing now as a people, but we take solace that he made an indelible difference,â€ Rep. Goshua wrote.

â€œFor and on behalf of the Grand Bassa Legislative Caucus and all the people of Bassa, we mourn the inevitable passing of this leader, Cllr. Charles Walker Brumskine,â€

He also added: â€œTo the immediate family, the Bassa people mourn with you, Liberia mourns with you. May his soul rest in perfect peace, and light perpetual continuously shine upon him.â€

The president of the Bassa Youth Caucus, Othello Contowor, particularly remembered the former statesman for his legal stance on national issues, and his respect for the rule of law, including a complaint he filed to the Supreme Court challenging the results of the 2017 elections.

â€œMy heart is weighed with deep sorrow, and a cheek watered with tears to register our condolences to the Brumskine family, the Mighty Liberty Party, and all our concerned party for the loss of one of our finest kinsmen. The youth say goodbye and rest till we meet again,â€ he remarked.

â€œI donâ€™t have a space in my heart to call you a dead man. With uncontrollable tears in my eyes, I say sleep on my CWB.â€

A stalwart of Liberty Party and chief of staff in the office of Grand Bassaâ€™s Senator Nyonblee Karngar-Lawrence, Philip Johnson, said Brumskine taught him many things about the law and society that have forever impacted his life and views of Liberian politics.

According to Phillip, Brumskine encouraged his entry into politics by persuading him to take an appointment to chair the Liberty Party in Grand Bassa in 2014, a position he had earlier hesitated to accept.

â€œI never wanted to be part of the Liberian Politics, but two individuals brought me into it, Cllr. Charles Walker Brumskine and Senator Nyonblee Karnga-Lawrence. Whenever we met, he would call me â€˜Boss manâ€™ and I would reciprocate the same â€˜Boss man,â€™â€ he said.

Mustapha Konneh, the research officer in the office of Grand Bassaâ€™s Senator Jonathan Kaipay, also described the late Brumskine as the most peaceful Liberian politician and father of the downtrodden masses. For Konneh, Brumskine will always be remembered for his legal acuity.

â€œWe have lost a hero, a true patriot, and a champion of peace â€“ one like none other. No amount of â€œdonâ€™t cryâ€ consolations will hold back our tears,â€ Konneh said. â€œLeave us, friends. Let us cry the pain away from our hearts. Leave us, friends, let us scream our pain away. If we donâ€™t cry for the loss of this asset when else shall we cry, then?â€

With degrees in law from the Louis Arthur Grimes School of Law, the University of Liberia, and Dedman Law at Southern Methodist University in the U.S., Brumskine began his career in law under his father. His law firm, Brumskine & Associates, has for many years been a permanent fixture on the Liberian legal landscape.

Brumskineâ€™s rise to political prominence and fame was both meteoric and controversial. Having served as legal advisor to former rebel leader Charles Taylor, Brumskine entered the Liberian Senate as president pro tempore when Taylor and his National Patriotic Party were elected to the Liberian presidency.

As pro tempore, Brumskine is believed to have played a lead role in the exit of West African peacekeepers from Liberia, through the Status of Forces Agreement he advised Taylor to insist the peacekeepers agree to.

Brumskine was, however, forced to resign his Senate seat and flee Liberia in 1999 following disagreements with Taylor that threatened his life. He orchestrated a daring return to Liberia in 2003 to challenge Mr. Taylor in presidential elections scheduled for the same year. That election was postponed due to a resumption of civil war.

Since 2003, Brumskine has unsuccessfully contested three consecutive presidential elections: in 2005, 2011, and 2017. Though he lost the presidency in all these elections, he overwhelmingly won his county of Grand Bassa.

His death on Wednesday was not entirely unexpected, as he has for some time suffered serious illness, evidenced by his recent signs of physical frailty. In August, false news of his death circulated the internet and Liberiaâ€™s media landscape.

His daughter, Charlene Brumskine also issued a statement in October that the lawyer and politician was still far from fully recovering from an undisclosed ongoing illness.

With Brumskineâ€™s death, the people of Grand Bassa, and indeed all Liberia, have lost an iconic leader.