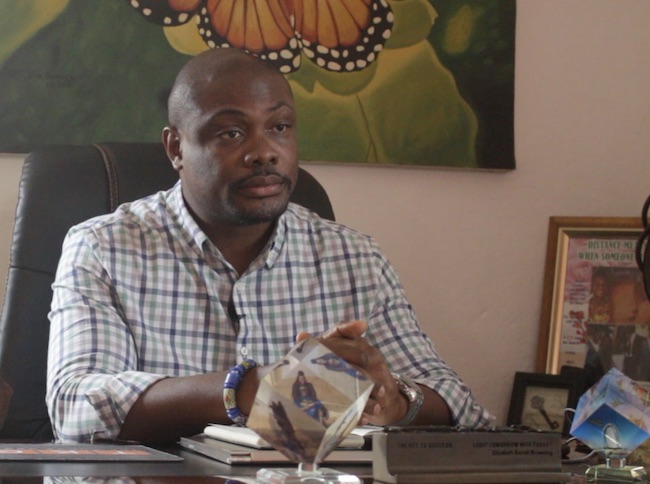 The 2020 senatorial elections are still over a year away, but some candidates are already mobilizing their resources in preparation to enter the race. One such candidate is the 40-year-old Taa Wongbe, CEO of the Khana Group, the data collection and research firm that has serviced international clients such as Afrobarometer and Gallup.

[Disclosure: Taa Wongbe is a distant relative of the author]

In a recent interview with The Bush Chicken, Wongbe detailed his aims for running for the seat currently occupied by Sen. Thomas Grupee. Wongbe, who recently served as a senior advisor on the presidential campaign of Alexander B. Cummings, emphasized a plan to have districts within Nimba enter agriculture-based private-public partnerships to generate not only income but also jobs for Nimba citizens.

â€œI believe one of the key things around Nimba County is agriculture â€“ and that is going to be one of my major focus,â€ Wongbe said.

The senatorial aspirant proposed that each of Nimbaâ€™s districts have their own agriculture projects where they partner with a private company to â€œcreate our own funding, if you will, and not be dependent on government funds.â€

â€œI have a track record here in terms of building businesses,â€ he added. â€œI understand this stuff. Thatâ€™s why I believe the private sector is the way to go. While weâ€™re planting these things, and theyâ€™re growing. Weâ€™re creating jobs.â€

While Wongbe is clear on his objectives for the county, he appeared to have a shaky knowledge of the affairs of the legislature. He was unsure about the specific benefits that lawmakers currently receive â€“ a topic that lawmakers have deliberately kept obscure from the general public, but that someone who is a key player in a major political party (the Alternative National Congress) should know.

â€œI donâ€™t know what the number is, but I know itâ€™s above US$10,000,â€ he estimated the monthly salary of a senator. He promised to remit US$10,000 of his senatorial salary to the people of Nimba. He also advocated for lawmaker salaries that did not exceed US$5,000 a month and said he would support any bill that pushed to lower it.

In terms of bringing transparency to the legislature, Wongbe focused more on the need to increase the presence of similarly minded individuals in the legislature. He expressed skepticism that he could do much by himself.

He noted that â€œtrying to bring people on or work with existing people so that we can be able to change the systemâ€ would be a key focus of his in bringing transparency to the legislature.

â€œWe canâ€™t change anything overnight â€“ letâ€™s be clear about it. But we can be able to create a caucus â€“ a transparency caucus â€“ that can be able to push. And the sooner we have other people coming on, the better itâ€™ll be, in my mind,â€ Wongbe added.

â€œI can push out bills all the time, but youâ€™ll still not know who voted for what. But if we have about ten people, about twelve people who say, Iâ€™m gonna make my vote public â€“ thatâ€™s what happened in the associate justice case. Some people made their votes public to show that they voted against.â€

Meanwhile, he said he would maintain a website that shows how he votes on issues, along with publicizing bills. Wongbe also called for the terms of senators to be reduced from nine years to six and said he would support any effort in that direction. Additionally, he promised to publicly declare his assets when officially filing with the National Elections Commissions.

Although his mother hails from Lofa, Wongbe, whose late father Jenkins Wongbe was a prominent Nimba statesman and a signatory to the 1986 constitution, said selecting Nimba to run for office was a no-brainer, given his affinity for the county.

â€œIt was not a choice between one county and the other county. I do a lot of things in Lofa right now,â€ he told The Bush Chicken. â€œMy late father always told me, â€˜No matter where you go, Taa, you can be whoever you wanna be in the U.S. and globally. There is nowhere better than home.â€™ And I felt at home in Nimba County. In fact, I donâ€™t really spend most of my time in Monrovia. Iâ€™m always in the county. Even before then. A lot of people who know me say, Taa canâ€™t say anything without saying Nimba, Nimba, Nimba. Because I have the raw passion for Nimba.â€

He may not fluently speak Dan, one of the major languages of the county and the language of his late father, but Wongbe appears to be well versed in the affairs of the county, especially having traveled extensively across Nimba.

He has visited the Nimba County Community College several times, often serving as a guest speaker. Because of that, he is well aware of the challenges the institution faces, including the limited source of funding that has often led to strikes by the faculty. To fix that problem, he emphasized the need for the college to seek other sources of funding and support from international partners.

Wongbe also seems to have a good understanding of the public debate behind splitting Nimba into multiple counties, noting that the issue has existed for decades.

â€œYears ago, my late father was a writer. He used to write about Nimba, and one of the stories he wrote about was â€˜Nimba on a Swinging Bridge,â€™â€ he explained. â€œEven in the 1960s, there were calls â€“ before I was born â€“ for a divided Nimba. And guess what? Weâ€™re still here. Nimba is still strong. We just need to keep most of the folks who believe in this â€˜stronger Nimbaâ€™ together so we can be able to push the message to our people.â€

Besides the need for dialogue, Wongbe also emphasized that the focus should be on ensuring that all communities in Nimba can reap the dividends of development, as that would help foster a stronger county identity.

When questioned about why his wife and three children do not live in Liberia and the message that sends to voters, Wongbe said voters do not care about where the spouses and children of their leaders live because they had elected former president Ellen Johnson Sirleaf and President George Weah, whose family members lived abroad during their rule. Moreover, he pointed out that the incumbent in the seat he was pursuing, Sen. Thomas Grupee, had his wife and children abroad.

Wongbe cautioned against equating loyalty and passion for Liberia with where oneâ€™s family members live: â€œMy wealth and my dedication have always been Liberia. This is why the headquarters for my company is in Liberia. This is why we create over 300 jobs every year in Liberia. This is why I live here. Iâ€™ve been doing that for over ten years now. My first time coming back home was in 2007. I went to the states in 1999, and while I left, my heart didnâ€™t leave Liberia.â€

He further noted that he only left Liberia because of the war and started to move back as soon as conditions appeared better.

â€œWe came to invest our money here â€“ to lobby and advocate for Liberia, generally, not only Nimba county â€“ for Liberia in general,â€ he said. Regardless, Wongbe said his wife and children would soon be moving back to Liberia.