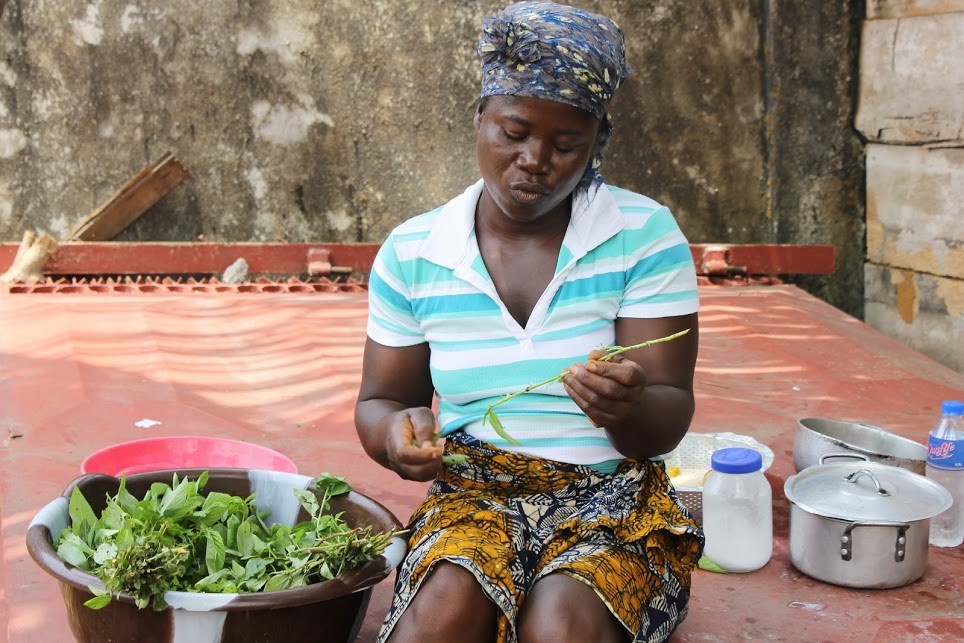 â€œIf you know you not small you munna set in the front seat o!â€ – Taxi patron solicitor

I could not get it together this morning. I wasnâ€™t dressed and out of my room until nearly 11:30 a.m. today â€“ fine for a weekend in Atlanta, but a huge setback to the daily grind in Liberia.

The house â€œstaffâ€ knocked on my door a few times to make sure I was OK since Iâ€™m usually up and about much earlier. Once I finally got it together, I greeted everyone for the day and decided I was just going to let the day come to me.Â  If that meant having a lazy day around the compound I was completely fine with it.

The weather was spectacular. It was overcast most of the afternoon with the threat of thunder showers looming but the clouds never fully releasing their cooling raindrops. Since it was so nice out, I decided to stay outside for a while and get to know Cecelia, the cook, a little better.

Assuming Iâ€™d find the cook in the kitchen I looked there for her first. As usual, sheâ€™s not there. Instead, I found her in a corner of the compound wedged between the chicken coop and row of the dog shelters. The dogs only come out at night in the compound â€“ theyâ€™re supposed to be security dogs but mostly just noise makers at best.

I dragged the official white stacking plastic chair of Africa up to Cecelia and started to prod a bit.Â  As with most people, I try to engage in conversation here, sheâ€™s a bit hesitant but she wonâ€™t be able to run me off, HA! Â After telling her a bit about myself and what I do with The Bush Chicken and where I live in the US, she was willing to talk but only to answer direct questions initially.

I noticed she had a large bowl of greens outside sitting on the metal doors of an in-ground shed along with some red oil, rice, and pepper. Curious, I asked her what she was doing with the food out here rather than in the kitchen. She said she was about to start cooking and that she preferred to cook outside because the kitchen gets too warm. While I didnâ€™t understand this reasoning as the house got a pretty good breeze being near the ocean, I decided not to push the issue.

Eventually, the other three guys who work/hang at the house during the day made their way over to me and Cecelia to join in the conversation. As Cecelia started to add the coal to the simple hand welded grill, I couldnâ€™t help but wonder aloud again how interesting it was that she would prefer to cook outside than in the kitchen. With the other guys now being privy to our prior conversation they immediately interjected.

â€œDa lie my sister, da not why she can be cooking outside. The Papay say we not allowed to use the inside kitchen to cook,â€ one of the guys said.

Dumbfounded, I asked Cecelia what she does when itâ€™s raining outsideâ€¦.she told me she takes the grill and the food into one of the empty dog shelters and cooks in there.

A man made, makeshift 4â€™x 6â€™ (at best) scrap wood roomâ€¦.that was built for crating animals.

I was furious. But what to do, as Iâ€™ve heard every 30 minutes since arriving here, â€œThis is Africaâ€â€¦.no THIS is not right. I decided whatever she was preparing outside today for herself and the rest of the â€œstaffâ€ would be what I ate.

As I got some water from the freezer, I noticed the water the house staff was drinking was always placed on the other side of the freezer in a corner. I also recall always seeing them save the empty drinking bottles after guests are offered bottled water at the house.

After lunch I decided to watch them to find out exactly what they did with the empty water bottle I just finished. I saw them taking my once-factory sealed, now empty water bottle to the sink, fill it with tap water and put it in the freezer in the corner where they always take their water from. Really? Water?

I couldnâ€™t take it.

â€œWe not allowed,â€ was the reply.

What would make me better than them to have the privilege of drinking bottled water but them being forced to drink the water from the well essentially? There are many things I will never understand about this country. Maybe Iâ€™m being hypersensitive thoughâ€¦.maybe.

After lazing on the porch for an hour or so after lunch, I decided the weather was so nice Iâ€™d go for a walk. Of course two of the guys came along with me â€“ unsolicited, of course, but they keep me laughing so itâ€™s all good.

We went to a small compounded subdivision that was in the process of constructing additional homes. These homes are priced at US market rates, in exchange for the more western style of constructionâ€¦.not really worth the price increase, personally, but many homes here have already been sold and occupied.

Interestingly enough, as we walked past one of the eight or so completed homes in the subdivision I noticed two security guards posted outside of a particular home.Â  I asked the gate man/security guard if he knew why these security guards were there. He told me the home had been purchased by the presidentâ€™s son and even though he hasnâ€™t occupied it yet, there is security around the clock at the home. Strange stuff.

We completed the tour and decided to go for a quick walk on the beach before heading back home. By the time we arrived back at the house, my friend called to say he was on the way to pick me up. Once he arrived and his cousin arrived we were dropped off at the RLJ Kendeja Resort and Hotel, built in Liberia by founder of BET Robert Johnson.

The resort is nicely planned and maintained, particularly the outside rear facing the sea.Â  After my friend and I spend an hour or so chatting on the beach we decide to go to a local spot to grab a bite to eat. By local, I mean a taxi ride, pen pen ride, and a 20-minute walk to get to a community bar called Tattooâ€™s – House of Flavors.

To get there, as most location in Liberia, it takes some effort. In this case, we had to take a pen-pen and a taxi. The pen-pen, by the way, is by far my preferred method of transit for several reasons.

For one, itâ€™s much faster than bus or taxi â€“ illegally faster but faster nonetheless. Actually, Iâ€™m not sure I can remember seeing very many speed limit signs, but I am sure they were there.

Two, there are no personal space issues as generally the drivers are prepared to transport only one passenger at a time, like I said though, Iâ€™ve seen them carry up to four.

Three, after spending so much time in hot spaces such as taxis, businesses, everywhere, the breeze generated from the pen-pen is a much appreciated break between destinations.

Anyway, after we transfer from ELWA Junction, where the pen-pen takes you, we had to take a taxi for the next portion of the way. We see a vehicle that has two seatsâ€¦not really but two by Liberian public transit standardsâ€¦I get into the front seat and my friend gets in the back.

At the moment I begin to ease my left leg into the car, I hear the patron solicitor saying loudly to no one in particularâ€¦.â€If you know you naâ€™ small you munna get in the front seat o!â€

â€œSo you tryna say Iâ€™m not small?â€ I ask with indignation.

No response. I continue looking at him for a response he wonâ€™t even give me eye contact.

I get in the front seat and the driver is just looking at me likeâ€¦.are you gonna move to the back seat or what? At this point Iâ€™m internally laughing at the insults and shade that is being thrown at me for a ride. I tell the driver he and his partner are trying to insult me and I can fit with another passenger in the front seat if he wants to carry two of us.

I am not moving to the back, just call me Musu Parks, Rosa Parksâ€™ Liberian sister. The driver just smiles this ridiculous smile, showing me all his teeth and says, â€œBut ma, we canâ€™t make it.â€ He just doesnâ€™t know, we certainly will make it, â€˜cause Iâ€™m not moving. Itâ€™s the principle at this point. Sure I could moveâ€¦.but itâ€™s not gonna happen today.

Just then, another petite young lady approaches the car for transit, I tell her to sit halfway on my lap and instruct the driver to step on it. We donâ€™t have time for his delaying tactics. He scratches his head and pulls off. Catching my irritation from the side of his eye after we depart, he begins to apologize for delivering me his low-key insult.

The passengers in the back of the taxiÂ accuse him of trying to get a girlfriend after laying insults and they start to laugh at him. The tension is diffused and we all get dropped off at our respective destinations.

As we start the 10-minute walk to the bar I have no idea how anyone would know where this little spot is located as it is thereâ€™s no sign from the main roadÂ  and the establishment is positioned on what essentially seems like an unlit alley.

However, there were a few folks in there, so apparently word of mouth marketing is critical when it comes to marketing a business in Liberia. After wolfing down a US$4 order of fries I was satisfied that Iâ€™d be able to get through the night since thereâ€™s really no access to midnight snacks at the home where Iâ€™m staying.

The bar was busily decorated with 15 different paint colors on the walls and the logos of popular football clubs in European football leagues. Colorful tables and chairs anchored the double-wide trailer sized nightspot.

With unnecessarily loud music and an odd selection of satellite programming displayed on a projector, this local spot seemed like it could have potential. Within about 90 minutes, our other friend came to pick us up and dropped me off at the house.

Daily Thought: By the time the end of the day approaches in Liberia, depending on your socio-economic status, one would be exhausted. I havenâ€™t watched TV since Iâ€™ve been here and honestly I havenâ€™t thought about it nor had time to.

Sharing
Tags Liberian with an Asterisk
Contributions to The Bush Chicken are not tax deductible.