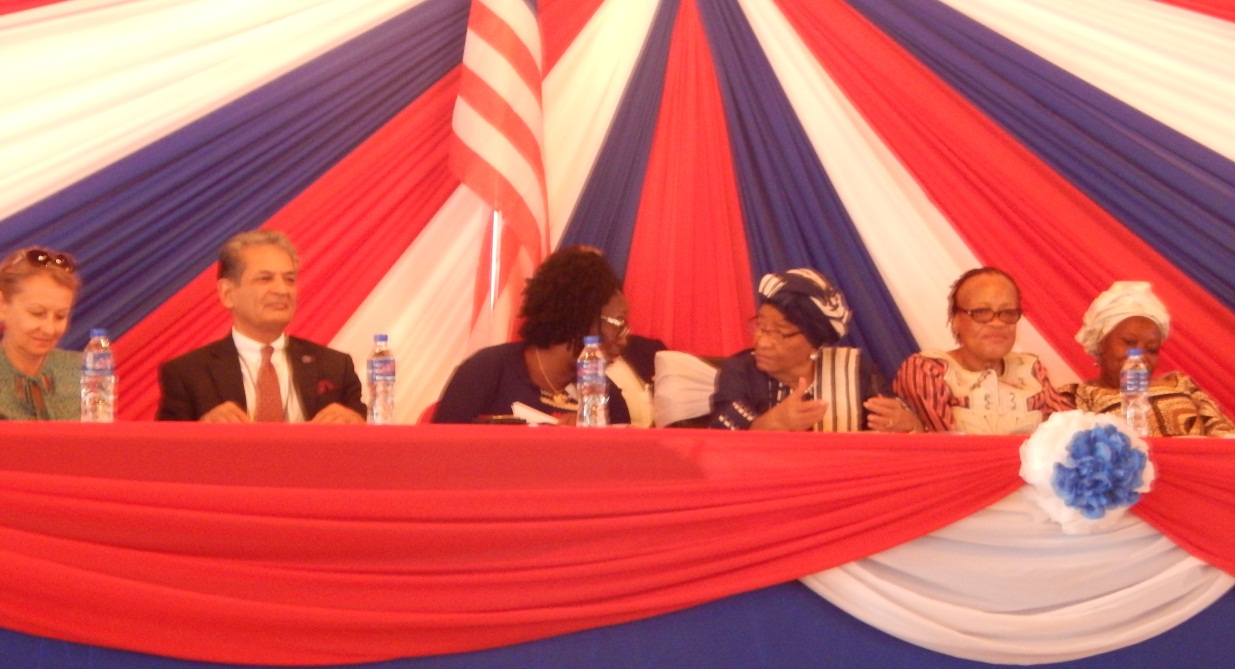 PAYNESVILLE, Montserrado – President Ellen Johnson Sirleaf has threatened to use her executive power to enact provisions of the Domestic Violence Act if the legislature does not pass the bill.

Sirleaf made the statement on Wednesday at the opening of a two-day National Women Conference at the Paynesville City Hall.

She called on lawmakers to see a reason to pass the act or she would use her executive power to issue an executive order making the bill a law.

â€œI would prefer not to use executive order, but I can use it if you donâ€™t pass it,â€ she said.

In July 2014, the Ministry of Gender, Children, and Social Protection and stakeholder groups working on women issues in the country submitted a draft Domestic Violence Bill to the office of the president for submission to the National Legislature.

The bill was reviewed and endorsed by the cabinet in June last year and submitted to the legislature by the President in September 2015.

In April 2016, members of the legislature began debating the bill with some lawmakers expressing the view that a provision in the Act calling for the elimination of Female Genital Mutilation was not necessary. Instead, the lawmakers suggested that FGM be practiced on women and girls at the age of consent. This suggested amendment to the bill was hugely criticized by supporters of the bill.

A representative of the Women in Peace Building Network, Tambah Johnson said the suggestion was a clear attempt to go against the intent of the drafters of the bill.

Since then, the bill has remained in committees room before the legislature.

Sirleaf said the bill will protect women against violence and ensure that young girls are free to pursue their education.

The Liberian leader said while there were cultural and traditional practices that must be upheld, they can be done without violating the rights of women.

Meanwhile, the president encouraged Liberian women to do more to study the effects of another proposed legalization to improve women’s conditions, the Affirmative Action bill.

â€œThe principle of equity that is imposed by that bill is incontestable, but the procedures to implement it require more study, the financial implications require some study â€“ and so what I need for you to do is to begin to look at that bill, to look at the timing of that bill, to look at the implications of that bill and the processes for implementation so that when we pass it, we donâ€™t find that weâ€™re unable to do it because of these constraints that Iâ€™ve just pointed out,” she noted.

Sirleaf said while she supports the women’s quest, some work needs to be done on the bill. She added that the bill was introduced at a time the country was close to an election that was highly costly.

The Affirmative Action bill introduced by the Women Legislative Caucus is seeking 21 seats to be reserved in the House of Representatives. Out of the 21, the bill is proposes 15 seats for women in the 15 counties, three seats for people with disability and the remaining three for youths.

Montserrado County’s ninth district Representative Munah Pelham Youngblood said she supports the bill because she believes in equality and more participation by women in politics.

â€œThe competition is very strong and Iâ€™d believe that our women who cannot afford to fight â€“ not all women can fight, and so we must be able to set seats aside so that our women can form part of the decision-making processes of our country, especially at the first branch of government,â€ Youngblood said.

She dismissed what she said were claims that the bill was intended to keep female lawmakers in power. She said the re-election of any lawmaker depends on their performance.

At the end of the two-day conference, the women collectively agreed to work to tackle challenges affecting the social, economic, and political progress for women.

Among the challenges identified are entrenched traditional practices, a much higher illiteracy rate for women, and widespread discrimination against women.