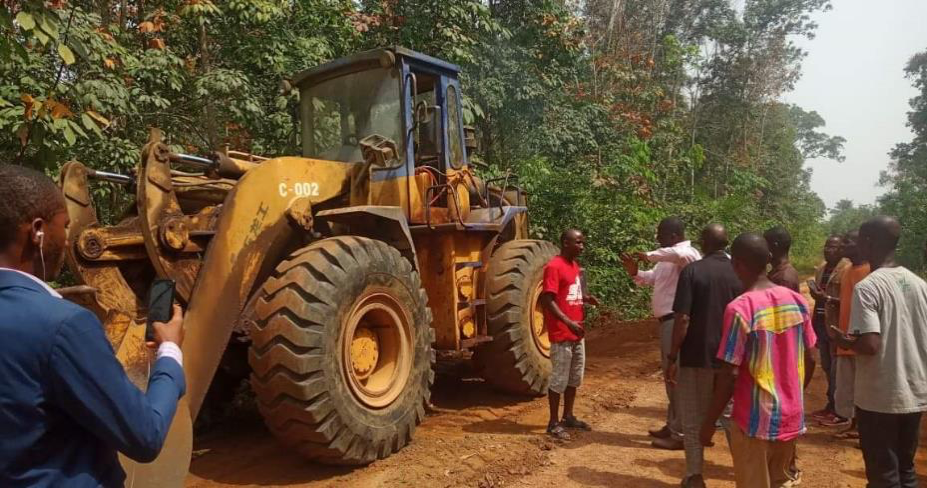 TUBMANBURG, Bomi â€“ Bomiâ€™s Senator Sando Johnson has kicked off a major road rehabilitation effort in the county ahead of the rainy season. The initiative, which will open many of the feeder roads that become damaged and nearly impassable during the rainy season, is expected to bring some relief to citizens.

On Tuesday, Jan. 28, Sen. Johnson returned to the county with earthmoving equipment for the start of the road rehabilitation. He told reporters that the initiative will start with Gonzipo Road which has remained deplorable for many years. The Gonzipo Road connects Admadu Town in Klay district to other parts of Bomiâ€™s second district.

At the groundbreaking ceremony, the lawmaker called upon Bomi citizens who are the direct beneficiaries of the initiatives, to take ownership of the project if it is to be successful. â€œPlease let us do this together. With your little support, we will open up most of the roads,â€ he said.

A jubilant crowd met Sen. Johnson on his arrival and thanked him for aiding the important task of reopening their roads following very long periods of neglect and abandonment over the years.

Many citizens of Gonzipo had complained of being unable to transport their produce to the market because of the poor condition of the roads. Sen. Johnson was recently forced to respond to a request by citizens of Malema-Kpana Town for power machines to fell trees and improve bad road network.

But the senatorâ€™s gesture has not been without criticisms. Some citizens accuse Johnson of trying to win the support of voters for his re-election campaign after failing to achieve anything tangible in the county. Senatorial by-elections are scheduled for October this year.

Recently, the senator embarked upon some notable development initiatives in the county, including dedicating two town halls in Bowien and Bonjeh towns, and a Palalva hut in Karnga Town, among others.

Johnson is a member of the National Patriotic Party, one of the parties currently within the ruling Coalition for Democratic Change. Amid reports that he enjoys the support of his partyâ€™s standard-bearer and current vice president, Jewel Howard-Taylor, there has erupted a war of words between him and former House Speaker Alex Tyler, who may also run for the countyâ€™s Senate seat on the ruling CDC ticket.

Johnson accuses Tyler of not living up to the Memorandum of Understanding for the three parties within the governing coalition, considering that Tylerâ€™s party is also part of the coalition. According to Sen. Johnson, it was agreed that Bomiâ€™s senate seat be reserved for the NPP in the pending election. But Tyler argues that the coalition is yet to pick a candidate in the county for the midterm election.

As Liberia moves closer to bi-election, the political climate in Bomi grows tense with more and more names popping up. Some of the names include Adama Dorley, a youth activist; Roosevelt Tuley; Ousema Dukley; and former Senator Lahai Lansana.