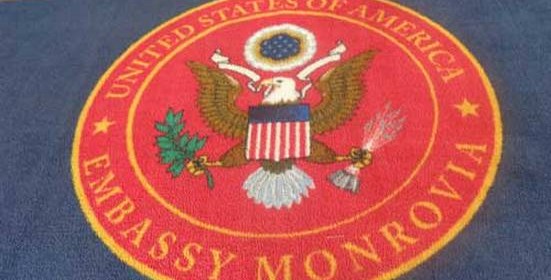 MONROVIA, Montserrado â€“ The United States Embassy in Monrovia has announced, with immediate effect, a temporary suspension in the issuance of non-immigrant visa in Liberia. The embassy made the disclosure on its official website on Monday, Dec. 9.

According to the announcement, all previously scheduled non-immigrant visa appointments are affected by this suspension and must be rescheduled subsequent to the lifting of suspension. Non-immigrant visas are issued to foreign nationals wishing to enter the U.S. on a temporary basis, including for tourism, medical treatment, business, temporary work, or study.

â€œWe will reschedule all applicants through our online appointment system as soon as possible; you will receive further notification from us at that time,â€ the embassy said in the announcement.

â€œWe regret there are no slots available for rescheduling at the moment.â€

Visa applicants with genuine emergencies who qualify under specified terms outlined by the embassy may, however, utilize an expedited to request for a non-immigrant visa expedited visa appointment.

According to the embassy, this privilege applies especially to applicants who are citizens of a country that is a Visa Waiver Program partner, and those who are dual nationals of Iraq, Iran, Sudan or Syria, or those who have traveled to Iraq, Iran, Sudan, Syria, Libya, Yemen, or Somalia after March 1, 2011. Liberians, therefore, do not apply.

No official reasons have been provided for this abrupt suspension of non-immigrant visa issuances in Liberia, except a reference to the U.S. Supreme Courts decision which allows the continued implementation of Presidential Proclamation 9645, limiting nationals from specific countries from entering the United States.

But the suspension may well be connected with new measures by U.S. immigration authorities to penalize countries whose citizens have frequently overstay their visiting and other non-immigrant visas.

The Wall Street Journal reported in April that U.S. President Donald Trump and officials of his government were considering new rules to address the situation of visitors who overstay their visas, as part of a broader program to curb immigration to the United States.

The effort, according to the Wall Street Journal, will target nationals of countries with high non-immigrant visas overstay rates, which is 10 percent or more.

Liberians have historically chosen the United States as their favorite travel destination due to the historical and cultural ties between the two nations. In 1822, a group of black former slaves from the United States settled and established the country, bringing with them American ideals, government, religion and culture. The relationship between the two countries have, however, ebbed and flow over close to two centuries, and currently has no â€˜specialâ€™ character.

Unfortunately, Liberia is listed in the category of over-staying visitors, along with Chad, Nigeria, and Eritrea.

In a previous communication, the U.S. Embassyâ€™s Public Affairs Section informed The Bush Chicken that some 12 percent of Liberians visiting the U.S. in fiscal year 2015 overstayed their visas, and are either still in the U.S., or returned long after their visa expiry date.

Liberia, according to the communication, also currently ranks fourth after Cuba, Afghanistan, and Mauritania, as one of the highest U.S. visa refusal rates in the world.

Sharing
Tags Donald Trump, US Embassy
Contributions to The Bush Chicken are not tax deductible.